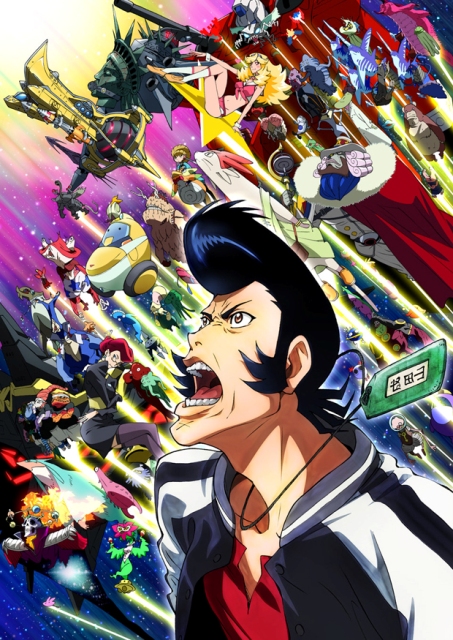 Per Matt
Let it be known that the script writers of Space Dandy have heard the speculation by the fans!

Season 2 begins with the episode, “I Can’t Be The Only One, Baby,” which not only fans the flame of storyline speculation, but it also fuels more questions than answers.

Hoping to encourage Space Dandy and his crew to consider a career change (they happen to be the worst Alien Bounty Hunters ever), Scarlet suggests checking out Space Career Change Magazine for some new ideas. While skimming through it, each of the so-called bounty hunters reimagines their partners-in-crime as being competent crewmembers.

As if by design, Dandy randomly tugs on an extra-long hair from his pompadour and activates the Cosmic String, which opens up an alternate universe. The crew visits alternate realities of themselves, including the successful alien hunters, the Space Truckers, the comic-book versions of the crew (including a caricature of Michael Jackson), the Bearbricks, the space ninjas and even a She Dandy, among others.

After the string is pulled too many times, a distortion is caused in the universe and as usual, the episode ends in bizarre fashion.

Not long ago, I interviewed Funimation’s Senior Manager of Social Media, Justin Rojas, who mentioned the multiverse theory in my interview.

This dimensional fray is seemingly a nod to the fans of the anime’s multiverse theory, who speculate how the show can continue when there’s absolutely no continuation between any of the episodes. Obviously, the show’s writers must be trying to address the multiverse speculation by the fans; however, their answer is vague, to say the least. This episode goes beyond fan service, it’s truly meta!

Strength: More enjoyable ridiculousness by the Dandy crew.
Weakness: Season 2 follows the no-continuity theory.
WTF Moment: The most ridiculous version of them all… winds up being the only survivors.

Notable Quotes:
– “This ain’t a cow. This is Grade-A alien.”
– “Merry companions are a wagon in space, baby.”
– “I was a Space Truck Driver before I hunted aliens.”
– “It’s possible that they’re comic-book characters.”
– “Hey QT, you’ve got a pube growing out of your head.”
– “Check out this centerfold. Her underarm hair is in 3-D.”
– “I assure you we have no intention of touching your balls.”
– “There’s something about all of you that’s kind of… Dandy. You know what I mean?”