Zombies… and Other Monsters: Recapping 2013 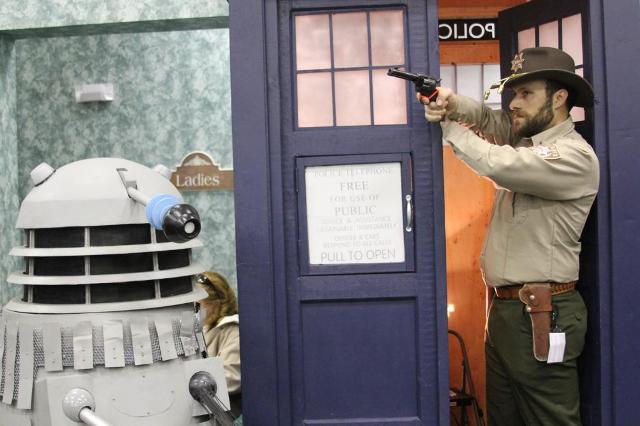 As the undead spread among the masses throughout the pop-culture landscape, Zombies In My Blog was there to report on a little bit of everything!

Just as Showrunner Glen Mazzara was getting a firm grasp of directing AMC’s The Walking Dead into Season Three, moving Rick’s Gang from Hershel’s Farm to The Prison, lots of drama followed them, including removing Mazzara from his post.

As The Walking Dead remains cable’s highest-rated TV series, Telltale Games released its video-game version of Robert Kirkman’s never-ending graphic novel and it won more than 90 Game of the Year Awards in the process. (Season Two of the video game has just begun.)

Matt has become the face of the Webpage, attending many live events and reporting about them here. We were there, in part, at 15 anime, horror and science-fiction conventions all over the country. He also attended two beer festivals, reporting on them, as well.

Expanding our coverage, we dove into seasonal events, such as haunted attractions, concerts, movie screenings, local meet-ups and musicals. Geek culture covers them all!

We had some great celebrity interviews along the way, always eager to speak to a familiar face (usually to discuss the latest undead craze), making some celebrity friends in the process. Matt’s highlight was meeting Bruce Campbell at one of the conventions (so jealous). As a side note, he retweeted our picture of Army of Darkness cosplayers. Bruce is so groovy.

In 2013, we started a new feature for Zombies In My Blog, highlighting a Cosplayer of the Month. It’s been great to meet the larger-than-life personalities behind the costumes!

At Nashville’s Geek Media Expo Volume 5, Matt made his very-first podcast appearance on the Adam and JP Show. Not long afterward, he appeared on It’s a Man’s World podcast, as well.

Speaking of Matt, he created his very first cosplay costume, which was Rick Grimes, naturally. We’ve posted many of his photos via Twitter. He’s also highlighted in the above photo, stepping out of the TARDIS (from Yama-Con).

At Yama-Con, the last convention we attended in 2013, Matt interviewed the convention’s celebrity guests with a video camera, for the very first time, also done while in costume. Unfortunately, technical issues have delayed our publication of said interviews. We will get them posted as soon as possible, we can’t wait to see how they look!

2013 was a very good year for Zombies In My Blog and we look forward to an even bigger 2014! We hope you can enjoy the journey with us! Look for our posts and exclusive cosplayer pictures on Twitter and Facebook as well!