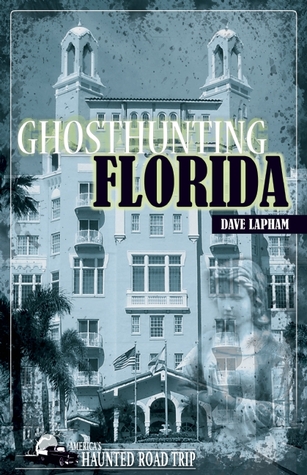 I’m always in the mood for a great tall tale and Ghosthunting Florida doesn’t fail to deliver, featuring 31 haunted locations (along with their ghost stories), which are all open to the public.

Author Dave Lapham admits to not being a psychic, but he has experienced many mysterious events throughout his life. After researching and writing Ghosts of St. Augustine and Ancient City Hauntings, he presents Ghosthunting Florida, which covers the entire Sunshine State. Whether you’re a veteran paranormal researcher, amateur ghost hunter or simply someone who enjoys a spooky ghost story, this is the book for you.

As a book, Ghosthunting Florida is organized by region and highlights specific locations, as well as general areas. While taking this months-long road trip, Lapham traveled with his wife, as well as his “ghost ferret” friend, Joanne, who is extremely sensitive to spirits. Oftentimes, he would team up with local paranormal groups in order to get the backstory to different locations (as well as attempt to get solid evidence). For a few instances, Lapham changes the names of the paranormal witnesses, in order to protect their identities.

Some of the great ghost stories include:
– the ghost of a former employee haunting La Concha Hotel’s Hemingway suite
– Orlando’s former courthouse is possibly haunted by the serial killer Ted Bundy
– The Everglades haunted by the remains of the fallen Eastern Airlines Flight 401
– Miami’s most-powerful Prohibition gangster, Fatty Walsh, lingering in the Historic Biltmore Hotel

Two particularly creepy stories involve dolls. One involved the creepy effigy doll in the Palmer House antique shop. Supposedly crafted in the 1800s, this doll’s eyes continually follow you, creating an uneasy feeling to all passersby. The other involves the Demon Doll, haunted by perhaps a child’s spirit. This doll doesn’t like pictures to be taken of it, oftentimes resulting in dark clouded images covering its face. After an event with a BBC reporter at the Audobon House & Tropical Gardens, the doll mysteriously disappeared. The Weekly World News has offered a reward for its return, but remains missing.

My absolute favorite entry includes the Coral Castle. Having been spotlighted on several different TV shows and Coast to Coast AM, this two-story tower house featuring 235 tons of coral is definitely a destination I’m dying to visit. Nobody knows how Edward Leedskalnin moved the heavy sculptures without the assistance from anyone else (or the use of heavy machinery). He worked at night in secrecy and to this day, it remains a mystery. His spirit supposedly haunts this peculiar location today. I can’t wait to check this out!

Lapham goes into great detail with his ghost-hunting adventures. Sometimes, the stories feel a little long-winded, containing unimportant information. That being said, he explored many great locations, sometimes getting great results. Others were uneventful. Also noteworthy, some of those spooky locations are currently listed on the National Registry of Historic Places in Florida.

I was most fascinated with the North region, specifically those from the oldest city in America, St. Augustine. Unfortunately, there weren’t too many locations investigated here. I’ve visited a few locations in this book, but sadly, I never quite experienced anything unusual. But now that I have a paranormal road map, my chances are pretty good that I’ll experience something extraordinary.

Strength: True-life tall tales are the best.
Weakness: I wish more maritime tall tales and Civil War stories were included.
WTF Moment: The story of Shorty, a ghost horse, sauntering into the Lake Mary Tavern for a bucket of beer, repeating a trend from in its past life, which the neighbors enjoyed immensely in life (and death).