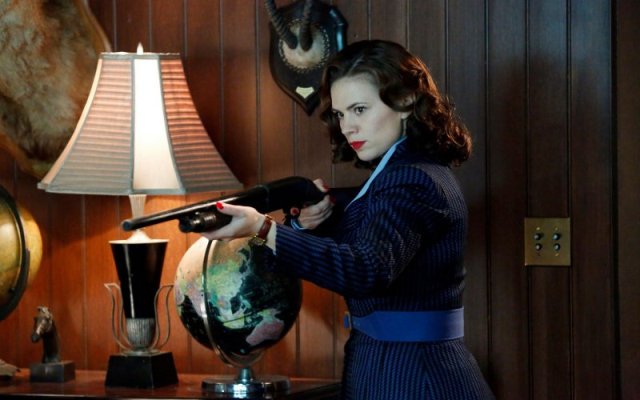 Now that Marvel’s Agent Carter has concluded its first season, what’s the character’s next mission?

The TV show’s miniaturized eight-episode season — all airing during the hiatus of Marvel’s Agents of S.H.I.E.L.D. — ended with a high note.

Much like The Walking Dead, Mad Men and many HBO series, the season received a short order, with network execs unsure if the spin-off would be successful. After the first couple of episodes had great ratings, they quickly fell to average numbers, rivaling the exact same numbers as S.H.I.E.L.D. That’s a disappointment, for sure.

The shadow of Captain America looms large over this series, with references of Steve Rogers making appearances in almost every episode. After the two-hour pilot (which included episodes Now is Not the End and Bridge and Tunnel), the primary focus of the entire first season was intended to prove Howard Stark’s innocence and introduce the presence of the evil organization, Leviathan. Peggy Carter teamed up with Edwin Jarvis, and at times, it was them versus the world.

Here’s a brief rundown of each episode:

The Blitzkrieg Button
Stark ships himself back into the country via the black market, Chief Dooley visits Germany, following a lead to Howard Stark’s disappearance, but only dives deeper into a conspiracy and Peggy acquires a vial of Steve Rogers’ blood from Project Rebirth. Stan Lee makes a cameo appearance.

The Iron Ceiling
Lots of revelations are packed within one episode:
– The Howling Commandos return to help Peggy on a Russian mission.
– Agent Sousa discovers Carter’s dirty little secret.
– Agent Jack Thompson won the Navy Cross medal, but in reality, he is a coward.
– Dottie shows her true colors (Hint: Soviet Red).
– Black Widow gets a partial origin story.

A Sin to Err
Plot-twist episode! Dottie’s officially a member of Leviathan, in good standing. Peggy follows a hunch, trying to find the Soviet assassin who set up Stark. In the process, Agent Carter is charged with being a traitor. And the Russian psychiatrist, helping the SSR, is actually working against the Americans. So much drama!

Snafu
Taken in for questioning, Peggy is accused of murdering her coworker. Jarvis forges Stark’s confession to save Peggy, getting them both into trouble. Trying to gain her superior’s trust, she reveals the truth of her actions, trying to implicate the Russian psychiatrist (who’s actually Doctor Faustus). Chief Dooley takes one for the team, after making a big mistake.

Valediction
LOTS of action in this Season Finale! The SSR discovers the aftermath of the mysterious movie theater hate-gas (AKA Midnight Oil) attack and learns there are more canisters. Howard Stark returns and lures the Russians into a trap, hoping to redeem himself.

Getting kidnapped, Dr. Ivchenko reveals his true mission and hypnotizes Stark, coercing him to fly a plane full of the dangerous gas into Times Square, before Stark snaps out of it. Dottie escapes, the doctor is captured and Peggy pours the remains of Steve’s blood off a bridge, delaying the inevitable cloning of it, used to create other Marvel superheroes. In true Marvel fashion, Arnim Zola makes a surprise post-credits appearance within the same cell as Dr. Ivchenko, foreshadowing the eventual creation of The Winter Soldier, among other HYDRA projects, down the line.

Throughout this abbreviated season, two of the central themes have involved Peggy Carter dealing with the loss of Steve Rogers and (eventually) gaining the respect of her peers. Speaking of her peers, Peggy lost more than a few of them throughout the season. Many were killed off and none were given strong personalities, with the exception of Agent Sousa (Enver Gjokaj), who has the potential to have a strong role in upcoming seasons. His crush on Peggy only makes him even more interesting.

Eventually, Team Leviathan was revealed to be the main antagonists of this season, with Dottie and the Dr. Ivchenko being the face of the organization.

The best episodes of the season featured Howard Stark, with the single-best episode highlighting the return of The Howling Commandos (The Iron Ceiling).

What lies ahead for Agent Carter, if Season 2 actually happens? Hopefully, it gets a longer season, for one thing. And if it’s not too much to ask, please allow Peggy to get some worthwhile coworkers. We correctly predicted the return of The Howling Commandos, their appearance being the highlight of the season. If there’s one incredible wish we could have granted, let Season 2 feature Peggy’s adventures with Ant-Man, himself, Henry Pym. Maybe she can be involved with developing other old-school Marvel Cinematic Universe technology that will be featured in the mythology of future movies.

Strength: A strong female hero within the Marvel Cinematic Universe…
Weakness: Who never got any respect from her male colleagues.
WTF Moment: Each of the male SSR Agents is an interchangeable stereotype… pretty much a waste of time, space and resources.

Notable Quotes:
– “Let’s get started.”
– “I thought you’d be better.”
– “You got a hunch? Chase it.”
– “Hopefully, our package is intact.”
– “You know what I like. Surprise me.”
– “Not everybody came back from the war wanting a hug.”
– “Wow. You sounded just like Captain America, just now.”
– “I know my value. Anyone else’s opinion doesn’t really matter.”
– “Have you ever been hanged, Mr. Jarvis? It’s quite unpleasant.”
– “Monsters are real and there’s none more terrifying than Leviathan.”
– “The Germans are geniuses when it comes to beer, but no one knows bourbon like the the U.S. of A.”