Game of Thrones: A Day in the Life 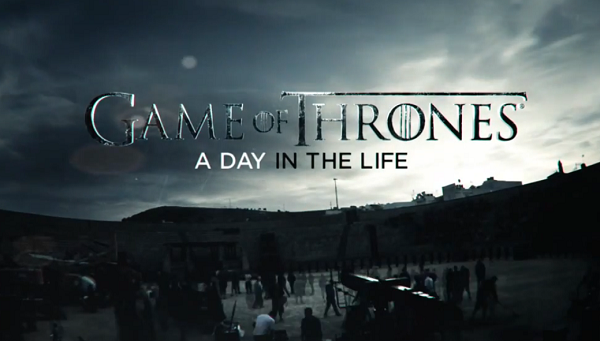 With so many intricate details, Game of Thrones is probably the most complex program ever to be produced for television. Preparing for Season 5, this behind-the-scenes special highlights one day, with on-location filming in three countries: Croatia, Northern Ireland and Spain.

Game of Thrones: A Day in the Life is an HBO documentary featuring many of the filmmakers who pull the strings of the show, creating a cohesive television series. Game of Thrones is the only TV show in the world that shoots with two units, at the same time, all season long. That means 120 days of shooting film for two separate units equals 240 days of screen time… and an editor’s nightmare, for sure!

Producers, directors, costume designers, dialogue coaches, hair stylists and even a couple of actors all weigh in on the filmmaking process. Whether it’s logistical problems of filming in small cities (never much room for parking), moving all the equipment by hand (since there’s no ramps in old cities), or working with a brand-new crew for the very first time, each of the filmmakers has an awesome responsibility for matching the on-screen continuity while filming in different countries. It’s a huge job, to say the least!

Communication is vital, when shooting in multiple countries. Making matters worse, the international cast and crew must fight through crowds of tourists around the world while filming each 10-episode season, often filming at popular historical locations.

Currently, Game of Thrones is viewed in 193 countries around the world.

As a novice on this topic, I hadn’t read a book from the series of novels or watched the HBO TV series, before. I prepared for this special by playing the Game of Thrones video game by Telltale Games and watching eight episodes of the HBO program. There’s so many moving pieces to this show to keep track of: So many names, faces, locations and events… it all gets a bit confusing while jumping into Season 4 of the series.

Featuring many super-dark scenes that are dripping with a creepy medieval mood, lots of violence, semi-frequent nudity, a couple of giants, a wooly mammoth and even some dragons, I’m finally hooked. Several episodes at a time highlight long stretches of non-stop talking, so much politics, so much drama and personal vendettas, it creates a slow burn of anticipation for what’s to come. But when the action sequences finally break out, the wait was totally worth it!

The series features great scenery (The Wall is my favorite) and a wide variety of characters (I really like the Jon Snow, in particular). There’s no telling which direction the TV show will head next, but I can safely say I’m definitely on board as a fan, now.

Strength: The production crew has many manic filming days.
Weakness: Seeing a time-lapse photo of all the people on set would’ve been a great idea.
WTF Moment: One of the most ambitious and complex scenes of the season was filmed for three weeks!

Notable Quotes:
– “It’s the most successful TV show in the world, right now.”
– “This is not the calm before the storm. It is the rehearsal before the show.”
– “We had more than 86,000 applications to be a background extra, in the show.”
– “Game of Thrones is a big event. What you mustn’t do is get put off by the bigness of it.”