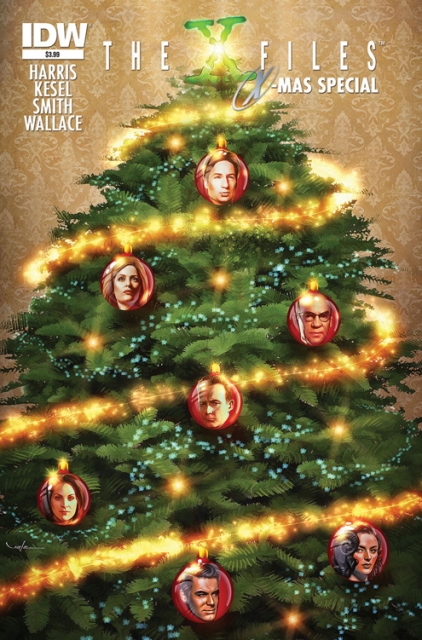 The 2014 holidays may have come and gone, but The X-Files X-Mas Special will live on…

Finally got around to picking up this Christmas-themed comic book by IDW. While long-time fans of The X-Files are no stranger to holiday-themed stories wrapped within the show’s mythology, it may be a first-time experience for newer fans.

The X-Mas Special is a smaller-than-usual trade paperback that features two standalone stories.

In the first story, Season 10 Greetings, Deputy Director Walter Skinner hosts a Christmas party at his house, bringing all the agents (Doggett, Reyes, Mulder, Scully) together for some yuletide cheer. But before they can get this party started, Mulder is caught inside a quarantined shopping mall and Santa Claus may have more than a few secrets up his sleeve. By the end of the story, Mulder finally arrives to find a drunken Skinner (really?) and the party can finally begin.

Throughout all nine seasons of The X-Files on TV, I’m not sure Skinner has ever met The Lone Gunmen before. Regardless, they seem like unlikely party guests, especially since they’re not actual FBI agents. That was a huge problem for me. This story also includes the flashback to a young Fox and Samantha Mulder as children, who attempt to trap Santa Claus on Christmas Eve. After hearing a noise, Fox possibly has an alien encounter. Again, this part of the story feels out of place, when paired with the overall mythology. It seems this IDW series has plenty of plots and story arcs that conflict with the TV show.

The second story, Merry Christmas Comrade! was much more enjoyable. FBI Agents Bing Ellington and Millie Ohio, from the Year Zero miniseries, investigate a possible Communist threat, but instead discover a gremlin up to no good in this Christmas Eve flashback story. This story felt like a great monster-of-the-week episode. It featured great artwork by Matthew Southworth that actually conveys the look and feel of a 1946 storyline. Unfortunately, when compared, the artwork from the first story felt like a lot of scribbling. It was hard to interpret a few key scenes that were integral parts of that story.

The book concludes with three pages of behind-the-scenes material used for creating this comic book, including the script, notes, beginning and finished art, all in various phases.

I really enjoyed the Year Zero storyline, not so much the Season 10 story. Maybe it’s because I haven’t read Year Zero yet; maybe it’s because the Season 10 story feels artificial and the TV-based characters felt a little too fabricated. Like it or loathe it, these holiday-based stories expand upon the overall mythology of The X-Files and that’s something I’ll always be interested in seeing, no matter which new directions they go.

Notable Quotes:
– “Merry Christmas from the FBI.”
– “What’s Christmas without Krampus, after all?”
– “I am hopelessly attracted to the extraordinary!”
– “You should have seen him before the eggnog intervention.”
– “Just ’cause you’re lost doesn’t mean you have to be alone.”
– “Life is about choices, Fox. Tough, awful choices sometimes.”
– “As one of the dark elves, gremlins can’t abide the touch of iron.”
– “Seasons greetings from the Center for Disease Control, I gotcha.”
– “This is the law of the jungle and the fat Man is entering the lion’s den.”
– “Didn’t know if I was going to kiss you or hit you when I saw you, Clay.”
– “From the look on your face you’d sooner believe in Santa Claus than anything I’d say.”