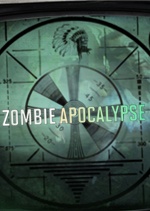 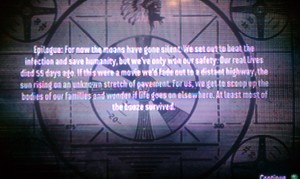 Although Zombie Apocalypse was released back in 2009, it quickly became a bestseller among zombie afficionados.  Recently I replayed the entire zombie shoot ’em up arcade game, completing it within a 24-hour timeframe and I enjoyed playing it just as much as the first time.

I chose to play as Natalie (naturally) and I’d like to rant just for a second about the lack of powerful female characters in video games.  There’s just too few.  OK, rant over.  This overhead, third-person perspective is easy to pick up and hard to put down.  I generally describe this game as Left 4 Dead + Smash TV = Zombie Apocalypse.  In fact, the controller layouts are nearly similar for both games as well.  Both controller sticks are used simultaneously to control movement and weapons firing.  This is not a game of skill; but of patience.  You will die.  Many times.  Having unlimited ammunition and continues are mandatory and appreciated.  Although you don’t need to be an ace at First Person Shooter games to play this, playing them can’t hurt.

Zombie Apocalypse doesn’t try to focus on high-definition zoom-ins, but maintains the overhead perspective throughout. This leads to a couple of my complaints about the game. There is little, if any, storyline provided. No cut-scenes… nothing. A little goes a long way to keep a gamer’s attention. All the gamer gets for character is a few spoken lines of dialogue between levels. And because there’s literally nothing to take you away from the battlefield, it’s all action, all the time. No rest for the weary. The levels include partially destructible environments, which are necessary for many of the upper levels, where the zombie hordes will quickly surround you. A few of my favorites include the graveyard, carnival and snow-filled scenes. Overall, Zombie Apocalypse is and great and addictive time suck.  And Word on the Street Says Konami will release a sequel to ZA in the not-too-distant future. One which traps survivors on a zombie-filled secluded tropical island. One which I can’t wait to play!