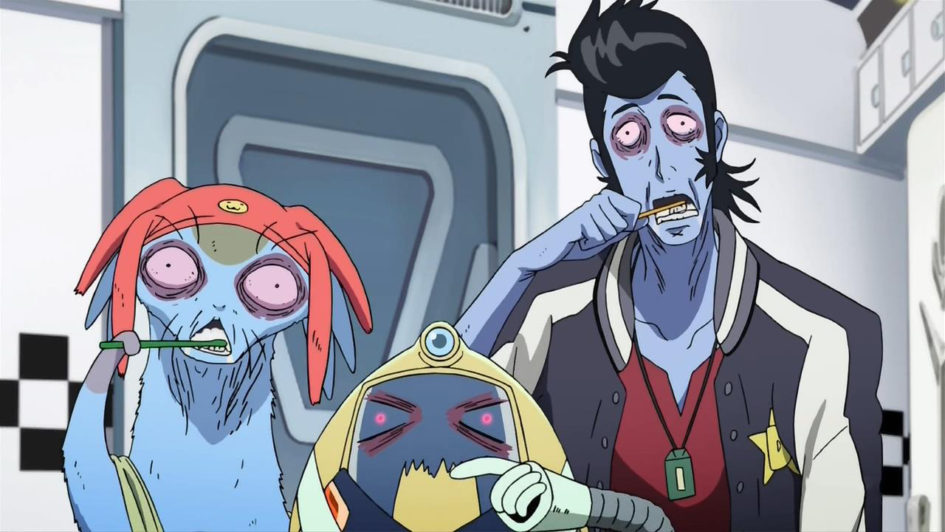 Zombies. Multiverse theories. Separately, these topics can be found in different sci-fi or horror movies, but in the outer-space anime, Space Dandy, these subjects highlighted one of the best episodes of Season 1.

In “Sometimes You Can’t Live With Dying, Baby,” Dandy, our space-faring hero and his alien-hunting ragtag crew (including a talking vacuum cleaner-robot, QT, and an anthropomorphic cat-like alien, Meow) accidentally capture a rare (and undead) creature to process for a bounty and no one seems to notice the resulting Zombie outbreak. This too-little, too-late realization of the main characters leads to a different perspective on life (or a lack thereof). In fact, the entire episode feels like nothing but an homage by production studio Bones (creator of Cowboy Bebop and Samurai Champloo). The Season 1 episode was dedicated to George Romero, which originally aired on January 25, 2014, when the accomplished undead director was still alive. Hopefully, he was able to watch the episode or, at the very least, somebody told him about it.

If you haven’t watched Space Dandy, you should absolutely give it a shot. Only running two seasons, the entire series includes 26 episodes that features bizarre outer space adventures, as our trio of characters hope to find and register rare aliens, creatures, monsters and more to pay for their regular visits to their favorite restaurant, Boobies (a galactic fan-service version of Hooters). Space Dandy is a multi-genre show that welcomes first-time anime fans, as well as veteran fans of the genre. It’s great.

When the series originally aired on Cartoon Network’s Adult Swim programming block, we wondered aloud about the show’s loose continuity. And by “loose continuity,” we mean there’s basically nothing, storywise, connecting one episode to another. Each episode is basically an unconnected Monster of the Week space opera intended to showcase psychedelic science fiction and plenty of juvenile humor. From time to time, the show employs a chaos theory to throw a wrench into the characters’ lives. But most importantly, the multiverse is alive and well, as the writers tend to kill off the main characters or have them wind up in ridiculous situations by the episodes’ conclusion, only to have no continuity whatsoever for the next episode.

As a long-time fan of the series, I enjoyed watching the show for the first time, rolling my eyes at the storytelling but loving the characters, nonetheless. Re-watching the Blu-ray complete series, I wish the storylines could have been a bit more connected, but they’re still enjoyable. Initially, I was worried the writers would kill off every version of the characters imaginable and there’d be nothing left, leading to the series’ conclusion. While that never really happened, it might have gotten close, as there’s only 26 episodes. There’s much more than Zombies and multiverse theories spread throughout the show, including existential angst and odd topics like the best ramen in the universe, galactic street racing and the War of the Undies and the Vests (no joke).

If you’re interested in checking out the show, reruns are currently airing on the weekends via the Toonami block on late-night Saturdays/early morning Sundays or you can pick up the exclusive Blu-ray collector’s edition from Funimation’s webpage, complete with extra goodies. Season 1 of Space Dandy is definitely out of this world!