2022 Brings New Rules and a New Location to BattleBots!

Per Matt
Robot combat will look a little bit different in 2022. BattleBots’ Season 11 marks the 22nd year for the competition show that has appeared on a variety of TV networks. The fans are finally back (albeit masked) after taking a brief break and this year, Las Vegas takes center stage. But that’s not it.

More than 60 teams (and their bots) will be competing this year, beginning with the two-hour season premiere, “Slash and Burn!” Sure, Chris Rose, Kenny Florian and Faruq Tauheed return as announcers for more robot fighting. The wisdom of Peter Abrahamson, aka The Bot Whisperer, is still underappreciated and Lady Luck claims new victims, er, participants in the “fight-capital of the world.” While they’re all still fighting for the Giant Nut, there will be some baptism by fire.

“Delighted to kick off the new year and welcome viewers back into the BattleBox with 14 all-new episodes filled with some of the most intense bot battles we’ve ever seen,” said Scott Lewers, EVP Multiplatform Programming Discovery Factual & Head of Content, Science. “Thursday night robot fighting action’s back and better than ever!”

This year, the BattleBox has added The Upper Deck, which presents new challenges within a smaller area. Each contestant must undertake three qualifying battles before the single-elimination tournament begins. The change of location might actually bring a new attitude to the show. I just wish the season premiere wasn’t showing up in a three-hour block via Dish TV. And with only seven matches within a scheduled two-hour timeframe (the DVR recorded an extra hour of the replay for some reason), there’s WAY too much filler time. That’s just one reason why BattleBots: Bounty Hunters is better!

Ten minutes in and I’m already bored. Uh, oh. I could do without the live looks into the pit, but multiple five-alarm fires were a joy to behold in the first episode. Minotaur gets a new team leader, but we aren’t told what happened to the previous fella. After taking a year off, Free Shipping and Blacksmith return for more destruction. Captain Shrederator created a monumental upset, setting Tombstone aflame, then knocking the antagonist out of commission.

Be careful what you ask for.

Jake Ewert still has a giant chip on his shoulders and he’s still he’s the Big Bad of the show. The main event featured last year’s previously unbeaten and No. 1 seed, Hydra, dueling last year’s champ, Team End Game. For a few moments, the match actually lived up to expectations. That is, until Hydra’s mechanics broke down. Sadly, these opponents didn’t fight for the Giant Nut in 2021. And this fight wasn’t exactly great. Hopefully, these teams will line up to fight one more time this season, with both bots at “full health.”

Out of all of my favorite TV shows, the one I was desperately hoping would return to television during the early moments of COVID-19 was BattleBots. I really enjoyed watching last season’s Fight Night unfold (but Bounty Hunters proved more interesting), although I felt the championship match was truly underwhelming.

I’m absolutely hoping 2022 builds onto the success of last season and improves upon it in every way imaginable. It’s finally robot fighting time! Again! 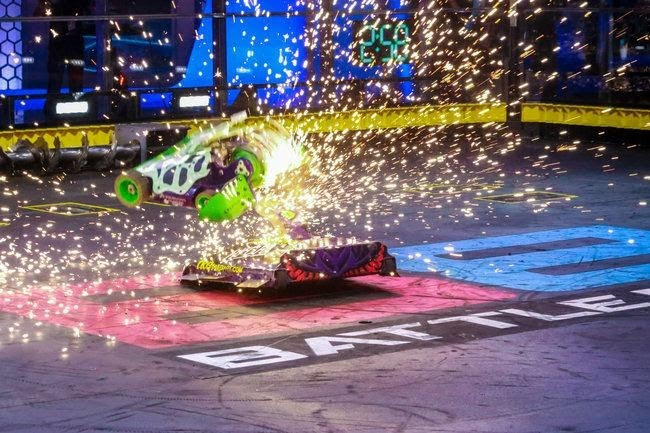