47 Meters Down Dives Into Rough Waters 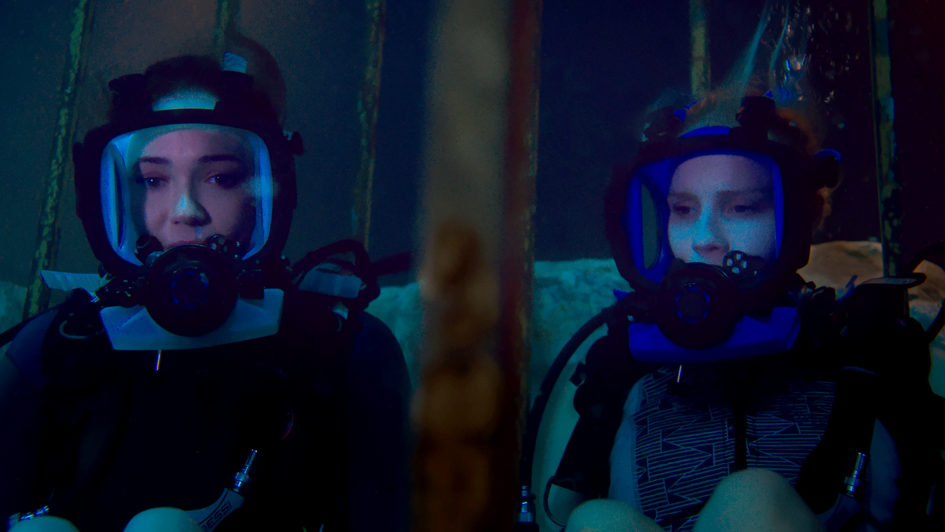 Lisa (Mandy Moore) and Kate (Claire Holt) are stuck at the bottom of the ocean floor after their shark-diving excursion goes terribly wrong in 47 METERS DOWN. Photo credit: Entertainment Studios Motion Pictures.

In the trailers for 47 Meters Down, some critics are saying it’s the best shark movie since Jaws, the seminal movie that defined underwater horror, premiering in 1975. That’s more than 40 years of movies. So, apparently there hasn’t been one good one filmed within four decades? Now, I’m not big on exaggeration, but even I scream at the commercials whenever I see proclamations like this.

47 Meters Down, which premieres on June 16th, tells the tale of two ladies. Mandy Moore is the older, more reserved sister, who is grieving after a rough breakup, while Claire Holt is the younger daredevil of the family. During a vacation in Mexico, they decide to jump into a rickety cage and swim with the sharks before they happen to suffer the worst kind of luck.

Getting into the right mood before attending a local screening of 47 Meters Down, I finally got around to watching a similar-themed movie (it was released last year), which was already on my DVR: The Shallows. Both movies focus on strong heroines doing some ridiculous maritime things (one goes surfing alone in Mexico near a bleeding whale carcass that attracts an underwater predator, while the other throws the main character into a cage in shark-infested waters, without ever taking any previous scuba diving classes). Both females get injured and lose quite a bit of blood. Both characters are quite resourceful in trying to outsmart their hunters. And both women have to deal with the fear of being isolated in strange new places, while trying to survive without much help. Both movies highlight the fear of what’s lurking underwater, featuring multiple jump scares and they’re both rated PG-13. However, this is where the comparison ends.

In The Shallows, Blake Lively’s character has questionable judgement, but she knows how to surf and you want to root for her ingenuity and survival, despite the ridiculous actions of a lone shark. In 47 Meters, Mandy Moore’s grief-stricken character wants the approval of her sister, but looks like she can barely swim, while the majority of the movie is filmed underwater. Additionally, I could never fully sympathize with her character, which isn’t totally her fault. I mostly blame the writer and the director for that. Overall, she seems a little out of place being cast as the hero in an action film. That being said, this isn’t a terrible movie.

Despite being filmed underwater, 47 Meters Down is rough ride and a claustrophobic experience. The cameras get so shaky, at times, I felt like I was starting to get motion sickness. Once you get past the suspension of disbelief (and the cameras calm down), it’s actually a fun film, but it takes some tolerance to get up to that point. I sometimes get nervous about things that go bump in the dark. When it comes to underwater-based movies, that fear seems pretty real. In fact, only four days ago, a North Carolina woman lost her arm in a recent shark attack in the Bahamas, which makes this film’s release seem pretty topical.

The biggest oddity about this movie was actually found off screen. There’s actually more producers (23) for this movie than the number of credited on-screen actors (eight). That, alone, is pretty scary.