Blood Drive Welcomes Us Back to the Grindhouse 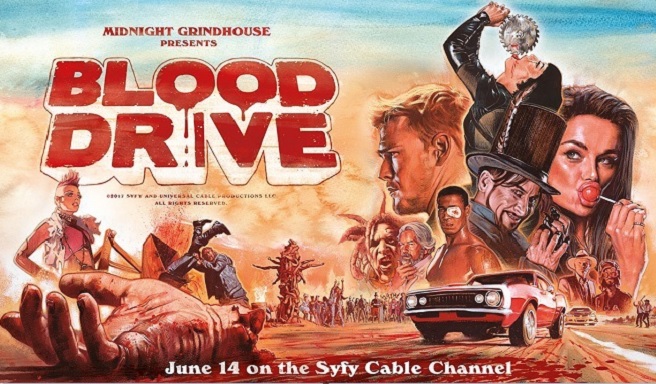 If you guys know anything about me, you know I’m kinda obsessed with anything grindhouse. I’m actually worn out with the idea that all exploitative-type films are just homages to older drive-in films of the ’70s. Grindhouse is now its own art form. Blood Drive takes this idea and runs with it.

The 13-episode series is set in the dystopian future of 1999. There is water rationing, extreme violence in the streets and cars, for some strange inexplicable reason, can run on blood. The privatized police force is dirty and taking rights away from the people. Poor, drug-riddled people are willing to commit crimes and even sell their blood for water. If you want a better life, you can enter the blood drive. This is a multi-state car race using cars that run on human blood. The winner gets a $10 million prize, while last place gets their head blown off. Our central characters are good cop Arthur (Alan Ritchson) and femme fatale Grace (Christina Ochoa), who are paired up for the race of their lives, and perhaps for their lives.

The first episode was gory, campy, and sex is more than once used as a plot point. It’s everything a grindhouse fan would want in a TV show. Director David Straiton is quite the artist, using just the right amount of lens flares, washed-out colors and jump cuts. It’s really beautiful to watch. That said, this is a show that would probably be more fun to watch on a pay cable network or, say, Netflix, but I have high hopes for the show. I’m thinking this could be the grindhouse version of American Horror Story. It’s not exactly easy for me to tell from one episode. I can say that the writers seem to be creating a deep universe and telling a story with mystery and lots of sidetracks. This is exploitation with good writing, something you don’t necessarily see a lot of. I do know that each episode will focus on a slightly different grind genre. From cannibals, to mutants, to Zombies, there should be a little bit for everyone in this series.

The actors seem to be giving great performances. At least, so far. In particular, I enjoyed Slink, the over-the-top host of the blood drive. Played by Colin Cunningham, his character is a deranged P.T. Barnum with a dash of Marilyn Mansion. I’m looking forward to watching his character over the next 12 episodes. All of the actors play their roles very straight, with no sideways performances alluding to the fact that they know they are playing over-the-top characters, whose violent personas delve into the realm of comedy. Which is exactly what a fan of grindhouse films will expect. There are lots of great fun details in the sets, and the special FX are gloriously over the top and very well done. Like I stated before, this is an art form, and the artists put their all in this first episode.

Blood Drive will definitely be a fun summer thrill ride for horror and grindhouse fans. Fun is what you should mainly be looking for in this slick show, it’s not going to have much important social commentary to take away… not even if it tries. That’s OK though, sometimes we all need to have a beer and just enjoy the ride. I give Blood Drive four stars!