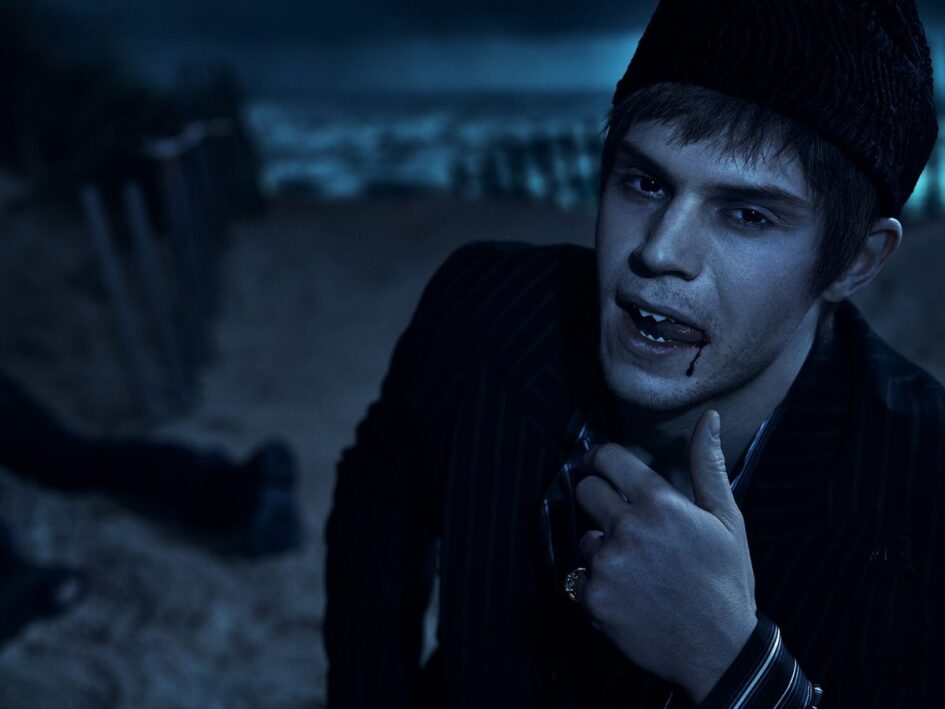 Vampires never really receive full credit as characters. Sure, at one point in time, they used to be human beings who had feelings. But after a hideous transformation, they’ve become bloodsucking killers with one-track minds.

The Twilight franchise proved that these nightmare creatures can have a sensitive side as well, but I don’t really want any of that. I’m all about the classic creatures of the night, preferably the Bela Lugosi, Christopher Lee and Lon Chaney Jr. types. So, when I learned that American Horror Story would bring vamps to New England in Part 1 of the latest season of the horror anthology series, I was pleasantly surprised, although somewhat skeptical…

So many times in the past I have been let down by television series that have featured killer creatures, although their character arcs were always limited. Never really got into The Strain. Had high hopes for NOS4A2 and really enjoyed The Passage, while passing on True Blood and The Vampire Chronicles. Preparing for Halloween, What We Do in the Shadows renewed that storytelling spark and after watching the first four episodes of AHS: Double Feature, I am doubly impressed. The FX Network actually has two groundbreaking, award-winning programs showcasing vampires, for the very first time. That is extraordinary.

The basics of the storyline also interested me, which was surprising: After moving to an isolated beach town during the winter, a struggling writer and his family soon meet the town’s true residents. An undercurrent of illegal drugs and homicides brings notoriety to Provincetown (known as P-Town by the locals), as this small town is nothing like Mayberry.

There’s nothing more addictive than success, just ask Finn Wittrock’s character, Harry Gardner. Escaping New York City for inspiration to rewrite a pilot without distraction, this desolate coastal area seems to provide the best getaway location. But a bad case of writer’s block leads him to a little black pill, one which has different side effects for creatives and non-creatives. True artists will taste greatness with the drug, while all the hacks will turn into violent, aggressive monsters. Every one of which becomes a bloodsucker after taking the experimental drug. The hunger is real, my friends.

“Creepy can be beautiful.”

I absolutely enjoy stories that have different implied themes. On one hand, Red Tide seems discuss illegal drug culture in the real world, where addicts are barely tolerated as if they’re humans. On the other hand, this is totally a showbiz satire, skewering the talentless who constantly fail upward (but only if they’re taking performance-enhancing drugs). Then there’s the bloody good story taken at face value, featuring the “lunatic mimes with razor teeth.” Leave it to Ryan Murphy to flip all the tropes for your enjoyment!

Many of the usual suspects appear in Season 10 of AHS, including Macaulay Culkin as a whacked-out hustler, but it’s Evan Peters who brings Quicksilver’s energy and focuses it into his his character’s addictive personality, stealing every scene as a tempting vampire to our hero, leading him down a long, dark pathway. Sarah Paulson’s Tuberculosis Karen gets a notable appearance as well. But most of all I enjoy the Pale People, with those cool, creaky-bone effects, constantly hissing at humans, full of bloodlust and disgust. Their portrayal is killer!

There is no true “magic pill for greatness,” but withdrawal symptoms and cravings are very real. While they haven’t really been shown as sympathetic characters, they become more relatable with each episode that airs.

Heavy Interview with the Vampire vibes bubble to the surface when Alma, the hero’s young daughter who’s inspired to join the New York Philharmonic by age 18, follows her daddy’s footsteps. These characters rationalize their kills for a better world (who are usually the dregs of society), but they are simply seeking glory. The main theme of being an outsider within a story focused on isolation horror moves into a new direction when The Chemist (played by Angelica Ross) is introduced. Could this all be a morality tale about addiction? Or is the government the Big Bad, yet again?

Though not technically “vampires,” these creatures seem to be similar to those of AHS: Hotel in Season 5.

Having watched four of the 10 total episodes for the whole season (with only two remaining for Red Tide, Death Valley gets four more in Part 2), I’m excited to see what happens next, even though AHS: 1984 was a total letdown. And I’m absolutely hoping these undead characters receive a little more character development that past creatures of the night featured in similar shows.

Double Feature includes two stories — one taking place “by the sea” (Red Tide) and another happening “by the sand” (Death Valley) — so this could actually be two good short seasons of the show airing within one calendar year!