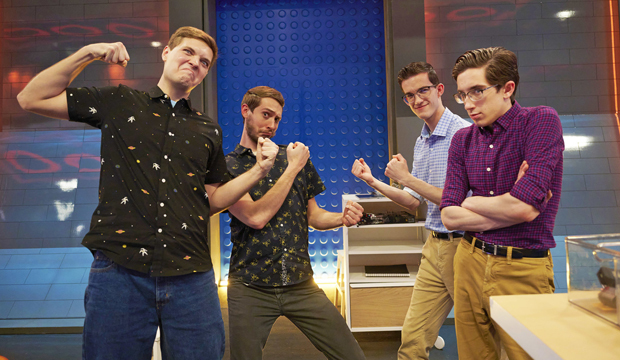 If you build it, they will come. Well, not necessarily for Lego Masters. While Season 2 of the reality game show proved entertaining at a variety of times, the grand finale built up to an average ending, but there was no true cliffhanger.

Twelve teams of two built creations that showed off their imagination and brought movement to their stories throughout the season. Challenges tested for strength, size, wind resistance and damage. Brickmasters Amy and Jamie guided the competitors toward greatness, while host Will Arnett dropped plenty of oneliners. Along the way there were some very good builds, but nothing could top last year’s Star Wars theme.

My favorite episode was not the finale for the second season in a row (which is a shame). Teams were instructed to build castles off the side of a wall, which only connected to 10 measly pieces (resulting in a TRUE cliffhanger!). And it was a size challenge, meaning the longest one built that fought gravity and won was an automatic qualifier for the season finale.

Speaking of which, the last episode gave three teams 24 hours to build whatever they wanted, but they must contain night and day versions. That was probably too broad a challenge for the final builds, bringing some decent creations to life, but previous episodes have brought better. The final three were all pairs of brothers, including Zack and Wayne, Caleb and Jacob, plus Mark and Steven. It shouldn’t be surprising that two of those teams have held the golden brick this season, having won past challenges. The main surprise was the big reveal.

“Everything needs to be bigger in Season 2.”

While Mark and Steven may have officially won the title of Castle Bros, Caleb and Jacob earned the label of Lego Masters (along with a rather large trophy and the $100,000 grand prize). It was Zack and Wayne who were the absolute best technical builders, but their storytelling was kinda shaky. They were my favorite team to root for all season long, whose past creations were so much better than anything their competition created in the finale. It’s apparent they just need a structured theme in order to succeed. Oh, well.

While Billy the puppet brought a little bit of levity to the program, Will’s boss (the actor wearing a fake mustache) had my eyes rolling constantly. The funniest bits by the host were not strategically written by the show’s producers, but happened naturally while the cameras were rolling. I loved those. I only wish there were more.

The winning creation is currently on display at Legoland Florida Resort, which is yet another cool moment of cross promotion, but my biggest takeaway is wondering if there will be a Season 3?

Ratings for the second season finale dropped by almost two-thirds that of the first season. While both seasons have been nominated for a variety of awards, none were won (so far). And it probably didn’t help that three teams of brothers dominated the past season. I took a quick glance at a Reddit chat, where viewers proposed rules changes in future seasons (if they happen), including barring teams of people who have spent long amounts of time together (like siblings or marriages) and pairing complete strangers who showcase different skills. I’d be all in for that!

And then there’s the issue of the builders’ skills. For both seasons, it felt like there were some competitors who were ONLY chosen for their storylines and NOT their technical abilities. These players were dragged along in the game so their stories could be told, even though viewers could clearly tell they didn’t have the right stuff. That was maddening to watch, but hey… brick happens.

Season 1 felt like it had better concepts for challenges and overall, I agreed with its winner. The same cannot be stated for Season 2. If there is a third season (which looks rather doubtful at the moment), I can only hope a few of these concerns are addressed.