James Wan is back at it with his latest horror film, Malignant, released in theaters and streaming on HBO Max on September 10th.

I have been a huge fan of his movies. I just feel that Wan gets it. He gets what horror fans have been asking for in their films for the past few years. My introduction to his work was in the first installment of the Saw franchise. That film was not something completely new, but the twist in the film was unexpected. Saw was fun and felt like a true horror fan had made it.

James then followed that with Dead Silence, which again, was nothing innovative, but did have a spark in it that just called out the horror masses. From that point, it was just a string of great horror films, like Insidious and The Conjuring. I loved each of those films, and when compared to sequels that did not have James Wan as director, you can see an obvious dip in quality.

This fandom I have for the man’s work is why I was excited to check out Malignant. James has yet to disappoint me with a good, scary time. Plus, he was on writing duties as well, which just made me scream, “Shut up and take my money!” This man could do no wrong.

Malignant is the story of Madison Mitchell (Annabelle Wallis), a pregnant woman in an abusive relationship. During an argument, her husband slams her head into a wall. Shocked, Madison locks herself in a bathroom and falls asleep. Upon waking, she finds her husband murdered, and the assailant is still in the house. Unable to escape, she is knocked out by the intruder. At the hospital, Madison is comforted by her sister, Sydney (Maddie Hasson), and is told that her unborn child did not survive the attacks.

The murder and assault are investigated by detectives Kekoa Shaw (George Young) and Regina Moss (Michole Briana White). As more and more brutal murders take place, the pair begins focusing on Madison, who seemingly has a psychic link to the killer, named Gabriel (Marina Mazepa and voiced by Ray Chase).

Madison can see the murders as they happen and can communicate with him. Gabriel has superhuman speed and strength and is horribly disfigured. Trying to find out more about this supernatural monster, Madison descends on a journey that will forever change her. 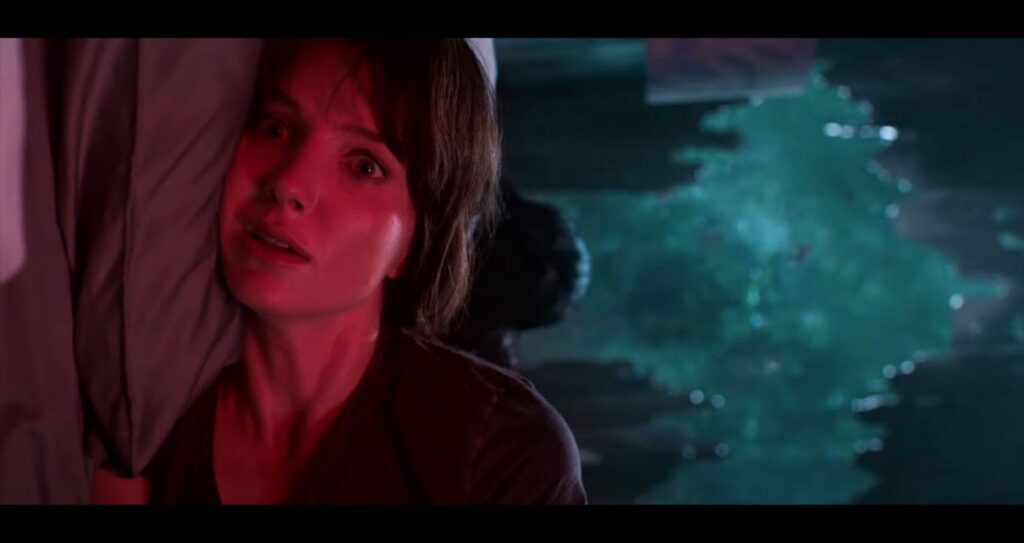 After sitting through Malignant, and then going back and watching it again, I can honestly say that James Wan lost me. Malignant seems to not know if it is a horror movie or a sci-fi film. I know I say this a lot about movies lately, but it seems Hollywood and some great directors have lost focus. Maybe it was Wan’s time away from horror, doing films like Aquaman and Furious 7 that led to the mess that is Malignant. But you definitely do not get the feeling that this is a James Wan-directed movie.

Malignant has a twist in the film. Normally, this can be a great plot point that takes it into a whole new direction. And it does in Malignant, but the twist feels dumb to me. I don’t want to ruin the surprise for those who want to check it out, so I will leave it there. The movie did not need this twist and it felt pointless. If there was a purpose for the twist, I missed it entirely.

The special effects in Malignant also do not look good. Normally, I am OK with CG blood and gore. But Malignant used way too much of both. Mixing practical with CG works great when you combine the two. But the over-reliance on CG ruined a lot of key moments of the film. Plus, Gabriel just does not work as a CG monster. His movements and flow were incredibly bad.

During one scene, Gabriel goes on a killing spree. The whole thing felt like I was watching the Matrix shootout scene in a lobby where Morpheus was being held. Only this time, they used cheap-looking special effects and bad wire models. What should have been an awesomely horrific moment felt like I was watching a teenager’s YouTube tutorial on Adobe After Effects.

I love James Wan’s films for the most part, but Malignant was a huge letdown for me. I give it two out of five stars. Hopefully, Wan will bounce back from this and return to what works within the horror genre. Combining horror with action just does not work for scary movie buffs like myself. I am not saying Wan should only do horror films, ’cause I really liked his work on Aquaman. I am saying he should make either sci-fi action or straight-up horror movies.