Annabelle Comes Home Is A Horror Adventure In Babysitting 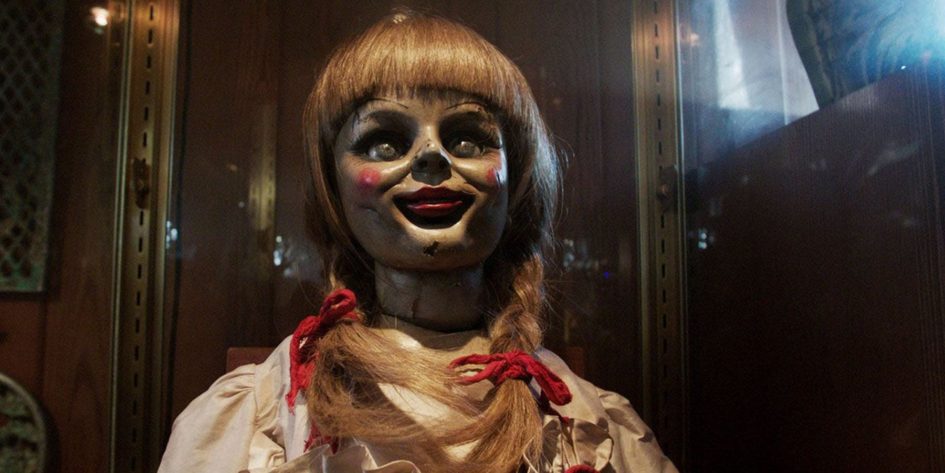 Back in 2013, director James Wan brought to the big screen a movie that would spark a horror movie franchise, defining the horror landscape for the better part of decade. Unlike Wan’s previous franchise, Saw, this new series would focus less on gore and more on supernatural scares. And it introduced people who typically did not follow the spirit world to Ed and Lorraine Warren, a real-life husband and wife paranormal investigator duo that researched countless unexplained events around the world.

The Conjuring Universe was born, and it was fantastic.

One of the great facts about the Warrens was their collection of cursed objects. Many of their adventures led to the uncovering of these items, deemed by the couple as too dangerous to allow to remain unchecked. And over the years, they developed quite a collection of artifacts in their blessed museum, located inside their home. The most famous of these being the Raggedy Ann doll that was named Annabelle.

The demonically attached doll was popular with moviegoers and occult fans alike. So much so that a series of films dedicated to it was created. The Annabelle series told the origin of the doll, as well as how it came into the possession of the Warrens. The series has been terrifying to watch, knowing that there was a real-life occurrence related to it. The films, while dramatizations of the facts, have always been extra creepy, given their backstory.

Annabelle Comes Home is the third movie in the Annabelle series, and is written and directed by Gary Dauberman, in his directorial debut. The film is centered on Ed and Lorraine’s daughter, Judy (McKenna Grace), her babysitter, Mary Ellen (Madison Iseman), and Mary Ellen’s friend, Daniela (Katie Sarife). While Ed and Lorraine are away on a “business” trip, their daughter is left in Mary Ellen’s care. During this time, media reports come out about the Warrens, exposing the already bullied Judy to become an even larger social outcast, on the eve of her birthday. However, Daniella takes a special interest in Judy, and pays her and Mary Ellen a visit, bringing gifts. The gifts offer the distraction needed for Daniela to find her way into the Warren’s supernatural storage, in hopes to finding a way to speak to her dead father.

But as they say, “The road to hell is paved with good intentions.” And after opening the spiritually protected case holding Annabelle, the trio is in for a horrifically evil night. 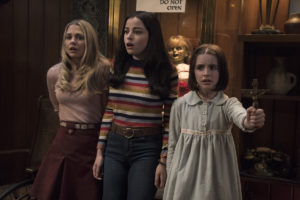 Where the other movies in the Conjuring Universe tend to focus on a more “mature” type of storytelling, Annabelle Comes Home feels more like a Halloween episode of The Baby-Sitter’s Club. The high-schoolers do the usual foolish things you would see in a teenage drama. There is the boy crush, the forbidden visit (babysitters are not allowed to have boys over, while sitting), baking accidents and kids being mean to others at school. The demographics that the film is aimed at have definitely changed, but the marketing didn’t get the memo.

There were lots of jump scares in the film. While these are a staple in the Conjuring films, they seemed awkward and out of place in this offering. Sometimes, the scares were expected (going into a dark room and the flashlight goes out). Other times, the build-up for the jump scare reaches its crescendo, only to just fall off with nothing happening. While there are a few legitimate pops, the failures mentioned ruined them. The same can be said for the humor in the film. There just seemed to be way too many comic-relief moments, and most of them fell flat.

That being said, the film does flirt with several other stories from the Warren’s case files. Those were really awesome to see on the big screen. It is my opinion (just like this entire review) that films based on those creatures and demons would be very good, as they were well previewed in Annabelle Comes Home.

I did like the dialogue between the characters, as well as their development. I started out very much disliking the Daniela character, but as the film continued, I started to feel sorry for her. She starts out more or less like a girl obsessed with seeing the artifacts in the museum, doing anything she can to get into that room. But as her reasoning came into light, I actually started feeling sad inside. If I knew there was a chance I would have a way to speak to my dad again, I probably would have done the same thing. The connection I developed for her was real, and I loved it.

My biggest gripe with the film is how the characters never really tell each other what is going on. Judy sees Annabelle in the house, and knowing that if that doll is out, bad things are going to happen. But rather than telling Mary Ellen, so she can help, she just keeps it to herself. She doesn’t even tell the doll’s name to anyone until much later, which may have clued the others something was wrong (a girl comes to the door and asks Mary Ellen if Annabelle can come play). Just a few sentences and a lot of the bad things that happen could have been avoided or at least let the girls have a heads-up about what was going on. But nope, a lot of that important information was withheld for no apparent reason. It made for frustration at the characters in the movie.

Annabelle Comes Home garners three out of five stars from me. The change in story, focusing more on teenage girls fighting the forces of evil, again, felt like it was just a Halloween episode of a sitcom. The humor in the film was sophomoric and did not feel like it had a place in the film. The scares were trivial and expected. And the misuse of “faux scares” did little to accentuate the real scares, when they happened. Still, characters were believable and even relatable to some. And the story, while clearly focused on a younger demographic, still had its moments that felt perfect in the Conjuring Universe. It is a film you will want to see, I just don’t know if it is a “must-see in theater” kind of film.