Per Matt
When is a gothic horror story not an actual gothic horror story? When AMC adapts a well-known book series and tries to bring a whole new generation of fans to a popular franchise. Anne Rice’s Interview with the Vampire, which debuts during the spooky season, offers a new take on the popular characters.

In this new adaptation, Louis de Pointe du Lac doesn’t begin as the Dark Prince of Iberville… but it doesn’t take much time before he earns that title. Played by Jacob Anderson, this version of Louis is a Creole businessman who makes his living in Storyville, a fictional red-light district of New Orleans that’s swamped in gambling and prostitution. For the first three episodes at least, Louis suffers from an identity crisis, continually running away from humanity as he transforms into an apex predator.

Enter Lestat de Lioncourt (played by Sam Reid). This version of the character is mysterious, yet willing to share his entire world with Louis. If only Louis would reciprocate.

Set during the present day, the story is told via flashbacks as Louis recounts his origin story to loudmouth reporter, Daniel (Eric Bogosian). It seems as if the two have clashed in the past, as Daniel brings up inconsistencies, having previously interviewed Louis 50 years earlier. Sometimes facts are updated with an older-and-wiser perspective, sometimes the story changes entirely. Mostly, Daniel sees an abused-abuser relationship, possibly one involving Stockholm Syndrome. But he tries to ask the right questions this time around, in order to peel back the layers of hyperbole in order to find the truth hidden deep within.

“The Devil is in New Orleans…”

Just to be absolutely transparent, I wasn’t sure if I was going to give this new Vampire a chance. As a horror fan, I usually enjoy a variety of classic characters, along with their built-in tropes. I remember watching the previous big-screen version on opening night in 1994 and taking it at face value, since I’d never read any of the books and later realized I had missed a lot of the intended subtleties. Since Halloween is around the corner, I dove into the first three episodes and realized this show was never intended to be a true horror story. It’s a modern love story with horror elements sprinkled in between its slow sections, in order to keep the audience awake.

Call it the Twilight adaptation, if you must.

While the show pays respect to the author, the city and the characters, these aren’t the pale-and-veiny creatures you may have grown up with. The creators of this show were less interested in exploring vampire powers and more about the burden of existence, loss, regret, alienation, loneliness and what you have to give up becoming a vampire. By the third episode, Louis attempts to be better than the human race, eating only animals and not people, while Lestat sees hunting and eating as one in the same, regardless of what his prey may look like.

Will this show evolve into another version of Dexter, where only the bad guys are killed? Highly doubtful, but the one thing the show does so very, very right is bring the atmosphere to life so beautifully for this time period. 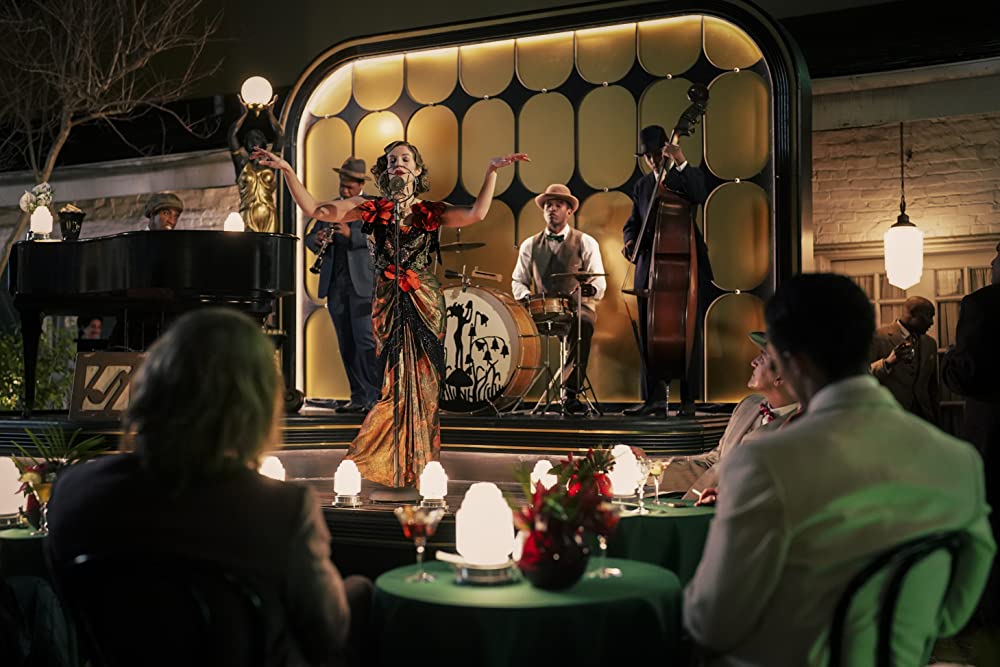 The entertainment is to die for in Anne Rice’s Interview with the Vampire. Photo by Alfonso Bresciani/AMC.

According to the filmmakers, this show is just as much a love letter to New Orleans, as it is for vampires. But I see it from a slightly different perspective. The atmosphere is even more important than the story, sucking the viewer into the scenario as if you were there. There’s a huge difference between using a green screen or a very cheap art budget, and something this real.

The Jazz Age comes alive as Louis and Lestat walk up and down Storyville, which is based on a real place that no longer exists (1900-1917).  The production design is unreal and quite a few outdoor scenes were actually filmed within the French Quarter, but the “vampire design aesthetic” is second to none. This looks like a very expensive series, and I’d imagine each episode costs more than $1 million to produce. AMC better get its money’s worth, as this isn’t the only Anne Rice production that will debut on the network.

The Mayfair Witches will debut in early 2023, giving the network a couple of franchises to build from and since The Walking Dead mothership is finally closing its doors, Anne Rice’s influence will be scattered all around the channel. It’s just too bad she’s not here to see it, herself. She died at age 80 during the early stages of this show’s production.

She was loudly opinionated and originally hated Tom Cruise’s Lestat. I’d love to hear her opinion on this version of her best-selling book.