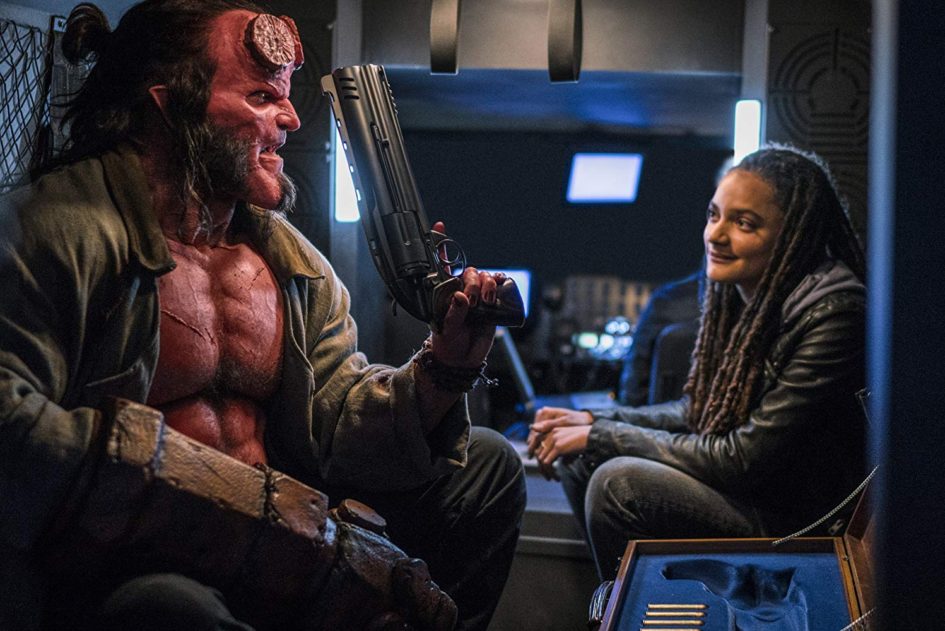 David Harbour and Sasha Lane make their plans in Hellboy.

Back from the dead, the Hellboy franchise returns to movie theaters fully rejuvenated after an 11-year hiatus.

With the red band trailer’s release this week, the upcoming film was trending everywhere via social media, especially on Twitter, where there was a lot of positive reaction. While this film doesn’t get an official release until April 12, 2019 in the United States, there’s plenty to look forward to and try to figure out before audiences get to fully experience it on the big screen.

As the official tag describes the upcoming movie: “Based on the graphic novels by Mike Mignola, Hellboy, caught between the worlds of the supernatural and human, battles an ancient sorceress bent on revenge.”

That’s a pretty good hook… the scenes look gory with a supernatural feel and what looks like a Hell on Earth scenario, which all look intriguing, especially when the sorceress in question (Nimue the Blood Queen) is portrayed by Milla Jovovich! And that seems to be a terrific casting of the character, as the actress is well-known by genre audiences, having been featured in The Fifth Element and the entire Resident Evil franchise.

David Harbour takes over the reins as Hellboy, previously portrayed by Ron Perlman (who basically owned the character). You may recognize Harbour from Stranger Things, Suicide Squad and The Green Hornet, so it’ll be interesting to see his take on the character. There’s no Doug Jones or Abe Sapien appearing this time around, so that’s somewhat of a letdown. But what about that Asian-character controversy? Ed Skrein was originally cast as Major Ben Daimio, but once the actor learned the character had a Japanese-American background in the Dark Horse comics, Skrein withdrew from the role, hoping for an Asian actor to be cast. The character is now portrayed by Daniel Dae Kim (Lost, Hawaii Five-0). Seems like a much better choice for the role.

Also, this time around, Creator Mike Mignola has taken a hands-on position for the reboot, hoping to focus more on the darker tone of the source material, aiming for more of a horror movie and and less of a superhero storyline. That also sounds like a good filmmaking decision in order to differentiate it from the Marvel and DC Cinematic Universes.

So, how exactly will Neil Marshall’s version differ from Guillermo del Toro’s? Having previously directed genre shows like Black Sails, Game of Thrones, Hannibal, Constantine, Timeless and Lost in Space, it’ll be interesting to see this filmmaker’s take on the big screen. After del Toro won two Academy Awards for The Shape of Water, it’ll be a comparison that will probably be unfair.

In showbiz terms, waiting 11 years to reimagine a movie and restart a film franchise in this era of blockbuster comic book movies has been plenty of time. The previous two movies were very enjoyable, although performed slightly disappointing at the box office. Hopefully, this new version can bring in a new audience in order to bring the franchise back from the dead. Taking on the horror genre, it only feels natural for this type of movie.