The Arrestingly Entertaining Tale of Barry Seal: American Made 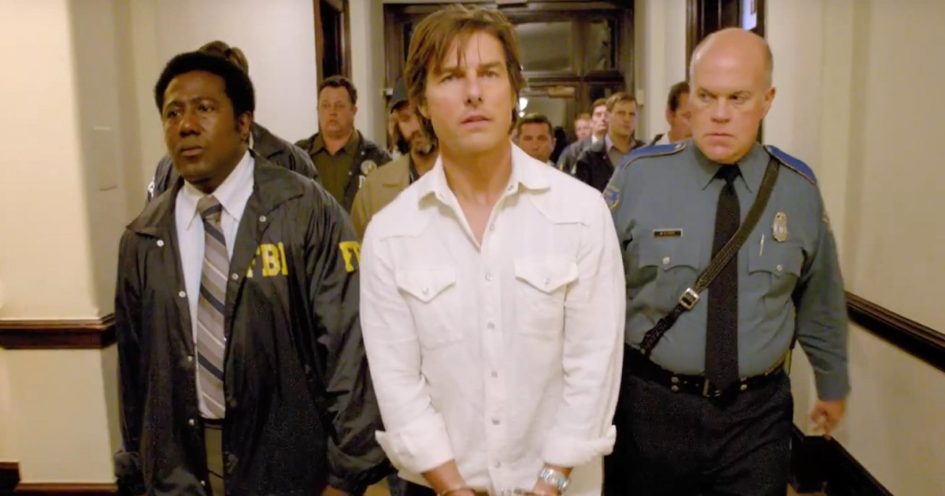 Tom Cruise in American Made.

Yes, that was the original working title for this humor-infused based-on-a-true-story film, which follows the smuggling career of Barry Seal from ditching his airline gig, to his empire built in the would-be namesake of the movie — Mena, Arkansas — to his unfortunate demise. Along the meandering path, we meet a few household names, such as Ronald Reagan, Manuel Noriega, Ollie North, Pablo Escobar and Bill Clinton — as our antihero zips through the skies with cargo holds busting with cocaine, guns and more cocaine. (Observant viewers may even catch on to a clever insertion of George H.W. Bush.)

Joining Cruise’s Barry is his primary fed contact — assuming the name of “Schafer” — played by Domhnall Gleeson. Mr. Gleeson successfully sells the idea of a government agent who is really kind of a nerd for all things spycraft, is a bit lovable, but also ultimately just as appropriately slimy, as you’d expect. Sarah Wright brings her smoking-hot looks and very-believable small town girl act to bear with good success. Her characterization of Barry’s wife, Lucy, is ideal, though many of the details of the story take creative liberties. Rounding out the primary cast is Lucy’s brother, JB, who is played by Caleb Landry Jones, and a fabulous source of comic relief. Toss in some well-represented drug lords, and American Made cashes in.

Gary Spinelli has delivered a very well-written film — a tale which could have been much more pedestrian than the spunky story on the screen. Capturing just the right moments of the rather complicated web woven by Seal over his crooked years is no small feat. There was a very real risk in this film’s development that it could emerge with more of a documentary (or mockumentary) feel. Luckily, Spinelli and the cast fuel this film for takeoff and do not let up till the credits roll.

Made is not without its holes. There is no on-screen reconciliation regarding a family member’s death. The story jumps around a little, as Barry tells us his tale in cut-in scenes representing videotaped accounts of his life. Some of the twists and turns of the government and law enforcement plot-line seem to be only lightly integrated on one end or the other. None of this is a big enough drag on the film or to wipe the grin off the face of any audience member.

Any good period film will let music contribute to setting the scene. American Made does this quite well with a soundtrack that’s bound to be a popular album in the coming weeks. The tunes in this movie land on the ears in exactly the proper context with vehicles, set pieces, news clips and characters. Only one puzzling anachronism stands out, in the use of “What Makes A Good Man” by The Heavy. The song fits perfectly with the action of the scene and is a top-notch throwback tune on its own, but happens to be the only modern piece of music at the end of nearly two hours of classic cuts, so the music buffs in the room may find it distracting.

Perhaps the biggest strength of American Made is how fresh it is now, and how fresh it will remain over the next few years as we see countless movies made about Pablo Escobar. While the infamous and illusive Escobar is featured in this film, the story takes place early in his career and he is in no way a focal character. That will be a lasting factor which allows the movie to remain independent of all the inevitable attention the Escobar story will receive in Hollywood. In what may be a happy accident or a deliberate choice, this film serves as a precursor or origin side-story to all of that, as if to dangle Pablo Escobar in the periphery.

See American Made in a theater or at home with several friends. It is a lot of fun, and even more fun when you have people to laugh with you, notice nerdy history details or just kick back and enjoy how proper it is for a smart-ass Tom Cruise to be flying a plane in a movie again.