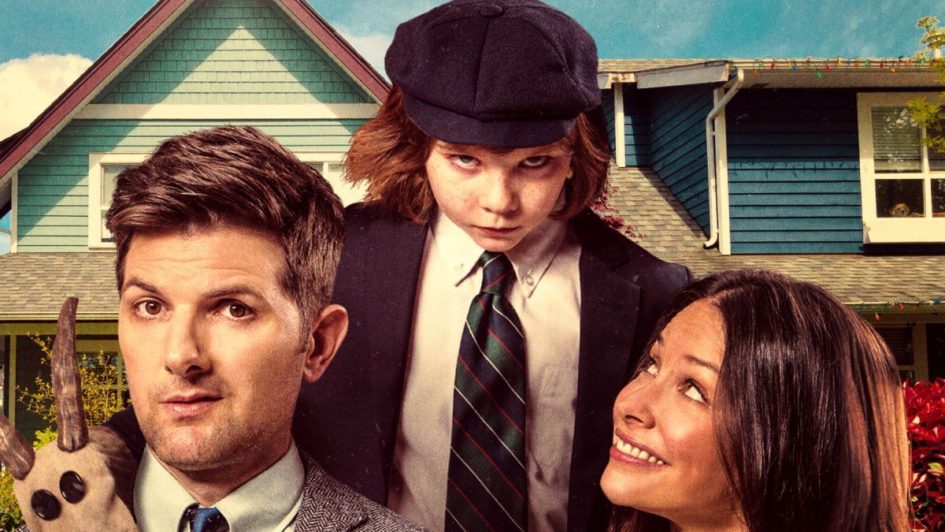 Every single new step-parent has the same fears. Will my spouse’s child accept me as their new parent? Will they love me or hate me? Will they respect me? Very few actually think, “Is this child the spawn of Satan?”

In this episode of #HauntLife, I will be reviewing the new dark comedy, Little Evil from Netflix. This film stars Adam Scott, Evangeline Lilly, Bridget Everett, Clancy Brown and Owen Atlas. Being that it is a Netflix original, you will need a Netflix account to watch, but honestly, how many people nowadays don’t have access to a Netflix account?

In this movie, Gary (Adam Scott) recently married Samantha (Evangeline Lilly). However, during their wedding ceremony, several odd events took place, such as the preacher speaking in tongues and a freak tornado. But Gary played it off as just “one of those things.” Samantha’s 5-year-old son, Lucas (Owen Atlas), seems to have a death wish against Gary, and acts very strangely around him. More and more weird events happen around Lucas, but it is not until Gary notices Lucas causing a clown to catch on fire that he begins looking to religious reasons for his behavior. Becoming convinced his stepson is the Antichrist, Gary enlists the help of his friend (Bridget Everett) and a pint-sized demonic possession expert named Gozamel. However, soon, Gary learns that Lucas is merely a vessel for Satan, and has to decide if he wants to save his stepson from being killed by the Satanic Reverend Gospel (Clancy Brown) or save the world from eternal damnation.

Now, I am not a step-parent. I had been in relationships, before meeting my wife, in which I came into a “ready made” family. It was always a fine line I had to walk. I was merely the boyfriend and most wanted me to stay away from getting close. Totally understandable. So, I cannot begin to say with 100 percent certainty that I would ever ask those questions I posed above, but if it ever got down to “is this child the unholy vessel of the Devil?” I think I may have to re-evaluate the entire relationship.

I have to say I found this dark comedy fun and refreshing. A few times in the past I have tried to watch films that were “dark comedies” that just had no comedic value to them. I watch them and just get bored. Maybe they try too hard to be dark and not enough to be funny. But Little Evil actually made me laugh a few times. The comedic timing between Adam Scott and Bridget Everett made every moment they were together on screen funny. And several of the other characters also added their own brands of humor, including a guest appearance by Tyler Labine as the wedding photographer.

The special effects were spot on as well. I know I normally review low budget B-films — and this film was anything but low budget — but I have seen lots of high-dollar films that scrimped on FX in several places. But the crew behind Little Evil did exactly what was needed to get their story across. I kept expecting some cheesy, Linda Blair-type demon effects, like projectile vomiting or head spinning, but none of that ever happened. The evil child acting evil, without being supernaturally evil, added the perfect creepiness level to him. Well done, effects team!

I give Little Evil a solid 5 out of 5 stars. In fact, I would say that it is a must see for horror fans. The ending leaves room for a sequel, and I hope that Netflix keeps this franchise around for a while and makes a few new ones. Just be sure to keep the comedy in the film, and you will have another piece of dark gold!