The Art of Beer

Per Matt
Craft beer and animation were on tap at The Art of Beer, a one-day exhibit displayed at the Frist Center of Visual Arts.

Associate Curator of Interpretation Megan Robertson introduced the exhibit by discussing the association of alcohol and animated characters in various states of inebriation. Throughout the years, artists constantly use the medium to depict events of pop culture, including the use of hallucinations, over consumption, inebriation and even dream sequences of animated characters. Oftentimes the animators would play alcohol for humor and sometimes they would offer morals or cautionary tales (as in the stories of Porky Pig and Tiny Tunes of Warner Bros.).

Some of the cartoons that were screened included the pink elephants on parade of Dumbo and current examples included King of the Hill, Futurama and Family Guy. I was surprised that The Flintstones animated a commercial for a beer advertisement back in the day, but shouldn’t have been too shocked, since the show was more like a sitcom than a child’s cartoon.

Although there’s few similarities when brewing craft beer and animating a cartoon, each one is developed with an artistic process.

The next portion of the exhibit was a beer tasting offered by three Nashville-based microbreweries: Turtle Anarchy, Jackalope and Yazoo. Each of the breweries offered two beers for sampling and discussed the individual brewing processes.

Mark Kamp Jr. of Turtle Anarchy Brewery presented the Portly Stout and Another Way to Rye, which is a rye India pale ale (IPA).

Snacks were provided throughout the presentation, including popcorn, pretzels and beer cheese, naturally. Oh yeah, there was also plenty of great, local craft beer available, as well.

This animation-paired-with-alcohol event was inspired by the Watch Me Move: The Animation Show exhibit in the Ingram Gallery, which showcases very early animation techniques and experimental works in cartoons and movies, including stop-motion, time-lapse, puppetry, clay animation techniques.

Bailey Spaulding of Jackalope Brewery presented the Rompo red ale and Bear Walker, which is a maple brown ale.

Also on display is Real/Surreal: Selections from the Whitney Museum of American Art in the upper-level gallery, featuring works from the 1930s, 1940s and 1950s influenced by European Surrealists like Salvador Dali and René Magritte. The exhibition includes works by Andrew Wyeth, Edward Hopper, Grant Wood, Man Ray and Thomas Hart Benton, among others.

Maira Kalman: The Elements of Style was also featured, displaying paintings that illustrate the English writing style guide, The Elements of Style by William Strunk Jr. and E.B. White. American Ballads: The Photographs of Marty Stuart was also on display, showing behind-the-scenes depictions of legendary musicians, eccentric back roads characters to dignified portraits of members of the impoverished Lakota tribe in South Dakota.

Make sure you check out these exhibits soon, because they’ll be ending soon. Watch Me Move is on display through September 1st, Real/Surreal is here until October 13th and American Ballads will end its exhibit on November 2nd. 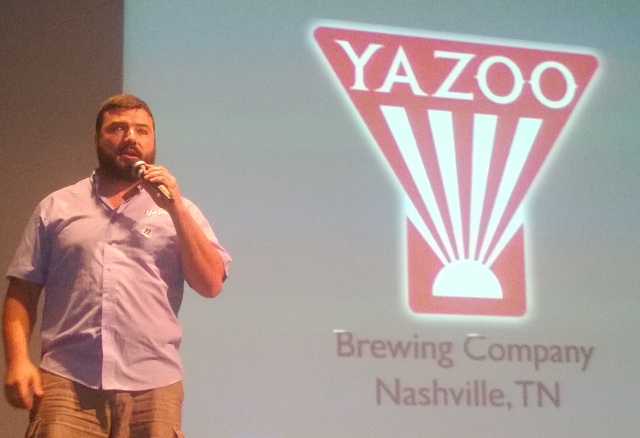 Neil McCormick of Yazoo Brewery presented the Yazoo Fall Lager and the Sly Rye Porter, which is a barrel-aged porter.