Per Matt
I took a trip down memory lane when I visited Game Galaxy retro arcade in Hickory Hollow last weekend.

On my eighth birthday, I received an Atari 2600 and I’ve been a lifelong fan of video games ever since. I tend to prefer the classic games by Atari, Nintendo and others that were lots of fun, even though they were much simpler back then. They had simpler graphics, smaller memory units and less technology than today’s games, all of which gives them their old-school charm. I don’t need to own a high-definition television with a top-of-the-line CPU to run the latest and greatest flash-in-the-pan franchise. Just give me an old-school arcade cabinet with 8-bit graphics and a game with an interesting name and I’ll be fine.

Back in the day, long before consoles became king, there were these things called arcades. This is where video games could be found. They were at malls, pizza restaurants, laundromats, department stores, even at dive bars. They’ve almost gone extinct… until now. Thank goodness Game Galaxy has kept the tradition alive. Offering two locations in the greater Nashville area, I visited the Hickory Hollow location for a friend’s birthday party and was pleasantly surprised.

The place is packed with many pinball machines and arcade cabinets. I found quite a few of my favorite games and many more I didn’t even know existed. In fact, my rule of thumb is to judge every arcade by the quality of their Ms. Pac-Man machine. It’s my all-time favorite video game. I just love playing it, but the gameplay must be fast. Otherwise, I pass. That’s just how I roll.

Luckily, this arcade had not one but two great Pac-Man machines. One of which, was the classic Pac-Man coin-op machine. The graphics were decent, but the gameplay was very, very fast. In fact, I spent the majority of my time at this machine, which surprised me. The other Pac-Man cabinet was more of a hybrid, containing practically every old-school Atari game imaginable. I really enjoyed playing Pac-Man Plus on it (a variation game I hadn’t had much experience with, but really liked it).

There were lots of movie-related pinball games, including The Simpsons, Demolition Man and Tron: Legacy, but one in particular offered a dizzying array of bells and whistles. While I was checking out Iron Man, I was getting schooled by a local pinball fanatic. He was a pro. He was loud. He knew what he was doing. As he was walking me through the game, he told me that someone accidentally unplugged the machine and wiped out the machine’s high score, which he owned. Naturally, he spent the majority of the day trying to get it back. The game is intense. For someone easily distracted by strobe lights, loud noises, a video screen and moving action figures on the gameboard, it’s not a game I’d enjoy or excel at (but it looks cool).

Walking around, I recognized some older games from my Pinball Hall of Fame: The Williams Collection on my XBOX 360. Noteworthy classic pinball games like Pin*bot, Gorgar and Whirlwind could be found at Game Galaxy, but most of them were out of order. That was a disappointment. The overall variety of games is great, although not all of the machines were in working condition.

Stepping up to The X-Files pinball game, it only took two playthrough attempts to quickly give up on it. For some reason, the board has a magnet that alters every shot taken, creating a hectic and unpredictable game (much like the creepy TV show). That made me sad, so I quickly gave up. I was surprised to find Baby Pac Man, which is a pinball-video game hybrid and really wanted to play it, but it wasn’t in working condition. 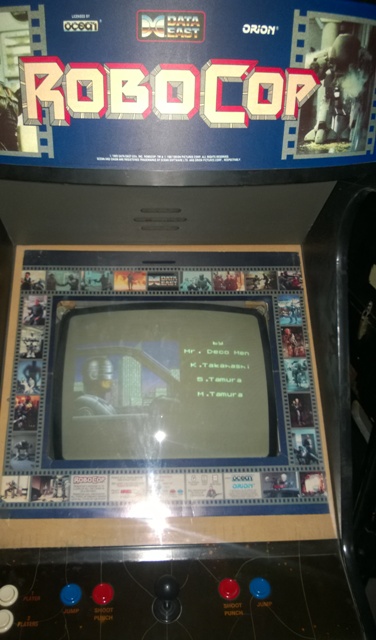 I did have a great time playing the Data East Robocop video game. When I was much younger, I was so proud to have only spent $5 in tokens to defeat the arcade game. Since I paid $10 admission for unlimited play all day long, I was ready to give the game another shot. I’m not going to deny it: I struggled quite a bit. While I may have been a tad more impatient since I wasn’t worried about paying per game, I did have a hard time staying alive. After a while, I finally crossed the finish line and I even had the top three highest scores on the machine! I was even more impressed by my feat when I was younger. I can’t believe I only paid $5 to complete it way back then!

I sampled many games, including Return of the Jedi and the old-school pinball game, The Amazing Spider-Man. But I really enjoyed reminiscing while playing Smash TV. Although I didn’t have a co-op partner, I did have a fun time shooting everything in sight.

Game Galaxy has quite a variety of games to play, including pinball, arcade cabinets and even video games on consoles. Once in a while, they also host video game tournaments as well. There were plenty of people lined up for playing Tekken, Street Fighter, Mortal Kombat and other fighters. I wasn’t as interested in playing them, but I enjoyed the rest of the games.

If you ever get the chance to visit a retro arcade, I highly recommend it! I spent three to four hours having a blast! Make sure to check out Game Galaxy for some great gaming action!