Bad Hair Weaves in Too Many Tropes

Have you ever stopped to think about all the subgenres that exist within the horror movie industry? Taking a quick peek around the internet, we find there is actually no exact “set in stone” list. Wikipedia, the bastion of information that it is, only shows eight subgenres that in themselves appear to be pretty broad. Checking a little deeper, I was able to find graphs on Reddit that break down a whopping 45 lists. That is an amazing breakdown. And it looks like everything is there. Do you like Zombie films? Well, which type: undead Zombies or virus Zombies? How ’bout paranormal flicks? Do you like ones that focus on ghosts, ones that deal with possession or how about occult activities? Its just boggles my mind how many different types of horror movies there are.

Hulu recently released a new horror movie called Bad Hair. This film is listed as a satirical comedy horror thriller, which actually is not one listed on the big list I found on Reddit. I am not sure if I have ever seen another “satirical comedy horror thriller.” On the surface, that seems like a lot of territory to cover. In order for a film to work, it typically has to be more focused. I mean, you can make a great horror comedy, or you can do a satirical thriller, but when you try to do too much, many times you miss the mark and get the film way too diluted.

Bad Hair takes place in the late 1980s. Anna Bludso (Elle Lorraine) works for a television station called Culture, which focuses on Black music artists. Her hopes to move up in her career are put in danger when the current head of programming, Edna (Judith Scott), is fired by the station’s owner, Grant Madison (James Van Der Beek). Her replacement is a former supermodel named Zora (Vanessa Williams). Anna’s fears are calmed somewhat when Zora takes a liking to her, taking Anna on as her assistant and associate producer, but only if Anna updates her look to fit into the station’s new image. Anna gets a weave at Virgie’s (Laverne Cox) salon, which not only helps her become an on-air talent, but also woos her former love interest, Julius (Jay Pharoah). However, the weave has a life of its own, possessing Anna, while committing murders to feed itself.

Yes, the story in Bad Hair is bad. And yes, the execution is equally as bad as one would think. 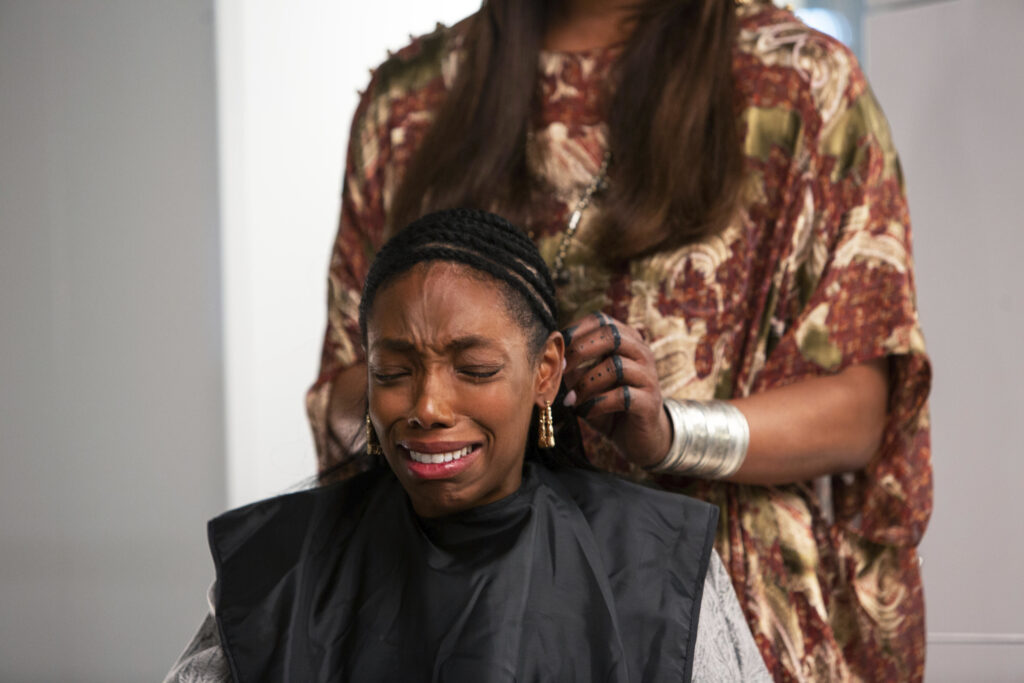 There are so many things wrong with Bad Hair that the film should just replace the word “hair” with “movie.” In a video intro for Bad Hair, writer-director Justin Simien stated that the film is a weird love letter for Black women and the power they possess. I 100 percent agree with him on the power that Black women possess. However, dedicating a horribly written and horribly directed film like Bad Hair is truly a letdown. His love letter is basically saying, “conform to a standard set by others, even if it kills your own identity and values.” Why on Earth would he believe that a film about possessed weaves could be somewhat successful?

If we dive into the horror aspects of Bad Hair, we are left with way more questions than answers. I found myself completely confused on several aspects of the killer hair. Does the hair actually fully possess Anna, or only when it needs to feed? Why was Anna given the hair by Virgie? We know that Virgie knows of its powers, but why did she give it to Anna with only vague warnings that could easily be confused with normal haircare? And when Virgie was fitting Anna with the weave, the gore-packed imagery of the needles going into her scalp and the pained looks on her face should have tipped her off that something was not quite right. So, why did Anna not stop the procedure? I know  all these things are horror tropes, but usually only a couple exist in a well-made horror film. Bad Hair has way too many unanswered questions.

I could keep piling on Bad Hair, but at this point, the film just tried to do way too much. Bad Hair is a story that is 10 miles wide, but only an inch deep. The complete lack of character development, unanswered questions and a complete uninspired cast has earned Bad Hair one out of five stars. Honestly, if I could it give fewer, I would. Bad Hair is really that bad.