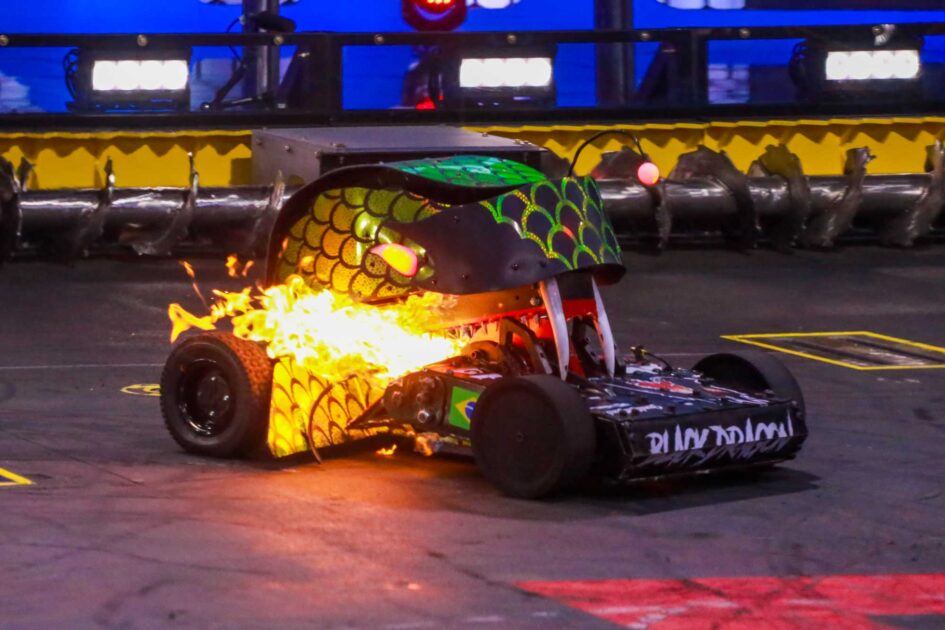 BattleBots takes a bite out of 2020 television.

Per Matt
When the global pandemic was first spreading like wildfire earlier this year, I knew the entertainment industry would soon face some drastic changes. Little did I realize consuming overpriced popcorn and watered-down Cokes at movie theaters would be replaced with watching new programming on my much smaller computer screen. The nationwide closures of movie theaters struck me to the bone and at some point I wondered if any of my favorite TV shows would return, doubting any show that filmed within California would even attempt it. While I will always hope for the safety of everyone involved, COVID-19 initially delayed the season’s premiere, but the robot combat has roared back to life in Season 10 (it’s actually the 21st year of the mechanical competition), featuring 60 teams vying for the Giant Nut.

A repeat champion was crowned at the conclusion of last year’s grand finale (Bite Force is Your Back-to-Back BattleBots Champion!) and last week a spin-off show was announced (BattleBots: Bounty Hunters), which will stream on Discovery+ and premiere on January 4, 2021. But what about the bolt-crushing smackdown of the season’s first two episodes?

There are fewer teams competing in 2020, which could be attributed to the Coronavirus. The reasoning could also be a response to last year’s lineup, which didn’t feel very streamlined at all. And the qualifying rules for making the Top 16 previously felt arbitrary, constantly getting changed. So, I’m hoping 60 teams is the magic number for a more focused show.

Sure, masks were worn by some participants (not all), but the biggest change I noticed as a viewer was the removal of the show’s loud and wild audience. Box-side suites have created opportunities for rival teams to scout or shout at each match, replacing the seating which used to surround the enclosed stage. A couple of times I did notice the show’s production crew standing in for a small crowd outside the suites on wide-angled shots, but I’m fairly certain the show is piping in crowd noise this year (much like the professional sports), which is a bummer. Competition without crowds just isn’t the same, regardless the sport.

I really like hearing the pre-battle perspective from Pete Abrahamson, who’s on-screen role as the “Bot Whisperer” may be the greatest aspect of Season 10, although he’s grossly underused. The bot-builder of Ronin from the very beginning of BattleBots‘ creation is credited as a special-effects wizard. While he didn’t offer his perspective before every fight (I wish he would, though!), I really hope he gets more than only a couple of opportunities to speak in future episodes. In previous seasons, I’ve loudly complained about time-fillers between fights, with boring profiles and visits to the pits made, but I’d really prefer more time spent with Pete before the matches begin. He could give commentary, but more importantly first-hand experience as a competitor. I really hope his presence isn’t wasted this year.

The season premiere fight card included seven opening battles (resulting in six knockouts) before End Game fought Tombstone in the first main event of the year, which was quite eventful. Tombstone used an experimental blade for the first time and End Game used a larger vertical blade than in years past, which produced a major upset and a very quick match. End Game knocked out the Big Bad of BattleBots, spinning Tombstone out of the arena, setting a major tone for the season. Could we have a new champion?

“It better be Nut or bust.”

Three robots were set aflame through two episodes, as legends vs. newcomers was a prevalent theme. There’s more than a few new gimmicky entries, including a 200-lb. spaghetti bot fighting a shark-shaped creation and not one, but two very large entries (Mammoth actually grew to 6′ 4″ in height). Madcatter’s Martin Mason brings a WWE type of personality to the show and the 11-year-old driver of Perfect Phoenix, who just happens to be a genius, has ties to Team Tombstone… could Ray Billings have a Sith apprentice? Speaking of the Dark Side, Ray really is easy to root against, but he may have some competition by Son of Whyachi driver Jake Ewert. His brash, bragging boasts — which he usually backs up — are enough for this fan of this show to hate him, even though he’s a great competitor.

As usual, Donald Hutson’s Lock-Jaw and last year’s champ, Bite Force, are my favorites, so naturally I’m hoping those teams have great seasons. I just hope the new judging system, which was tweaked this year — now awarding points on an 11-point scale, with damage being the largest — doesn’t rob them. Overall, I’m thrilled to have a new season of BattleBots for 2020!