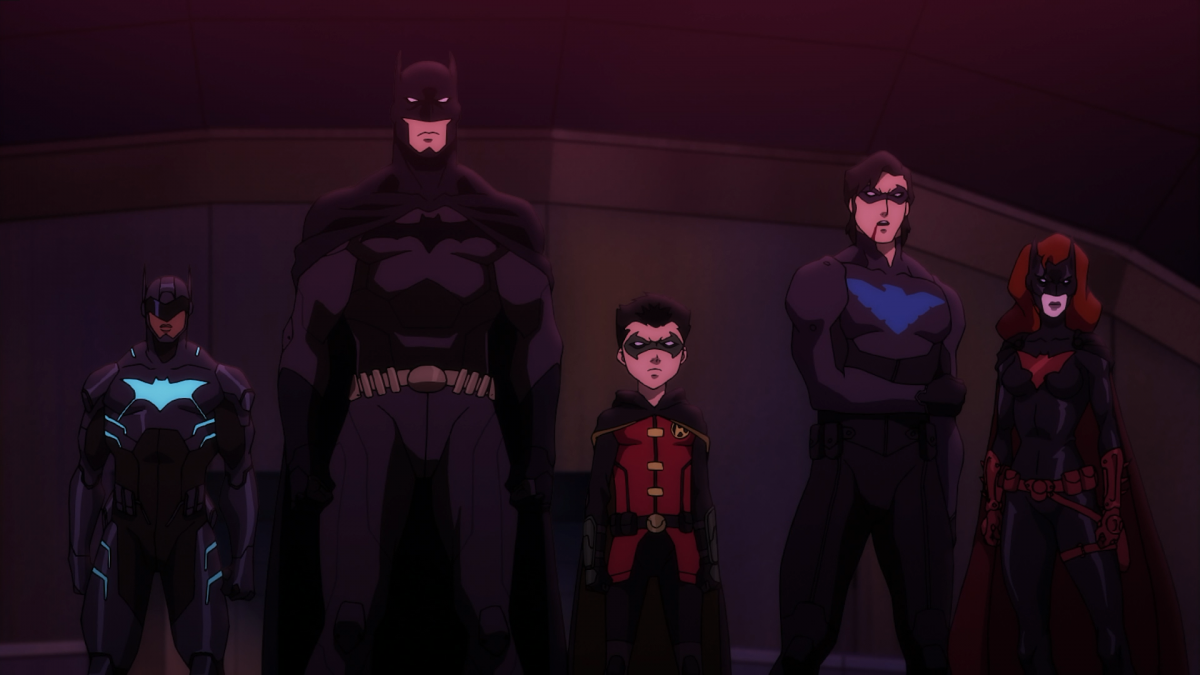 Batman has had quite a catalog in animation. Batman: The Animated Series gained high acclaim back in the ’90s. It accumulated eighty-five episodes, solidified Kevin Conroy’s career, while rejuvenating Mark Hamill’s and IGN named it the second greatest cartoon series of all time, after The Simpsons. Since then, Batman has been featured in more than 10 animated films, and the latest of these, Batman: Bad Blood, is far removed from the original animated series in tone, animation, story and overall execution. To fully enjoy Bad Blood, one would have to be somewhat familiar with the history of Batman throughout the years.

For a one-hour feature, Bad Blood has a lot of players on both sides of the aisle. For the vigilantes of Gotham, there is Batman, Batwoman, Nightwing, Luke Fox and Damian Wayne, Bruce’s son. The antagonists are just as plentiful, yet none are typical with the Rogue’s Gallery of the animated series. They consist of Talia al Ghul, Black Mask, Firefly, Blockbuster, Tusk, Electrocutioner, The Heretic and The Mad Hatter. Because of the short run time and more than a dozen characters to keep up with, the movie seems a bit disjointed, at times. Plot points are rushed, many characters lack depth, and questions arise that could have been answered, had the creators extended the story.

The movie begins with Batwoman confronting a handful of the villains, torturing a man for information. Unlike her counterpart, lethal force is not against her moral code, as she dual wields pistols to even the fight. Once Batman arrives to clean things up, The Heretic emerges in the waterfront warehouse, detonating gas-filled canisters and destroying everything. Weeks pass with no word from Bruce.

Dick Grayson — now Nightwing — takes up the mantle of the bat, in his absence. Once Bruce’s son, Damien, takes notice of his father’s disappearance, he springs to Grayson’s aide in his endeavors. They soon receive a distress signal from Wayne Enterprises as Electrocutioner, The Heretic and Tusk strong-arm Luscious Fox and his son, Luke, into surrendering an unnamed technology, which is locked within the tower’s vaults. A fight ensues, but the brutes get away, leaving Luscious critically injured and Electrocutioner dead.

Meanwhile, in an undisclosed location, Talia al Ghul and her cohorts hold Bruce captive. The Mad Hatter uses a device to peer into Bruce’s subconscious, in order to brainwash him into completing their ultimate plan. Unbeknownst to Talia, The Heretic captures Damien and is killed for his insubordination. The climax of the movie occurs when, at a tech summit, earpieces are distributed that cause the attendees to come under control of The Mad Hatter. In a more even fight (with Electrocutioner and The Heretic disposed of) Batman’s crew overcomes Talia’s and she narrowly escapes before one of The Heretic’s crew members attacks her escape vessel, crashing it into the ocean.

As far as Batman plots go, this one is pretty bland. The villains aren’t nearly as interesting or powerful as Batman’s more memorable foes and the story, itself, isn’t very creative. As the DC Universe pushes forward, there seems to be a need to push forward with newer characters, yet the charm and tone of Gotham just isn’t what it used to be, when the animated universe started. Though hardcore Batman fans may love it, Bad Blood isn’t the type of movie that a casual fan would be thrilled about.