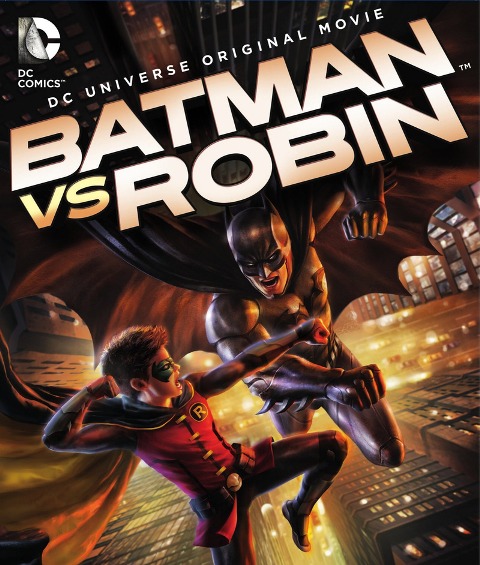 If Bruce Wayne had an illegitimate son who wanted nothing to do with his father and both of them decided to battle each other, that would make a good animated movie, right?

Batman vs. Robin attempts to answer this bad question that nobody asked. Picking up where Son of Batman left off, Bruce has unofficially adopted his son, Damien Wayne, who has picked up the mantle of Robin, as the father-son bonding takes place with masks.

Gotham City will never be the same. There’s plenty of angst to be spread around to each of the primary characters, that’s for sure.

When they’re not battling each other, Batman and Robin slowly uncover a secret society — the Court of Owls — that wants to control Gotham’s future. And to help the court mold the future, a new masked character that goes by the name of Talon, has arrived to “eradicate crime and criminals, once and for all.”

Fighting family and enemies alike, the Batman may have finally met his match.

There’s a lot of baby-daddy drama going on. Bruce Wayne has a hard time bonding with Damien, who is part smart ass — and incredibly unlikable — and has no honor, whatsoever. I stopped reading Batman comics years ago when Talia revealed her love child to Bruce, back when the stories became a never-ending soap opera. Unfortunately, inserting a 10-year-old boy into the Batman ethos changed things up quite a bit, but it’s not exactly up to my tastes. It doesn’t exactly make for a good movie, either. I would’ve preferred more focus on the Court of Owls throughout the years and their influence on Gotham, with less family drama in this flick.

Sadly, I’m not a fan of the “modern artistic style” of this animated movie. This “Batman” looks different, sounds different and feels less imposing that previous incarnations. And the voice actor isn’t that great, either. There’s lots of curse words and the animation is decent, but not that great. For example, almost each of the bad guys wears an owl mask, but they never seem to move whenever each one speaks. This, along with many other elements, makes the movie feel ultra low budget.

While this movie is based on a storyline found in the Batman comics, it’s not one I’d force any enemy to endure.

Notable Quotes:
– “Tomorrow is one dream away.”
– “People like us always wear masks.”
– “At his core, Bruce Wayne is one of us.”
– “As dolls, they can never be hurt again.”
– “This is gonna hurt and I’m gonna enjoy it.”
– “I don’t need to be trained by some circus clown.”
– “You wanna help widows and orphans, punk? Go join The Salvation Army.”