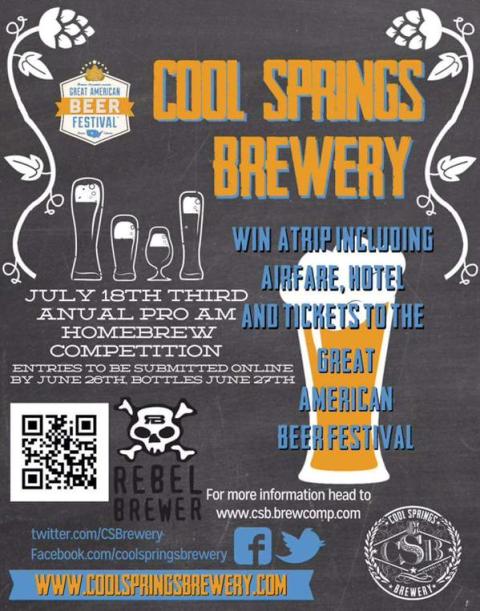 Per Matt
The deadline for entering the Cool Springs Brewery Pro-Am has been extended. That means all homebrewers who are interested in participating need to get their entries into the brewery very soon!

The third annual Pro-Am will be taking place at the Franklin brewery, but the deadline for entering the competition is less than a week away. Friday, July 10th is the online registration deadline, and Saturday, July 11th is the deadline to get all beers into the brewery for competition. The final round of judging will take place on August 1st and is open to the public. There will be some incredible prizes awarded to the top four winners, including the top winner gaining entry and a trip to the Great American Beer Festival later this year, as well as having the winning beer brewed and served at CSB, as well as other great prizes.

Previewing the upcoming Pro-Am, I spoke with Cool Springs Brewery Brewmaster Derrick Morse to get all the event’s updated details:

Please tell me a little about the background of the Pro-Am competition.
– “The Pro-Am started because without me being a homebrewer, there would be no possibility of me being a professional brewer. I was a homebrewer for four years before I became a professional brewer. I remember a lot of the help I received from going to the meetings of homebrew clubs and talking to people about my homebrew. I remember there were several pro-am competitions out in Colorado that I was so afraid to enter my beer into them, so I never did. When I moved here, I realized that one of the ways I could give back to the homebrew community was to run my own pro-am. I wanted to give back to the community that gave so much to me.”

“The Pro-Am gives us an ability to help foster homebrewing in the community, help increase homebrew awareness in our own facility here at Cool Springs Brewery and I really wanted to turn it into a situation where a lot of CSB people get interested in homebrewing. It’s also a really cool opportunity for a homebrewer to be able to enter their beer into the Great American Beer Fest and moreover, they win a Great American Beer Fest trip. We pay for their trip, hotel and airfare.”

This is the third year for the competition. How has it grown throughout the years?
– “The first year, we had about 125 entrants. Last year, we had about 200. We’re expecting right around 200 this year, as well. We don’t give any guidelines because we want people to put their best foot forward. There’s some pro-ams that will say, ‘No sour beers,’ or other beers they don’t want to brew. We’ll do anything. This year, we’re going to see a lot more interesting beers. I think the first year, out of the 125 entries, 50 of them were IPAs. Homebrewers are starting to realize that we want something a little bit more eclectic. I’m expecting to see fewer IPAs and a lot more creativity.”

There’s been a deadline change for all participants.
– “We had some technical difficulties with our Website, so our new deadline is to have beer at our location by July 11th. We extended that time period. Also, to the contest winner, they will get to brew their beer on our system, entered into the GABF, we pay for them to go to the GABF, hotel, airfare and entry, but on top of that, Rebel Brewer has also kicked in a bunch of swag for the second, third and fourth place winners, as well.” 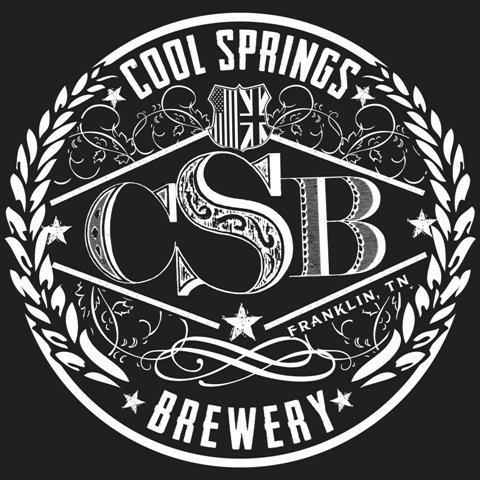 Please explain the competition between different beer categories.
– “In effect, we knew our Pro-Am was going to be a winner take all. Instead of judging all the IPAs against all the IPAs, we decided to essentially do a tournament bracket, like with basketball. You could have the No. 1 beer competing against the No. 64 beer and you never know which one was going to particularly win.”

“We’ve run into situations where one of the best brewers was running up against one of his own beers. He entered five of his own beers and three of those five made it into the Top 16 beers. By no fault of his own, or ours, he knocked himself out of the competition. Last year, we had a winner knock several people out with her American Brown Ale. It ran up against Bourbon Barrel-Aged beers and sour beers. It just happened to be the best-executed and most-creative recipe and that’s what we’re looking for. We’re not looking for something that’s super weird, we’re looking for the best recipe and the best-executed version of it. That person is going to win. We may end up with something that’s super weird. We may end up with a regular IPA. We may end up with an American Brown Ale, again. You never know.”

Was the tournament bracket something you came up with or was that something you saw other competitions use?
– “I’ve never seen another competition do it. Honestly, I just thought about it one day and thought that would be a lot of fun. It’s also a cool opportunity for people to see judges work. One of the things that always bothered me as a homebrewer was I would enter my beer into competitions and I would be notified via email that I won or didn’t win and I wasn’t able to watch people drink my beer. I would get the tasting notes back and I would make adjustments, but I was never able to confront or talk to the judges.”

“This is an opportunity for people to actually visually see how competitions are run. All of the judges that we have for the top 64 are professional brewers. So, it’s not just a BJCP (Beer Judge Certification Program) judge, but a professional brewer that’s judging your beer. Later on, you can go up to them and ask, ‘What did you like about my beer?’ and that would give you some personal feedback. I always thought that was a cool opportunity for people to be able to watch their beer go head to head against another beer. I felt if I was a homebrewer, that would be really fun and exciting to see.”

Do you have any tips for homebrewers?
– “My No. 1 tip that I’ve always hammered into homebrewers is: Fermentation temperature control. I see a lot of brewers who spend thousands and thousands of dollars on all of these elaborate brew systems. They get custom mills and all kinds of different things, but they don’t pay attention to fermentation temperature and they don’t pay attention to yeast health. They’ll buy a package of yeast and just throw it in there, not knowing oxygenation levels, yeast health, not understanding fermentation temperature… those are major, major points that I have really paid attention to in our brewery. If I’m a homebrewer looking towards the craft-beer industry, that’s what I’m looking at. I would rather spend $200 to $300 on a microscope and a hemocytometer to do cell counts and look at the dissolved oxygen in my wort, than to pay for a really nice kettle. I could buy a regular kettle and put it on my stove top and pay more attention to my yeast health and fermentation temperature and have better beer than if I pay $1,000 for an awesome kettle with a huge burner attached to it and not know what’s going on with what’s fermenting in. I would highly suggest that any kind of homebrewer to spend more focus on yeast health than learning about different grains and things along those lines. Learn the fundamentals first and then explore into weird beers.”