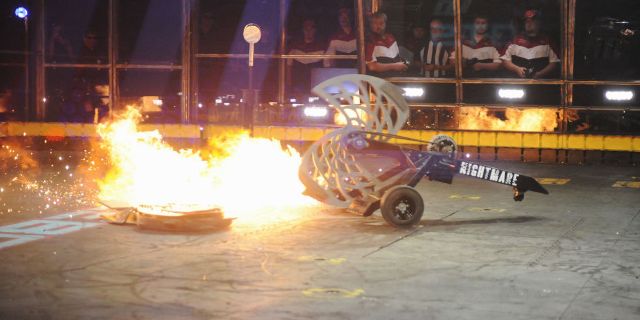 The bots are back!

In the year of the reboot, franchises such as The X-Files, Twin Peaks and Heroes — along with more than a few others that should never receive a second chance — it’s a treat to revisit BattleBots.

Combining sports, reality TV, competition and robots, the intended audience covers a mish-mash of genres, all of which should enjoy this series, watching along together. In this version of the television show, 24 robots will go head to head in the qualifying round, with the losers possibly getting a second opportunity via a wildcard in later rounds.

Each of the battles takes place within the bulletproof BattleBox, which is full of hazards, including saws, screws and hammers. The season premiere episode, The Battle Begins: Qualifiers, Part 1 featured fighters with killer instincts, flamethrowers and even a few upsets. The on-screen action is incredible, but the pre-battle filler felt like a waste of time. There are even links to past BattleBots programs, which aired many years ago. The previous incarnation of BattleBots originally aired on Comedy Central and now moves into primetime on ABC, premiering on Sunday, June 21st.

This show is the perfect cure for the summertime blues! However, catch it while you can still find the fighting robots on the air, since this series is only airing six episodes. Airing on the first day of summer, there’s not going to be nearly enough mayhem to get the series’ viewers into the first few days of Fall.

Hopefully, there will be even more episodes in the near future.

Strength: Robotic destruction.
Weakness: Plenty of time fillers.
WTF Moment: Plan X is a robot with interchangeable weapons and defensive systems… that also has a brain!

Notable Quotes:
– “That brain looks good.”
– “I think our robot’s on fire.”
– “Bite Force may have bitten off more than it can chew.”
– “They play at the intersection of design and destruction.”
– “It’s a machine with a personality, but it can deliver a hit.”