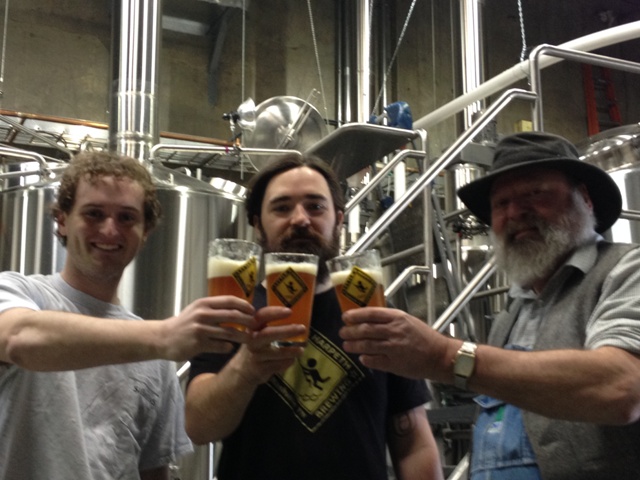 Per Matt
With Nashville’s craft-beer scene thriving, Little Harpeth Brewing has carved a niche for itself by creating unique, German-styled lagers. When I spoke with Little Harpeth Founder Michael Kwas and Steve Scoville, the microbrewery had hosted a great “brew-grass” event that featured three bluegrass bands and plenty of great craft beer.

While Michael is the face of the brewery, Steve is the “Brew Ogre,” in his words. Combined, the two are yin-and-yang partners, equally thrilled to be a part of Nashville and the craft-beer community. In my Beer with a Brewmaster column, I discuss their background in the beer industry, highlight their beer (including the recently released Stax, black lager) and look ahead to possible future events happening at the brewery. 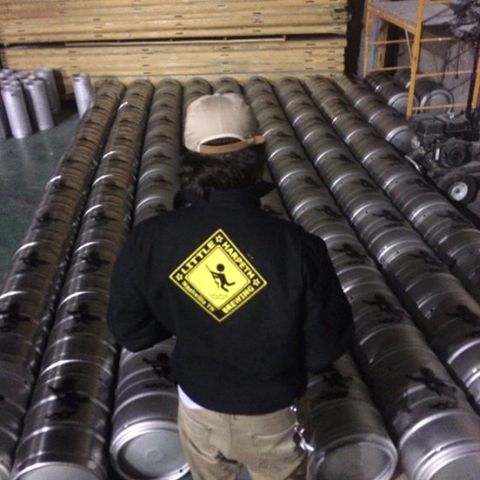 Little Harpeth doesn’t have a Brewmaster. Care to explain?
– “When we were getting business cards designed, I asked Steve — who does all the brewing here — what he wanted for a title. I suggested Brewmaster and he laughed at me and said, ‘I’ve never mastered anything in my whole damn life. And when I do master making beer, maybe I’ll go make wine. I’m just a brewer.’ He makes all the beer. I’m the face of the business. He makes it taste good. I make it look good. I do all the marketing and design work, sales and deliveries. Steve manages the production of the beer, the kegs, the grain hops, the building… everything. We have a nice segregation of duties.”

Tell me the origins of the Little Harpeth Brewing name.
– “I grew up in Bellevue, which is a Southwestern suburb of Nashville, off Highway 100, right where the Harpeth River starts. The Little Harpeth is a section of the Harpeth River. I grew up playing in it, canoeing and fishing… then in high school, skipping responsibilities, drinking beer and hanging out. I wanted to carry that recreational, free-spirited vibe into our business. I think beer is fun and should always be fun. It’s a recreational product that people choose to enjoy in their leisure time. I just wanted to have the nature of that place that’s special to me and a lot of the people who grew up in the Nashville area.”

How did you get into the beer industry?
– “It started with pure consumption. From there, I watched one of my closest friends brew when we were sophomores in college. I did not participate. We ended up moving to Denver together and he taught me how to brew. I was an auditor at a public accounting firm there and got to audit a couple of big Colorado breweries. I was fortunate enough to get laid off by my accounting firm soon after that audit — which was a blessing — because I didn’t have the balls to quit. I got an internship at Strange Brewing in Denver, brewed a couple of times with them, read as many books as I could after homebrewing for two years and then moved back to Nashville, looking around for jobs in the beer industry. Maybe I should start my own brewery in Nashville, where there are so few! Steve (Scoville) and I met through the Music City Brewers brew club and started brewing beer together.”

Did you get to meet any of the home brewers who eventually became brewmasters?
– “Yeah. I remember meeting Karen Lassiter, who’s the head brewer over at Boscos. She had just started working there, maybe a year or two, when I first met her. I felt like I was talking to a celebrity. It became a community and they became friends. It was fun to have been and to be a part of that group. I always say, ‘You can’t survive, if you’re an asshole, in the craft beer industry.’ Especially in Nashville, people just don’t tolerate it. Generally, it’s a very cool group of down-to-Earth, honest people. We couldn’t ask for a better industry and a better market to be a part of.”

Will Little Harpeth have any year-round dark beers?
– “The Stax may become a year-round beer. That is a black lager. You could say the Dunkel is a dark beer. It’s not black, but it is brown. It has some copper hues to it. We’ll probably do a Fall seasonal this year. We started thinking about that, working on a recipe. It’s going to be an Oktoberfest or a Marzen-style beer or some derivative.”

What’s your thoughts on pumpkin beer? It seems to be a hot topic in the craft-beer world.
– “I find it laughable in many situations and absolutely delicious, in others. I love pumpkin beers. My favorite beer that I ever brewed was a pumpkin porter, but you’ve got an industry so set on it… you’ve got guys brewing pumpkin beers right now and they’ll come out at the end of July. It’s just become a stupid race where people try to get their seasonal tap handles out before the season even starts. We will never play or participate in that game. If we make a pumpkin beer, we’re going to make it from pumpkins that we get towards the end of November and it will come out in December or January. When we come out with a Spring seasonal, we’re going to release it when it feels like Spring in Nashville. When we make our Fall seasonal, we will release it when it feels like Fall.”

What kind of trends do you see happening in the craft beer industry?
– “Vertical. It’s just growing so fast… one or two breweries opened every single day of 2013. We’re growing rapidly, but I still don’t think we’re anywhere near close to market saturation. One cool fact that the Brewer’s Association released: In 2013, we reached the highest number of operational breweries that we’ve ever seen in America that matched one prior year. That prior year was 1889, so consider the difference in population. People say, ‘There’s so many breweries in Nashville, there’s like six or eight of them now…’ Then you go to Denver and there’s 140 breweries within a 90-mile radius. Then you’ll go to Portland, Oregon, where the craft-market share is approaching 40 percent and it’s not slowing. The ceiling is out of sight and I think Nashville can support at least a handful of more breweries, considering no population growth, and we’re supposed to double in population by 2025.” 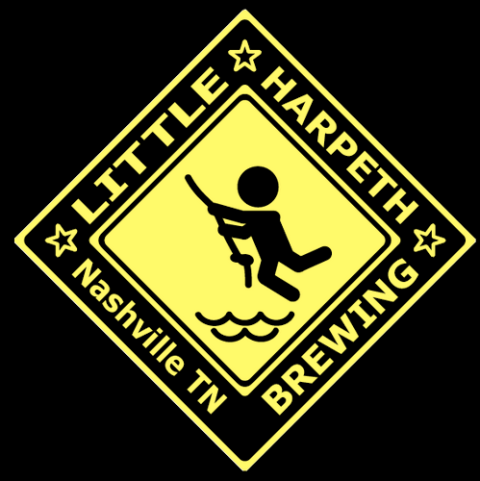 How did you get into the beer industry?
– “Michael Kwas was looking for a brewer and my career in the construction industry was drawing to a close. He stepped into my office one day and said, ‘I’m going to Denver to interview people for a brewer.’ I said, ‘You hadn’t asked me to be your brewer.’ Then he looked at me and said, ‘Will you be my brewer?’ I said, ‘Yeah. I’ll be your brewer.’ That’s it.”

Were you a homebrewer?
– “Yes. I’d been a hobbyist brewer for about 15 years, at that point, specializing in German, continental-style lagers for about 12 of those 15 years.”

While a homebrewer, did you ever enter into beer competitions?
– “Yes I did. I have a box full of medals and ribbons, if you’re interested. (laughs) I quit entering into competitions in 2004, when I got a national ranking in the Beer Judge Certification Program and thought I could spend my time better as a beer judge, trying to help other hobbyist brewers to become better brewers. Coming into the Beer Judge Certification Program (BJCP) has probably done more to contribute success to Little Harpeth than anything I could have done. It’s a great, great program.”

What do you attribute to the growing craft-beer scene of Nashville?
– “It’s probably driven by a market made up of people who were looking for new and different things in their beverages. I have a suspicion that the craft-beer consumer and maybe the people of the two or three generations that are younger than I am are becoming more like European consumers, than they are traditional American consumers. They’re not necessarily interested how much stuff they own; they’re interested in experiencing life.”

Can you tell me a little about your lagers? What makes them unique?
– “They are traditionally brewed with complex, German-styled mashing systems. Our mashing process is anywhere from three to nine different steps. Most craft brewers have one step in their mashing process. We have different types of equipment to do different jobs. Our investment in equipment and our investment in labor and energy and so forth is different than other craft brewers. We hope that our product will find favor in consumers and that in the long run, our investment in additional resources will be worth it. We hope people will like our beers and that we can pay for all this stuff that we bought.”

How was the location for the brewery chosen?
– “We looked at this building early in our journey and passed on it. Matter of fact, the owner of the building drank beer at my home brewery, back before I knew that his family owned the property. The Hetzel family are great people. They’ve been so supportive of us. I met George Hetzel and he said, ‘I don’t like craft beer, but I like drinking your beers.’ Life progresses and we found ourselves talking to George about his building. We passed on his building because conceptually, we thought that a tap room needed to be on the front of a building. It needed to be the face of the business.”

“We chased a couple of other buildings to heartbreaking consequences and finally came back to George. God sent Michael and me on a journey to go through some really hard times and difficult experiences to find a home for Little Harpeth Brewing and in that time we learned a lot about each other. We learned a lot more about the vision of the company and what we wanted it to be. It was just God sending us through our paces. When we looked at the building the second time, I went to the back and raised the overhead door and saw the downtown skyline and it was immediate. The light bulb went on. We can put our retail presence or our face of the business that the public experiences on the back of the building, with the production on the front. As it turns out, putting the production on the front is closer to the utilities, so the installation of our manufacturing system was less expensive, as well.”

Do you have any plans to build a tap room?
– “We don’t know that we’ll ever have a tap room. We’re wondering whether or not the right use for the square footage and for the view might be better used as a special-event venue, as opposed to a week-in, week-out full-time retail operation. That’s one of the things that we’re trying to figure out. We think monthly events might be a good target for us. As a matter of fact, last night I wrote down the words ‘Little Harpeth’s Haywagon Brewgrass Series.’ If you look at the stage, it’s somewhat reminiscent of Austin City Limits.”

I’m guessing that was intentionally done?
– “You gotta be what you is and use what you gots.”