Per Matt:
Ozzy Nelson may be a big-time jokester, but there’s one thing he never jokes about: his beer. He is always serious about crafting very good beer, although there are many zany things scattered about the brewery, including a couple of photo-op gems found within the bathrooms. Even though the founder and president of Mayday Brewery focuses on the quality of his beer, he values connecting with people the most.

Mr. Nelson goes out of his way to show how Mayday takes such good care of their beer. The brewery has a unique jug-filling process and never sells beer in growlers, but always in “jugs of fun.” In the first of a series of Brewmaster interviews, Ozzy discusses his original Mayday, details the background of the microbrewery and previews the upcoming redneck party to be hosted by Mayday, Hot Chicken and Jorts SOUTH!

How did you get interested into becoming a Brewmaster?
– “I’m not a Brewmaster. I don’t brew here. I hire two guys to brew. I don’t consider myself a master brewer. I’m just a regular guy. It’s about beer. I love beer, man, but I’m not a beer nerd. I’m a regular beer drinker, just like most people out there. I’m just a regular guy who wants to make beer — that you can drink more than one of — and love the people. And that’s what I’m doing.”

How did you decide on starting a brewery?
– “All my life, I had been worried that I didn’t know what to do. I didn’t have a plan. I didn’t want to be a fireman or a doctor and that worried me. All I knew I wanted to be was The Man. I’m The Man here. It could’ve been at anything. I have a full-time job. I work at HCA in Internal Auditing. I’ve worked there for 28 years and I’m good at what I do. I’m here when I’m not there. I’m the busiest guy you know, guaranteed.”

What is the significance of “Mayday” to you?
– “‘Mayday’ is a term that comes from my dad. Whenever something goes wrong, it’s a ‘Mayday.’ There’s a lot of Maydays around here.”

How were you introduced to beer?
– “My dad had kids for two reasons: Get him a beer and change the channel on the TV. He was a construction worker. I was getting him beer when I was walking. When I figured out how to flip that pop-top, that was when I started taking my first tips. I just didn’t take too much, or my dad would whip my ass.”

How did you connect Mayday with beer?
– “I was brewing outside, had gone inside the garage, and my wife goes out. She says, ‘You’ve got a Mayday here. It’s boiling over.’ That’s kind of how it began.” 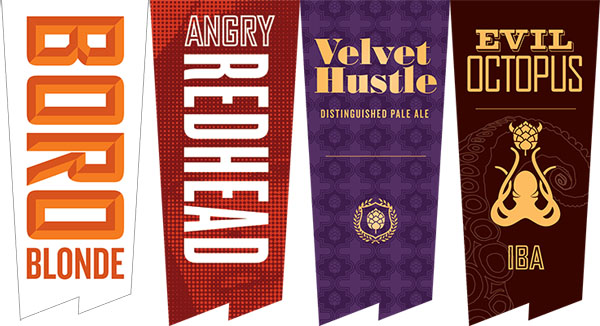 Tell me about your main beers.
– “We try to amp up the fruitiness of the blonde… it’s a chick beer and I love chicks. I don’t want to make a bunch of dude beers. Then we have the Velvet Hustle. It’s a pale ale. The name came before the beer. When this guy introduced himself as the Velvet Hustle, I thought, ‘There’s a beer’s name right there.’ He said, ‘I talked to Yazoo and they may do something with it on a seasonal.’ We have the Velvet Hustle on our regular line-up. The Angry Redhead is a super-good technical beer. As far as that style, it’s just a little bit hoppier and a little bit more alcoholic than normal reds. It’s a great balanced beer and people drink the hell out of it, here.”

“The Evil Octopus is a dark India Black Ale. I don’t like the term ‘black IPA.’ How can it be black and pale? It can’t be black and pale. I say it’s an ‘India Black Ale.’ We make it as dark as we can and keep a lot of honey malt and Crystal 120 in there. We put very little roast in it. Then we hop like crazy, so that hop flavor comes out. It’s just so hard, with all that roast, to get it dark enough and to get those hops. We put twice as many hops in that beer as we do with the blonde. All our beers have honey malt in them except for Jubilee IPA. It’s kind of a signature malt of mine. I didn’t come up with it, but I’ve always loved to use it.”

“Another interesting, nerdy thing about Evil is that it has no pale, base malt in it at all. Usually, when you brew any beer, you’ll have a base malt — which is a pale malt. It’s the cheapest malt. It’s economical and it tastes good. We use 50 percent Vienna and 50 percent honey malt to make up the base malt for the Evil Octopus. Then we supplement that with other malts and put a little bit of roast in it, at the end. It’s a unique beer.”

What beer is your best seller?
– “Out in the market, it’s the blonde. In here, it is a lot more equal. The blonde probably edges everything out, but some weekends it’ll be the Velvet Hustle.”

Do you see a trend of people preferring hoppy beers over the rest?
– “Some people like that, but Murfreesboro is not Denver, Colorado. It’s not even Nashville. I love hoppy, hoppy beers. We do that on small batches. We roll out a small batch every Thursday at six o’clock. It’s 10 gallons. When it’s done; it’s done. That’s where both the brewers and myself will do some experiments on some really hoppy beers or some really malty beers. Yesterday we did a nice honey-infused beer, we called it Quickie Honey. If you come in on Friday, we may have that special small-batch beer or we may not.”

Do you have any seasonal beers to be released soon?
– “We do. I’ve debated the summer seasonal, but we’re not going to be able to handle it. We’ve gotten really busy in the last three weeks. It’s gotten crazy. Demand has exploded. We’ve only had one other spring. Before, I didn’t know what to expect. Soul is the beer we’re committed to do. It’s a dark lager that’s super smooth. When people started drinking it in the tasting room, it just caught fire. We’ll probably start that in early September and have that for the first of October. I think next year, we’ll make 90 barrels — which is almost 2,800 gallons.”

Do you have any plans for making a porter or a stout in the future?
– “We’ll do it in small batches. For probably six weeks, between mid January and the end of February, that’s all we did. Every Thursday we did a different porter or stout.”

Any chance you’ll continue brewing them, throughout the year?
– “Right now, the long-term plans are to sell these four beers. Budweiser made it with one beer… they did pretty good. So, I’m going to hammer these four beers. I’ve already done the Soul, so I have to do it again. I want to do it, just to see the build up.” 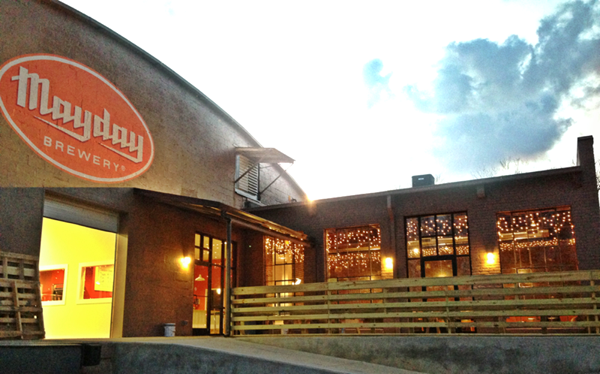 You offer a different type of brewery tour than anyone else. Tell me about it.
– “In my tour, you get a pint glass and we have four kegs set up in the brewery, one for each of our beers. As we go through the tour, I’ve got the Beer Goddess and she is filling your glass, freely, as I open myself up. I say at the beginning of every tour, ‘You can ask anything, I am an open book.’ I will answer any question. If you want a recipe, take a picture of one of the clipboards on the tanks. Scale it down to your own system and brew it yourself. We’re all about the people. When I go on a tour, I know everybody’s name, up to 20 to 25 people. I try to know that person and I want that person to know me, so if they see Mayday out there, maybe they’ll decide to drink my beer. On my tours, I’m all about connecting with people.”

Does Mayday Brewery ever sponsor large events?
– “We kind of get our name out a little bit differently. With our big events, we try to be associated with charities. With Hot Chicken & Jorts SOUTH!, which is happening in August, this is our first time here. It’s a big redneck party. Hot Chicken & Jorts has been in Nashville at Paradise Trailer Park for three or four years. Jubilee beer is the big sponsor of that. All of the profits go to The Oasis Center. We brew Jubilee here. We crown the king and queen of the trailer park to the two people who have the greatest redneck outfits. It is a good time.”

Tell me a little about making an appearance with your beer at the Way Late Play Date.
– “The last time we did it, there were about 1,000 people there. The reason I do it is not so much philanthropic, but to get out and meet the people. At a beer festival, you’re one of at least 30 or 40 other breweries. You’re just one more stop on a drunk fest, man. For me, this is an opportunity to highlight yourself. We had lines forever, man. Instead of standing behind a bar and pouring beer, I’d take a jug to the line and I’d start pouring Velvet Hustle. You can drink Velvet Hustle right now or you can wait 10 minutes to get to the front of the line for some Evil. By the time they got to the front of the line, they wanted some more Velvet Hustle. I’m talking to the people and learning their names, trying to recall them later in the night, just having a good time out there. People see that and it makes them have a good time, too.”

Have you considered entering Mayday Brewery into any beer competitions?
– “I never think about that. I practiced martial arts for a long time and they have all these tournaments with big trophies. Just because you beat this guy under these certain conditions does not make you that good. That’s kind of how I always thought about it. You know, I want to make the best beer that I can make, for the people who are here and around Middle Tennessee. I don’t care if some person from California likes it or not. I’m not ashamed of it, at all. I want my beer to be tasted; to be critiqued. I do that with the brewers and I have other close brewer guys who know beer come in and taste the beer and I make sure we’re doing the right things. Every Thursday we’ll taste from the tank side-by-side with what’s coming from the tap to see which one is better and why. What can we do to make this better and to make it the best of this style?”

What other upcoming events are happening at Mayday Brewery?
– “On Friday, we will have the Free Beer and Hot Wings show here from 102.9 The Buzz. They’ll be here from 5 to 7. We’ll also have three live bands outside. We also have Boro Fondo coming here, which is a bike tour around Murfreesboro. It’s huge in this town and one of the stops is here, during the Free Beer & Hot Wings show. Friday night should be crazy.”