Ben Affleck’s Neither Daredevil nor Batman, He’s The Accountant! 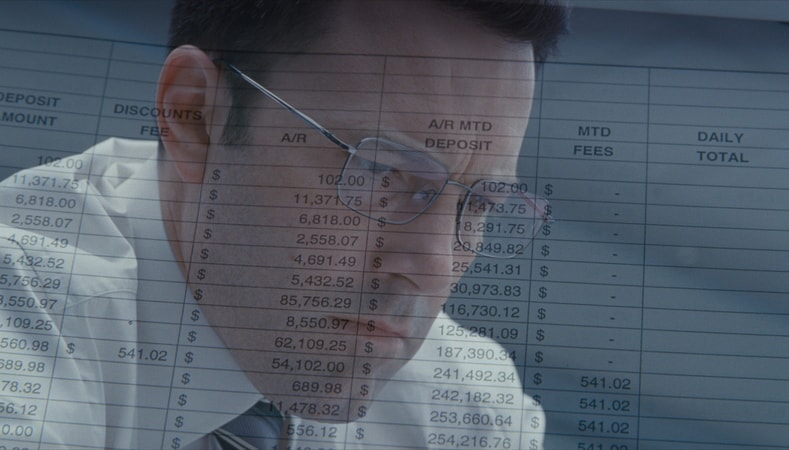 Per Matt
Making fun of Ben Affleck is a little too easy these days. Everyone has taken a swipe at that low-hanging fruit. But through it all, the actor has made some bold choices with his acting roles and he’s done even better with his writing and directing duties. Through Hell and high water, I’ve remained a loyal fan of the actor throughout the years, so it was only a matter of time before he finally showed up in My Guilty Pleasure column.

Stepping out of the background, Affleck made random appearances in late ’80s and early ’90s TV movies and shows before Kevin Smith took notice. Who knew his ’95 appearance in Mallrats would eventually lead the actor to an Oscar? Not really, but the case can be made that 1997 was Affleck’s best year professionally, as he starred in Chasing Amy (in one of the best roles/performances of his career) and he kicked that up a notch with Good Will Hunting, which won him (and Matt Damon) the Academy Award for Best Writing. Many would say that level of success arrived way too early and it did lead to some disappointed follow-ups, but I have always believed that kind of commitment to indie movies is the main reason I have enjoyed watching the actor attain success in a variety of ways.

High-profile roles in Armageddon, The Sum of All Fears and Reindeer Games were balanced with Dogma, Shakespeare in Love, Boiler Room and Jay and Silent Bob Strike Back before hitting a rough patch of his life. A two-year stretch including a relationship (and way too many headlines) with J Lo, as well as appearances in Gigli, Jersey Girl and Surviving Christmas seem to be the low points in both his personal and professional careers. Unfortunately, Daredevil gets thrown under the bus during this time, which is a shame. I’m probably the only person who will admit to actually enjoying this movie back in the day and I’m OK with that. An upturn would lead the actor to better material, including Hollywoodland, The Town and Argo, which led him back into Hollywood’s good graces via a Best Picture Oscar.

It can be debated whether signing up to play Bruce Wayne/Batman in Zach Snyder’s dark version of the DC Extended Universe was career suicide (See the similar effects of Val Kilmer or George Clooney), but I thought Batffleck was the best element of Batman v Superman: Dawn of Justice, Justice League and Suicide Squad combined. I enjoyed seeing an older, more serious version of the Dark Knight Detective and I will miss what Affleck brought to that role.

All of this somehow leads us to The Accountant. Appearing in yet another Warner Bros. movie, this one was different for the actor. Released in 2016, the film starred an autistic math savant with a serious case of tactical training. I remember watching the trailer thinking this was a strange and goofy story, combining parts of Good Will Hunting with some of the action films the actor had previously appeared in. But after finally watching it recently, I came to the realization that together, it all seems to work. Christian Wolff is a complicated character. He doesn’t speak a lot of snappy dialogue like characters in Affleck’s past (the Kevin Smith movies). He doesn’t show off a lot of on-screen personality and many times, he doesn’t even look at his co-stars, as is the norm with the real-life developmental disorder. What he does create is a believable character who’s easy to root for, much like the actor himself.

Affleck has mentioned that this role is one of his Top 5 favorites, so it’s no wonder that a sequel has been announced, which will reunite him with his on-screen brother, Jon Bernthal (The Walking Dead) and director Gavin O’Connor (Warrior). There really wasn’t a ton of interaction between the two actors in the first outing (with the exception of the climax), so I’m really hoping for a script that can flesh out the sibling rivalry and “family first” mantra that was ingrained into the characters. It’ll also be great to see the two actors who previously worked within the Daredevil Universe to combine their past experiences for a bigger and better sequel (Jonny B previously appeared as The Punisher).

Don’t feel sorry for Ben Affleck, he’s doing all right (even if his personal life seems to frequently get in the way of his professional endeavors). Twenty-five years later, I will continue looking forward to watching the filmmaker bring new characters to the big screen. I just hope he has better sense this time around to avoid any more Gigli disasters.