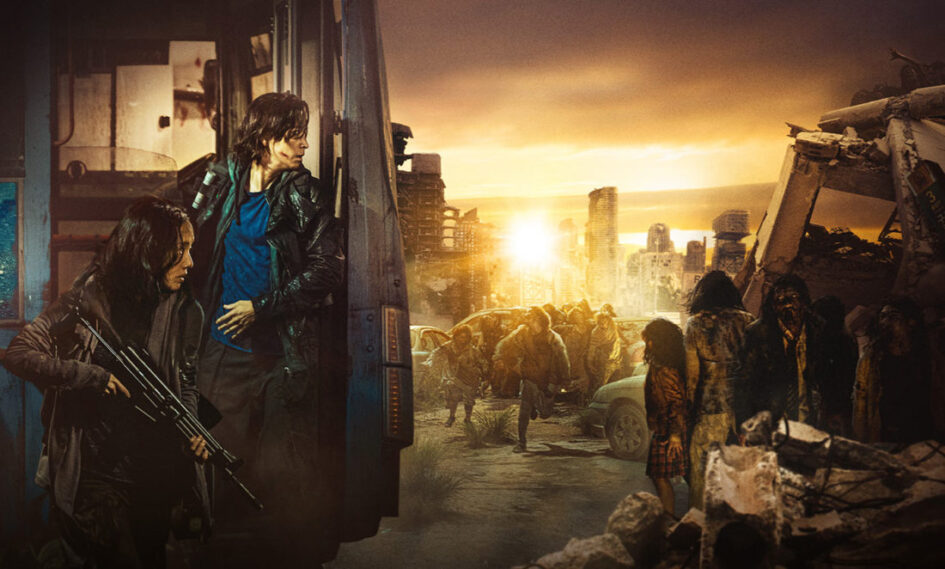 Per Matt
While U.S. movie theaters remain dark like a hiding monster, ready to strike its prey at a moment’s notice once given the all-clear signal, the overseas box office has awakened and is alive and well. And all it took for South Korea to quickly get the world’s attention was to release the sequel to a cult-classic Zombie movie that many people originally found on nationwide streaming services.

In 2016, Train to Busan was released as a post-apocalyptic thriller (Check out our Netflix Hidden Horror Gem article, a Haunt Life review). The film racked up $92 million at the global box office and has gained a cult following in the states, currently airing on Netflix and growing more popular by the day. With that much success, a franchise was born. Writer-Director Yeon Sang-ho brought an animated prequel to life (Seoul Station), while never really dealing with any of the previously established characters. He also didn’t address Patient Zero or the cause of the Zombie Apocalypse. Could these topics be ripe for the picking for the undead sequel?

Picking up four years after the original film’s conclusion, Jung-seok (played by Gang Dong-won) is a soldier who must return to Korea in order to retrieve something important, after having previously escaped the country with his life. Now he must return and hopefully survive numerous ravenous monsters a second time.

Not long ago, AMC Theatres Delayed Its Grand Re-Opening, along with other U.S. chains, while other countries, like China, prepare for an immediate re-opening this week. Very soon, Peninsula will premiere in Thailand, Denmark, Norway, Sweden and Cambodia. The film’s future looks bright, as audiences are currently desperate for a new form of entertainment and it seems they’re willing to venture out into the public in order to get it, possibly threatening their health in the process.

Train to Busan premiered at Cannes, but with the global pandemic in full effect, Peninsula did not receive the same introduction. Instead, the film had its global premiere last weekend. Yeon has mentioned his inspirations for the sequel — which has a larger budget than the original — include the Mad Max franchise, as well as Land of the Dead. Those sound like solid films for some serious world building to be based upon.

Should Peninsula prove successful (and it clearly looks like it’s trending along that path), there could very well be more stories to tell within the Train to Busan universe. Could that mean more animated movies, as well as live-action sequels? Perhaps. I only hope the time and care is taken to properly develop a decent storyline… not just another generic cash-grab.