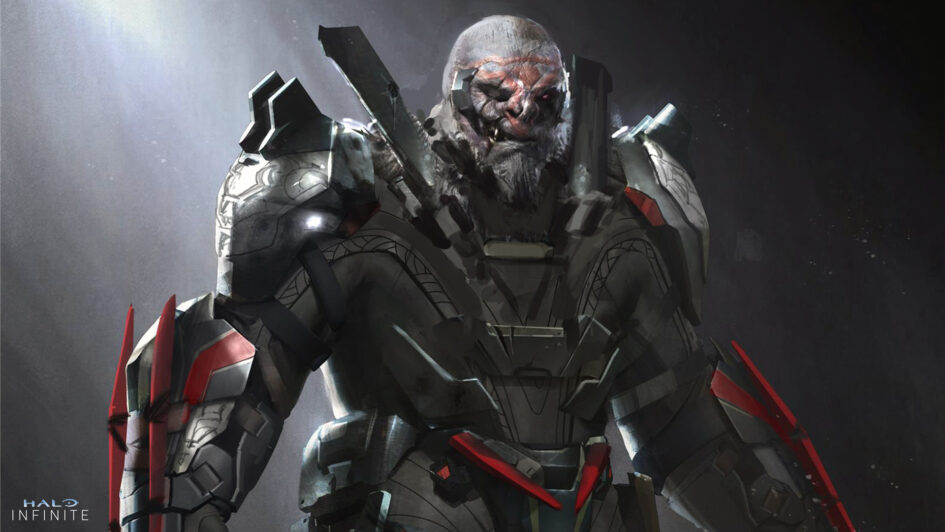 Per Matt
Halo Infinite symbolizes where next-generation video games are headed. And with that, comes all-new threats for our hero. But in order to identify where the franchise is headed, we must first take a look back at the series’ past.

Brand loyalties, much like loyalties in general, usually run deep. For some reason, you the consumer made the connection with an item, be it food, clothing, a vehicle, whatever. Whether you were taught by family members to use a certain item, you’re nostalgic or it’s just a product that might contribute to the greater good, once you discover something great, you tend to stick with it for the long run. I grew up in the South, so I’ve always preferred drinking Coca-Cola. I’ve always liked certain restaurant chains and have chosen certain brands of clothing. The same is true for my entertainment values.

Growing up a Child of the ’80s, I was determined to stick with Atari. I was lucky enough to receive the 2600 console as a birthday gift and despite its lack of graphic quality, I almost wore out my Pac-Man, Donkey Kong and Combat cartridges, among others. When something new came along to battle Atari, claiming to be the latest and greatest, I remained loyal for many years to come. Fast forward a decade and my allegiance was with Nintendo, through thick and thin (and five generations of consoles). Then Microsoft introduced itself as the new kid on the block, and after playing Halo: Combat Evolved at the Consumer Electronics Show, I was all in. The game was ground breaking, ultimately paving the path where all first-person shooters should go.

At the time, Bungie Studios paired state-of-the-art graphics with a mysterious lone wolf of a protagonist — one which always wears a helmet, preventing the player from ever seeing his face. It may seem difficult to relate to a character who largely remains unseen, but it’s easy to relate to someone who follows the rules and always helps his teammates with his last dying breath (he has survived death multiple times). John-117 became a Spartan II super soldier and through his efforts, almost singlehandedly, he has saved the fate of humanity numerous times. (The ongoing storyline is basically an altered version of the superhero genre, but with first-person-shooter elements.) No obstacle seemed to big for the Master Chief, as each game’s release seemed to substantially up the ante. Many fans of the franchise seem to think Halo 3 was the best. I really liked the storyline, especially the Zombie-like monsters created by The Flood, but I seem to prefer the smaller storyline of Halo 2.

When 343 Industries took over the franchise, the games largely went into another direction. Halo 4 began the Reclaimer Saga, followed by Halo 5: Guardians (I was either disappointed with the overall storyline, so I never actually reviewed it. Or I was sidetracked and never got around to it.). At the time, I was very proud to have acquired every achievement for all eight Halo games. Since then, many more have been released, further expanding the Halo Universe, but I’ve managed to take less interest in the newer ones, as online multiplayer has taken a greater emphasis than creating an exemplary single-person campaign. Leading up to Infinite’s release, Microsoft and XBOX Studios hyped up the audience’s anticipation with the release of Fireteam Raven and the touring video game convention, Halo: Outpost Discovery. Then there was the announcement that Infinite would return to split-screen co-op gameplay, and many fans of the original games rejoiced (including me!).

This week, gamers finally got a sneak peak at Infinite with the Discover Hope teaser trailer, which brings out a new beast for the Chief to battle.

The soundtrack’s music sounds miraculous, but the biggest takeaway is the new Big Bad. Who is Escharum? What makes him such a big threat to humanity? While I don’t read the book series, which further details the game’s mythology, a quick wiki glance explains he’s a Brute and a Banished war chief, brought to life by voice actor Darin de Paul. I’m sure if I wanted to seek out spoilers, I could, but a big part of the game’s experience, for me, is to learn about the characters as I’m playing it. I do look forward to the game’s release, which will be in about four months.

A couple of observations I’m not exactly thrilled about: The “new” Bionic Commando controls and the graphics. While the trailer was originally intended to be released last month, I’m sure the graphics were a work in progress, so an improvement is almost assured for the upcoming release. The gameplay looks impressive, but what’s the deal with Master Chief’s grappling hook/claw? Seems a bit too gimmicky, but I’ll wait to make my final decision, once I play the game.

Halo: Infinite balances between being both a current-generation and a next-generation game, as it will be released on XBOX One, Windows 10 and the upcoming XBOX Series X console. Seems like a decent way to keep current console owners satisfied, while also enticing an even greater gaming experience by purchasing the new one.

The holiday season of 2020 can’t arrive soon enough, as entertainment options seem to be rather low at the moment. If you own the PC version of the Master Chief Collection, why not replay Halo 3, which was recently added to the game. Or you could gear up for the upcoming Halo TV series by rereading a Halo novel or two. Or, if you’re like me, you can finally wrap up those last couple of tough multiplayer co-op achievements that are preventing my next completion. I’ve been loyal to the Halo brand and the XBOX console for many years now. I look forward to finding out what happens next for the character and playing the new game soon.

For more Halo Infinite info, make sure to check out the game’s webpage.