Beyond the Red Door: It Comes at Night

After seeing the teaser trailer for It Comes at Night, I had a bet going with my fiance. I thought that it would be a Zombie movie. She was leaning more toward psycho/isolationist killer. We both agreed that it would be some kind of Bill Paxton/Frailty deal, where some guy is just imagining the Zombie Apocalypse. We were so very wrong. I was not prepared for what I actually saw on that screen. I think that’s really the best way I can describe it. The trailers for It Comes at Night have been intense, but they’ve done absolutely nothing to prepare audiences for what they are about to experience. I know that I wasn’t ready for the profound emotional toll that the movie would take on me, let alone the full-on suspense and terrifying mystery that unfolded. There are spoilers ahead, so consider yourself warned.

The press release is just as mysterious, but sheds a bit more light on the film than the trailers do. Take a look:

“Imagine the end of the world — Now imagine something worse. Award-winning filmmaker Trey Edward Shults follows his incredible debut feature KRISHA with IT COMES AT NIGHT, a horror film following a man (Joel Edgerton) as he is learns that the evil stalking his family home may be only a prelude to horrors that come from within. Secure within a desolate home as an unnatural threat terrorizes the world, the tenuous domestic order he has established with his wife and son is put to the ultimate test with the arrival of a desperate young family seeking refuge. Despite the best intentions of both families, paranoia and mistrust boil over as the horrors outside creep ever-closer, awakening something hidden and monstrous within him as he learns that the protection of his family comes at the cost of his soul.”

Joel Edgerton’s character, Paul, is a very prominent lead, but the truly stand-out performance from this movie is from Kelvin Harrison Jr. (Roots, Birth of a Nation), who plays his son, Travis.

Travis is a 17-year-old boy living in an off-the-grid home deep in the wooded isolation of a mountain range. It could be the Appalachians, the Rockies or the Catskills. It could be on an island in a parallel universe, for all we know, because we never know exactly where he is for the film, other than in the woods far from civilization. The outside world has fallen apart; an unusual and highly contagious disease is killing everyone and everything it contacts. He knows it all too well after watching his grandfather, Bud, contract the disease. Imagine a late-stage cancer and the Bubonic plague having a baby that also withers the minds of its victims with no real way of knowing how it spreads or how long it takes to gestate. We know from Paul and Sarah (Travis’ parents), that society has broken down and the plague is everywhere, but they really don’t want to talk about it, which leaves the imagination to wander. The house, itself, has been boarded up and a makeshift clean room lies behind a large red door, which is the only way in or out.

When an outsider breaks in looking for help, he’s met with suspicion and doubt, but convinces the family to let him bring his wife and small child (and their farm animals) to the hidden outpost. Things go well for the two families for a while, learning to cooperate and live together, but that all changes when the small boy, Andrew, the newcomers’ son, is believed to be infected. The last fifteen minutes are gut wrenching and intense and, as the credits rolled and the lights came up, I found myself frozen.

I had just suffered a profound loss. 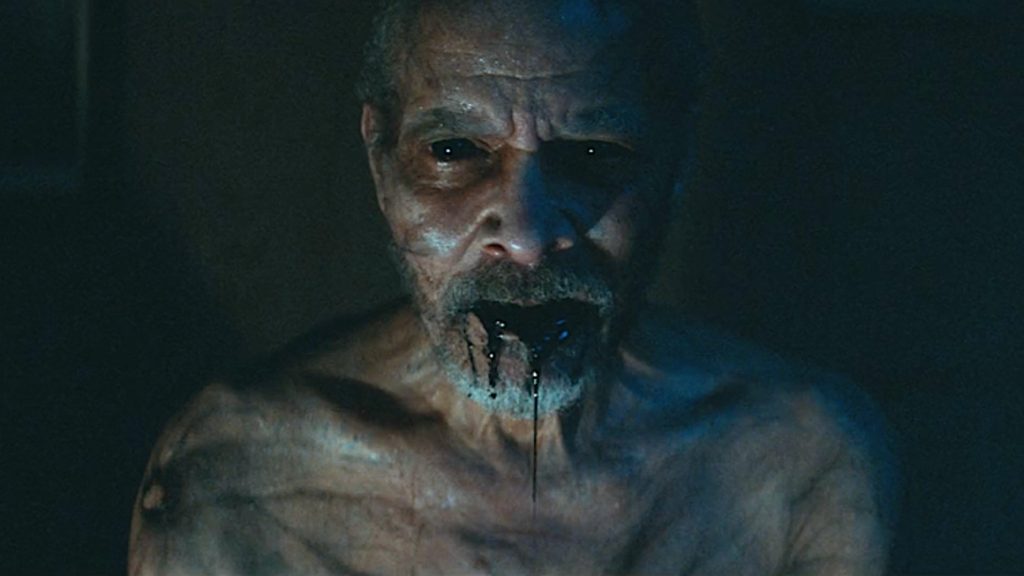 Not personally, mind you, but the characters had been so well developed, the drama and danger of their lives so ever present, that I felt a connection. Even writing this, now, has my heart beating a little faster. The tragedy of the end left me feeling completely shaken, in need of someone to talk to. It was like waking up from a truly horrific dream, that sense of disorientation and loss before the fog of sleep clears and you’re able to start functioning a bit. I needed a cigarette and a hug when it was all over.

The film is multifaceted with an interracial family, whose son is teetering on the cusp of manhood, battling his own hormones and body, as well as the intense grief and uncertainty that comes not only from that strange juxtaposition between being a child and a man, but from the terror of living on the brink of oblivion. There were moments of awkward sexual tension between Travis and Kim, the wife of the second family, that easily could have been developed into a conflict in and of itself, not to mention the struggles between Paul and Will (the patriarch of family #2), who are trying desperately to trust one another. All this as an extinction-level event has turned the world upside down.

Some of you are wondering about the monster. You’ve seen the trailers and you just have yourself convinced that there are Zombies or some plague-spreading Lovecraftian horrors lurking in those woods, feeding nocturnally on any who venture into the dark bowers of man’s domain. Sorry, kids, the only monsters are men. From bandits on the highway, to the doubts and fears boiling inside the survivors, the only terrifying creatures are human beings, who are ready to commit wanton acts of violence toward one another in order to survive. That said, the title, itself, seems misleading, unless you pay close attention to the vivid nightmares that Travis suffers. As for the disease, itself, from my understanding watching the movie, it’s nearly imperceptible until the lesions and sudden onset of starvation take hold. But there is a steady buildup of gruesome nightmares that foreshadow the coming and gradually drive the infected insane. There is a constant setup for a jump scare, as well. Each time a character begins to creep toward a point, as the music ramps up and heads for a crescendo that you know will come with blood and gore and horror, they bring you right to the brink and then stop. It’s absolutely maddening, in the most wonderful way. It’s a delightful bit of psychological terror that keeps you on edge.

The acting, the writing, the set dressing and direction are phenomenal. In the scenes where makeup special effects were used, it was beyond realistic. I’ve seen people eaten away by cancer and, as a horror writer specializing in Zombies and the Apocalypse, I’ve researched enough about Bubonic plague and other diseases to know that, if I saw the dying grandfather, Bud, shambling about covered in boils and sores, his gaze vacant of any understanding, I’d most likely think twice before approaching. What I really can’t stop thinking about is Travis, though. His portrayal of a child becoming a man in that sort of psychological and physical hell is beyond measure. It’s the sort of performance that suspends belief, that pulls you into the world of It Comes at Night and doesn’t let you go. Meanwhile, his mother, Sarah (played by Carmen Ejogo) is stunning. Between the makeup and the character, I couldn’t believe she was the same woman who I’d seen play Karine in Alien: Covenant a few weeks earlier.

This is an art-house style horror movie. Think indie film with a wide release. It’s a devoted watch and you’ve got to go in without preconception about what you’re going to experience or you’ll be disappointed. You may also want to have your shrink on speed dial.

It Comes at Night opens June 9th in theaters.