Bruce Campbell. That name alone inspires thoughts of the chainsaw-wielding, boom-stick carrying Ash Williams. Ever since the iconic Evil Dead series — including Army of Darkness — fans have held a place in their gore-loving hearts for this man. Ash may just be a character in a movie, but Bruce Campbell is a legend in the business.

He’s gone on to portray multiple beloved characters, such as Brisco County Jr., Autolycus in Xena and Hercules, and even the King himself, Elvis Presley. But Bruce has never strayed too far away from his horror roots.

Another horror star, Devon Sawa, also has a pretty spectacular resume, though not to the level of Bruce. His first “scary” film (I use that term loosely) was in the 1995 film, Casper, where he played the human form of the titular ghost. Devon also starred in the 1999 film, Idle Hands, in which his hand becomes possessed and removed from his body. While the premise sounds much like Evil Dead and what happened to Ash, Idle Hands was way more of a comedy than a legit horror film.

It wasn’t until 2000 that Devon cemented himself as a horror heartthrob when he nabbed the lead role in Final Destination, a horror film where death is around every corner. His future seemed bright in the genre, but it just did not seem to be. In fact, his next journey into terror wasn’t until 2020 with Hunter Hunter (read my review here).

During one of my streams last month (you can catch me on Twitch two nights a week), a viewer told me about a movie starring both Devon and Bruce. It immediately caught my attention. How did I miss this movie blessing? And when I was told that they were fighting against monsters that looked almost like deadites, I about blew a gasket. Devon Sawa is great, but add in a legend like Mr. Campbell, and you have the makings of one of the best horror films ever. Even the name, Black Friday, sounded dark and spooky. I was hooked even before I sought it out.

Black Friday is a horror-comedy by director Casey Tebo, starring Devon Sawa, Bruce Campbell, Ivana Baquero, Ryan Lee and Michael Jai White. The film is set mostly at a toy store during the annual Black Friday shopping event. Store manager Jonathan Wexler (Campbell) puts profits over employees as it becomes more and more apparent that there is something going on with the customers coming in.

Soon, however, Wexler and his employees Ken (Sawa), Chris (Lee), Marnie (Baquero) and Archie (White) are forced to fight an evil horde of possessed humans that are slowly morphing into an even more massive monster. 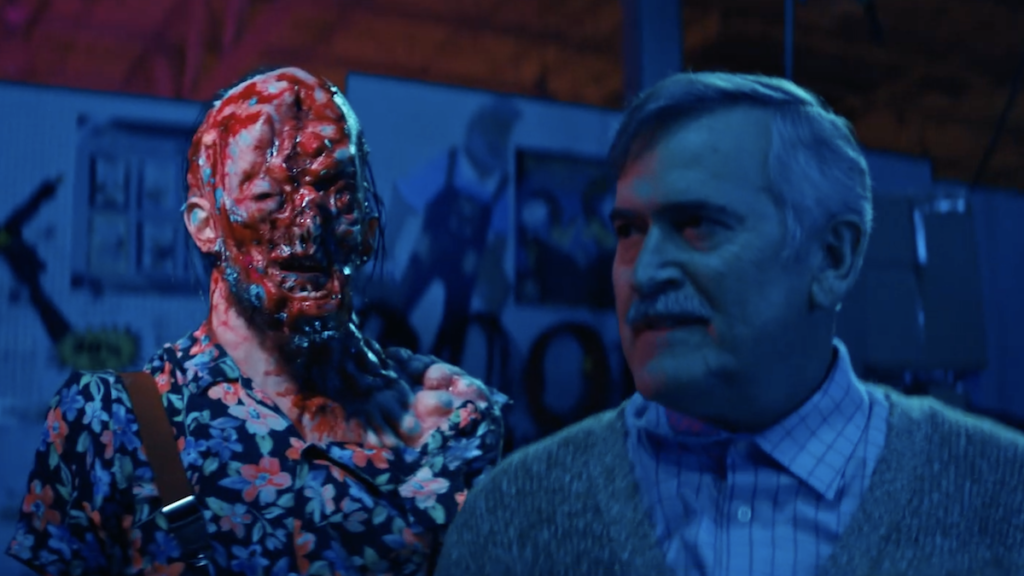 As you can see, the synopsis of this film is pretty cut forward. There really isn’t a lot of character development in it. We learn a little about Ken, a single father, who hangs out with younger people in order to feel better about himself. And we kinda get some info about Chris and his manic compulsion for cleanliness. But beyond that, the characters just felt flat. They fit into their horror movie stereotypes and didn’t show any signs of change throughout the movie. With this cast, I guess my expectation was way too high.

The monsters looked pretty good. I do have to give the special-effects department credit for borrowing some ideas from The Evil Dead. The monsters looked gruesome and fear-inducing, but still maintained their human appearance for the most part. It worked well until they introduced the giant monsters.

Honestly, I hated how these massive creatures looked. They looked fake and completely changed my thoughts on the artistic direction in Black Friday. It was an utter failure on their part, and I hope there is a budget issue or something of the sort that prevented the monsters from looking better.

Sadly, as legendary as Bruce Campbell is to the horror world, I can’t help but feel like he phoned this performance in. Black Friday probably should have been called Christmas Paycheck, cause Bruce treated it as such. His character was the only one even close to having an arc, but his acting was so lazy, he might as well have been killed off in the first part and played a Zombie or something the rest of the film. It might have been more entertaining.

Black Friday is a movie that I had extremely high expectations for, but it missed the mark. I have to give it two out of five stars. The story was predictable. The characters were boring. And the only good part (creature design) was ruined in the last 20 minutes of the runtime. This is what happens when I get my hopes up for a great horror flick.

Maybe it’s time for Bruce Campbell to just sail off into the sunset of his career. Any further performances like this, and the rest of his fans may start asking for that as well.