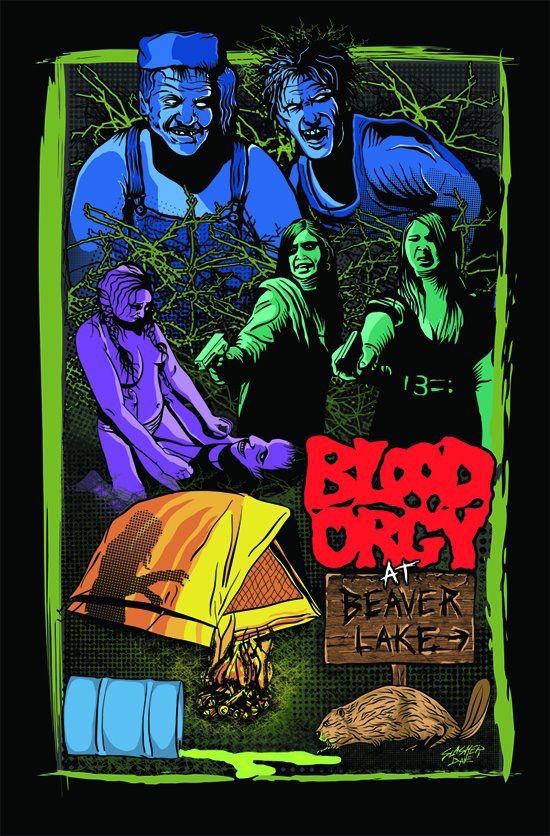 With a title like that, how can you not read this riveting post? Welcome back to another Troma film review from #hauntlife.

This week has been incredibly busy for yours truly. Being that we are at the end of August, my favorite time of the year is closing in. That’s right… HAUNT SEASON! In my new role with Nashville Nightmare Haunted Attraction, I have been working on several small projects to do my part to make this year the best year to date. From writing up a sponsorship program (feel free to email me if you want more info) all the way to working on some queue line audio. Plus, my 3-D printing business has taken on a ton of orders for cosplay products, as this is the season of the bigger conventions, like Dragon Con and NYCC. Oh, plus, I am getting married in the next two weeks! Such a great (and extremely stressful) time, here, at Kittrell Entertainment.

Blood Orgy at Beaver Lake follows the misadventures of two henchwomen for the evil Mr. Delicious. They are sent to to check in with a scientist who is working on a new drug called Sextacy 69 that is a combination of cocaine, ecstasy and Viagra. The doctor won’t come off the drug, due to its side effects, and thus is forced to be the first human test subject. As the drug takes effect, he transforms into a sex-crazed Zombie, and turns his “deadly affection” to his assistant. Upon viewing all of this sexual horror, the two thugs empty their guns into both sodomites.

Understanding what could happen if this drug reaches the streets, the girls decide to take the barrel of Sextacy 69 to a remote camp called Beaver Lake. Along the way, the barrel is lost and falls into the hands of a couple of redneck hillbillies. Deciding they had nothing better to do than get messed up, the two take hits off the drug. It isn’t long before they, too, become sexual monsters. When they come across a group of young hippies, their sexual frustrations are unleashed in gory greatness.

Normally, I am not critical of films like this. But while I appreciate some brainless fun, I have to say a few things that just did not work for me, here. First, when the doctor took the drug, he became a deformed Zombie, complete with exaggerated brow. But when the hillbillies took it, the only thing that changed was their voice. It would have worked better had their been some consistency in this piece. Second, the special effects, both practical and digital, just were bad. If you are going to do both, at least one has to be decent. I would expect the practical effects to be on point. But that, sadly, was not the case here. And finally, the acting was just not good at all. I know I am not signing up to watch an Oscar-worthy performance, but the characters just were not memorable. There was no clear hero to cheer for. There was no true villain behind everything. Even Mr. Delicious, who I thought would end up being the main antagonist in the film, only had a three-minute cameo. I felt like quality was just lost.

I have to give this film a 2 out of 5. If you are going to do a Zombie flick, it should at least have… I don’t know… more than one Zombie. The story started out strong, but then became muddled and seemed to have lost itself at some point. The effects were not good, even by Troma standards. And the actors needed to do a little better at trying to get over.