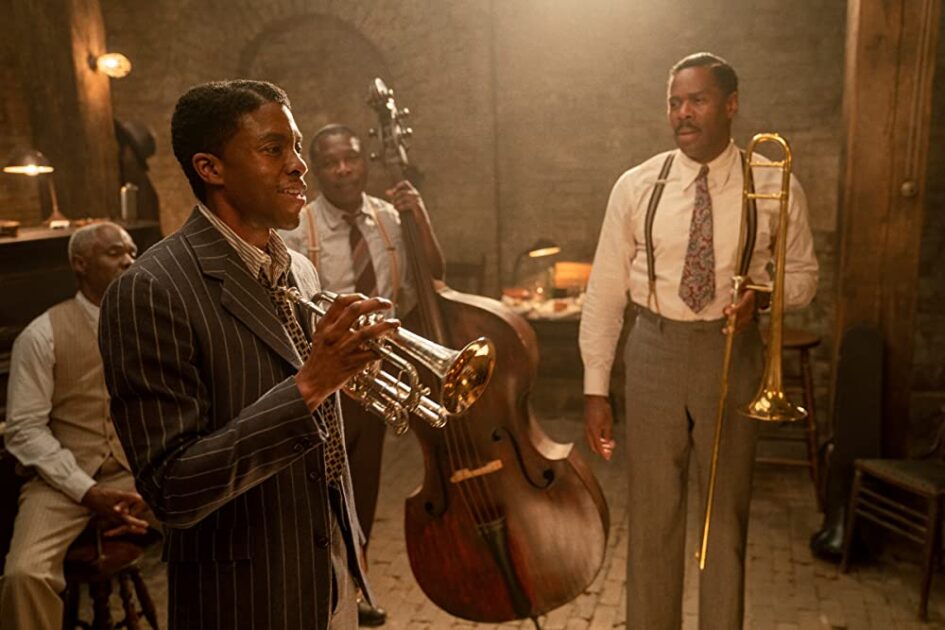 Per Matt
There’s a saying that you can’t really sing the blues until you have actually experienced the blues. All of the pain, the anguish, the suffering will then flow right into your music. And yet, there’s happiness in there, somewhere, as well. Singing the blues is a way to understand life, through all its ups and downs. All of this, and more, is celebrated in Ma Rainey’s Black Bottom.

The entirety of this Netflix film takes place during a Chicago recording session by the Mother of the Blues, Ma Rainey, and her band. Its major focus takes place away from the band’s performance, as the characters get philosophical and deep, while waiting to play. Race, power, the existence of God, complications and continuous hardships are addressed within a claustrophobic setting. That’s to be expected per playwright August Wilson’s source material, whose series of 10 plays depicted Black life in America throughout different decades, earning him the Pulitzer Prize for Drama twice and two Tony Awards for Best Play. Denzel Washington (Executive Producer), George C. Wolfe (Director), Ruben Santiago-Hudson (Screenwriter) and Branford Marsalis (Music Director) team up to adapt this story… that’s a whole lot of award winners working together to create one great movie!

Academy Award-winning actress Viola Davis will receive much of this film’s publicity, as she triumphantly returns to a second Wilson story, after winning her previous Oscar from the author’s first big-screen adaptation, Fences. Black Bottom is set during 1927, where Gertrude “Ma” Rainey is a highly acclaimed blues singer, known for her rousing performances in the South. She’s also quite the diva, as she doesn’t take no for an answer by her white manager and producer, or her bandmates. She’s always in control, which absolutely rubs Levee Green raw.

Young, vain, impatient and irrational, Levee envisions a bigger picture than performing jug-band blues. Chasing the spotlight of fame, he’s got good intentions, while being haunted by the demons of his past. This complicated character is expertly dissected by one Chadwick Boseman, venturing very far from King T’Challa’s realm. Disappointments come naturally for Levee, who uses his talent to survive, overcoming his emotional scars. The character’s backstory mirrors an alternate version of Louis Armstrong, but one who never receives the opportunity to record his musc, eventually becoming a tragic hero.

Although centered around an actual singer and her band, Ma Rainey’s Black Bottom isn’t a biopic. It’s mostly based on a play, which is based on real life, if that makes any sense. The real Mother of Jazz paired rural blues songs with a jazz band ensemble, whose protegee, Bessie Smith, became her rival. This story switches gears a few times, incorporating multiple antagonists into the script, with Boseman and Davis alternating roles. The acting is terrific, along with the writing, which extends into soliloquy-like performances at times.

Just as his character tries to snatch the attention away from his bandleader, Boseman should earn some acting awards for his final on-screen role, which is incredibly gripping. The Music City Film Critics’ Association already posthumously awarded him Best Actor for 2020 and I bet there will be many more awards forthcoming. Sometimes it takes an untimely death for someone to ultimately receive recognition (sadly, much like Heath Ledger, among others). Boseman’s dedication during the end credits is touching.

The acting is phenomenal here, not just isolated among the two leads. Michael Potts and Glynn Turman are terrific, but Coleman Domingo deserves a lot of praise, as well. The multi-hyphante filmmaker has ventured from small productions to Fear the Walking Dead and now film adaptations of well-known plays, portraying the rock for both Davis and Boseman in the picture. Music City Film Critics also awarded Black Bottom the Best Acting Ensemble of 2020.

It’s so sad to learn that all of Boseman’s on-screen performances since 2016 took place between surgeries and chemotherapies that complicated his Stage 3 colon cancer. His performance here is definitely a highlight, along with the terrific music. I absolutely recommend giving Ma Rainey’s Black Bottom a shot.