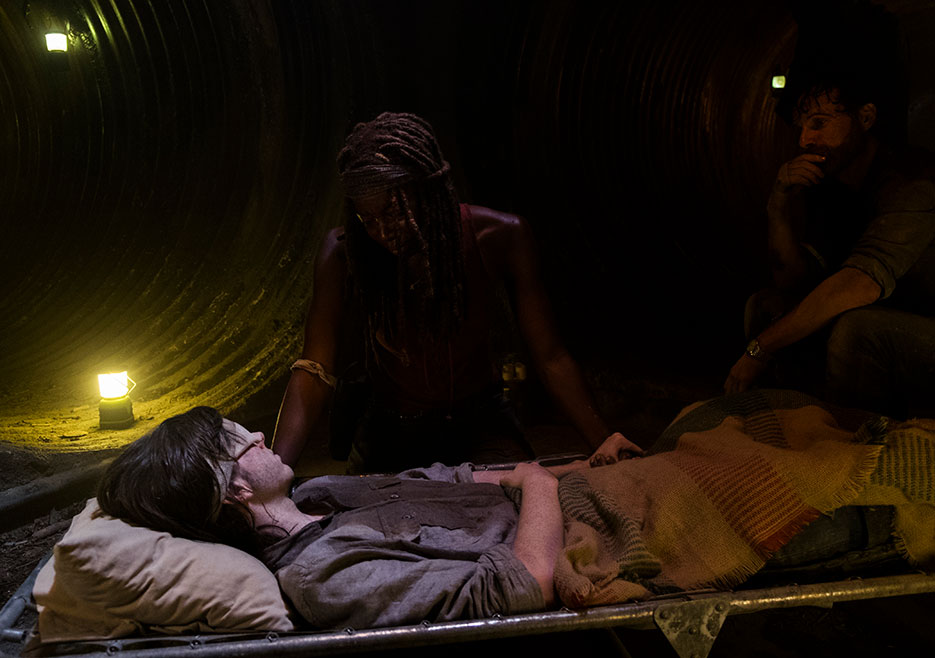 Simple enough. Says what happened. Doesn’t explain why the main character was killed off The Walking Dead, though.

In the Mid Season Premiere, “Honor,” Carl spends some time reflecting, saying good-bye to friends and family and generally spending a lot of time not dying. This very special episode included flashbacks, odd flash forwards (or are they just Old Man Rick daydreams?) and a whole lotta tears shed on screen.

It’s odd how the rules of AMC’s Walking Dead Universe don’t apply to everyone equally. For minor characters (and a few major ones), their deaths came quickly. But for the main players, they get much more time to die. And what did this episode accomplish? Well, it mostly felt like a hopeful Emmy nomination for young Chandler Riggs, as he departs the TV show for a possible musical career.

How does this development affect Rick? Will Carl’s death foreshadow revenge or even the death of Negan? This season (and parts of last) has shown new strides for the character as a leader, but unfortunately, it’s too little too late.

Growing up is painful when it’s happening on the small screen. Carl, the character, has been annoying at times, briefly learning about love, showing mercy by killing his mother… and never seemingly got a haircut. Seriously, the kid’s hair helmet was getting a bit ridiculously long.

He seemingly hated and loved his father, all at once. Broke many of Rick’s rules. Shot Shane. Threatened Negan. Got shot twice. Ate a lot of pudding. And lost an eye.

Carl’s death is clearly a departure from the comics, but his memory will live on through the people he touched. It also reinforces a theory of mine: There can only be one child/teenager on TWD at a time. Somehow, one way or another, they all seem to get killed off, one by one. Until there is only one. What does that mean for Enid, Judith and Maggie’s unborn child? It means I wouldn’t bet a lot of money all of these characters will survive the Zombie Apocalypse anytime soon.

As for the rest of the episode? The Kingdom gets cleaned of Saviors, the rest of Rick’s Gang is off to Hilltop and a young killer is born (as trained by Morgan and Carol). Oddly enough, there weren’t a whole lot of good-byes, but Daryl does promise to get Baby Judith to Hilltop safely. Obviously, this episode was meant to set up the remainder of the season, but I couldn’t help to think the whole thing was dragging along. Not much happens. And it continues for 40-something minutes. Can’t say this was one of my favorite episodes, ever, but it was definitely one that will be remembered as Carl’s last episode.

The beginning of Season 8 was filled with nonstop action. Now that the show has returned, it feels like Nicotero and crew are deliberately working on a gradual crescendo of craziness to close out the season. I guess we’ll have to wait and see what will happen next.