Walker World Celebrates the Art of the Undead Actor 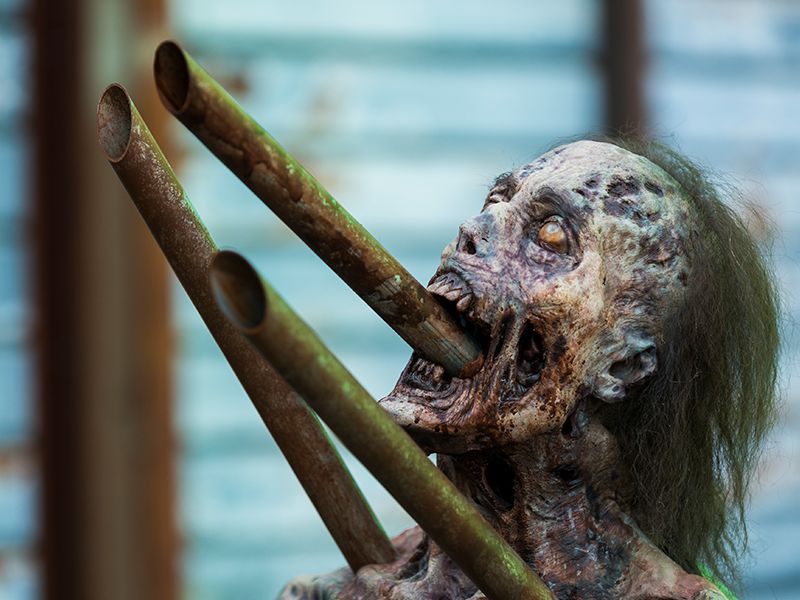 When you think about AMC’s The Walking Dead, the hit show’s artistic team of behind-the-scenes filmmakers may not be the first thing to come to mind, but it should be.

They’re decaying. They’re disgusting. They’re constantly causing nightmares (for the cast, the audience and the special-effects crew), and they generally receive a ton of on-screen abuse (without getting much praise). The primetime walkers and stalkers from TWD have become pop-culture celebrities on the convention circuit, sometimes getting more recognition than the featured actors who share some of the same scenes at different events, but without Greg Nicotero and his KNB EFX Group, the show would never have gained its claim to fame in the entertainment world. Sure, Robert Kirkman, Andrew Lincoln and Norman Reedus may hog the headlines, but without the professional actors who are the equivalent of creature suit actors — although not necessarily thought of in the same way — the show would have never come alive, reaching through your television screen.

Often referred as “extras” outside the industry, the more favorable term is to call them “background actors,” because these people aren’t just slabs of undead meat. They’re method actors in costume, even if they never get to utter a spoken word. Many memorable scenes from the graphic novels have been recreated with them and quite a few of the main characters have been killed off dramatically with their bites, including Amy, Sophia, Dale, T-Dog, Andrea, Bob, Noah, Deanna, Shiva and most recently Carl, who will shine in the spotlight on tonight’s Mid Season Premiere, “Honor.” There have been many more characters who have reanimated after getting injured by humans, but that’s not the focus, here. It’s the gruesome special effects, the artists who “bring to life” the undead and the actors who bring the fear.

The horror genre was brought back to life on the small screen eight years ago, in a sense, with basic cable’s biggest TV show, encouraging the creation of others, including Ash vs. Evil Dead and Stan Against Evil, and these hard-working actors should be getting more credit. Because without them, Rick’s Gang would be running around, only fighting other humans (Kinda sounds familiar to the All Out War storyline, right?).

The Zombies are definitely defining what the state of the world is in TWD, and each actor portraying the different states of decomposition help creates that storyline. As each season progresses on the TV show, the walkers have become more shriveled up, while falling apart, losing appendages. And with each new featured creature, the audience needs to believe the cast is in danger. The program’s casting directors and special-effects people help give each background actor that special touch of terror.

Throughout the years, we have interviewed different featured walkers from the show, so the next time you see one of these actors, make sure you thank him or her for paying attention to all of the gory details, and for nailing their characters. They’re literally killing it.

To find out more, watch the documentary, Walker World, which is currently featured on AMC’s webpage.