Charlie Manx Finally Gets a Backstory in NOS4A2 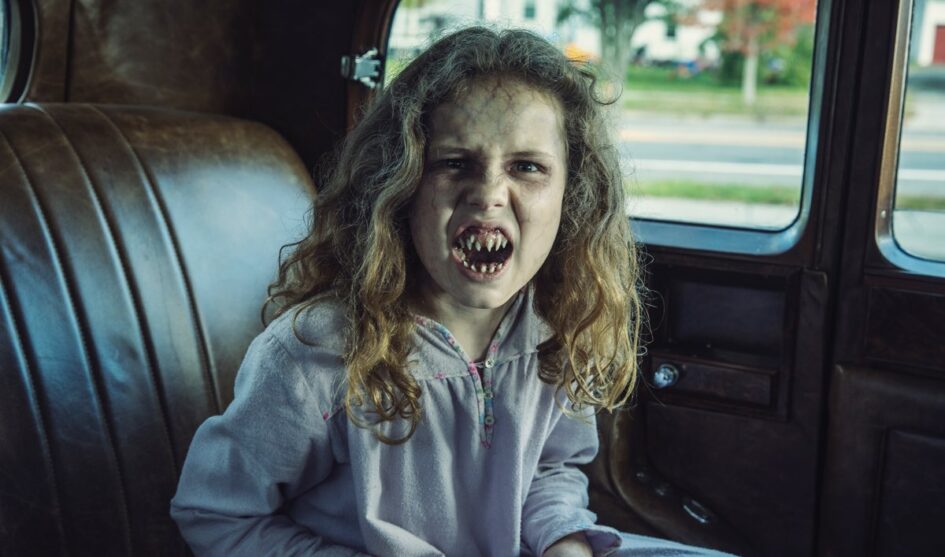 Per Matt
Sometimes, when you’re a soul-eating vampire, you’re bound to lose your way. Whenever you’re not kidnapping children and whisking them off to the magical Christmasland, a place which exists solely within the mind of Charlie Manx, you might make a misstep or two. So, if you’re an immortal who somehow gets killed when your possessed 1938 Rolls-Royce Wraith gets burned to a crisp, you’ve got a lot of pressure on your shoulders to reanimate and feed your starving children. And this is where Season 2 begins for NOS4A2.

The season premiere “Bad Mother,” finally gives an extended peek into Christmasland. The power’s failing and crossing over is possible for kids, before they disappear forever. Living in Gunbarrel, Colorado with Lou and her kid, Vic McQueen learns that Charlie Manx died after being in a coma. Except that Vic knows he isn’t dead, because she’s supposed to kill him. She turns to alcohol addiction and then learns that her knife (aka the magical motorcycle) somehow made its way across the country, back to her. Meanwhile, Bing reassembles the Wraith and Charlie Manx, the serial killer, has returned. Except Vic can’t put her newly formed family in that kind of danger, as her gift is tearing her apart and she can’t be reassembled. So, she bails…

The season’s second episode, “Good Father,” takes a dramatic U-turn. Instead of focusing on where the antagonist is going, the show finally gives the bad guy a backstory. Charlie Manx is definitely complicated… so complicated he received an entire episode to explain it all. It was good to learn a little more about the big bad of the show. At one point, he was in love, married and had a child. Then the Wraith entered his life and it all fell apart soon thereafter.

One way or another, the car and the driver are bonded. This part isn’t explained. Neither is the way it magically repaired itself and started once a young child enters it. But what is shown is the love Manx has for his daughter, Millie. Was it really surprising that he sacrificed his daughter’s soul, who devoured his wife? Not really. But it was interesting to learn that Christmasland was conjured up from Charlie’s imagination. That doesn’t explain where it is physically located or how he has this unusual power, but perhaps that is something that will eventually be addressed in the future. And it was REALLY great to have an entire episode without Vic McQueen. That will probably never happen again, as she’s the lead character, but this episode was my favorite one, so far.

“Man thinks he can live off me like a vampire…”

It’s possible that Charlie’s arc revolves around losing his family way too soon. Hopefully, little, evil Millie will turn the tables on her father and grow as a character. We’ll have to wait and see for these possibilities.

Since the series premiere (Psychics and Vampires: What Just Happened?) aired, I’ve been trying so hard to enjoy this adaptation of Joe Hill’s novel, but I do lose interest at different points along the way. There’s a couple of characters I really like in this series: Maggie the purple-haired psychic and the immortal Charlie Manx. So far, only one of these characters has received the spotlight (but it took two seasons for it to come to fruition) and the other has been sidelined, regulated to the background instead of actively participating in the story. Now, that’s not good.

And how’s Bruce Wayne McQueen for a name? Obviously, Hill is a fan of comic books.

In order to fully prepare for Season 2, make sure to check out the Ghost webisode, which gives a quick backstory on the creepy car, as well as check out our conclusion of Season 1 (Adapting a Supernatural Horror Story, the NOS4A2 Way). When he’s not In Search Of… something unusual or appearing as Spock, Zachary Quinto does a decent job working as an immortal bad guy… even though he is a soul-sucker.