Vampires Receive a Temporary Stay of Execution in Shadows’ Finale 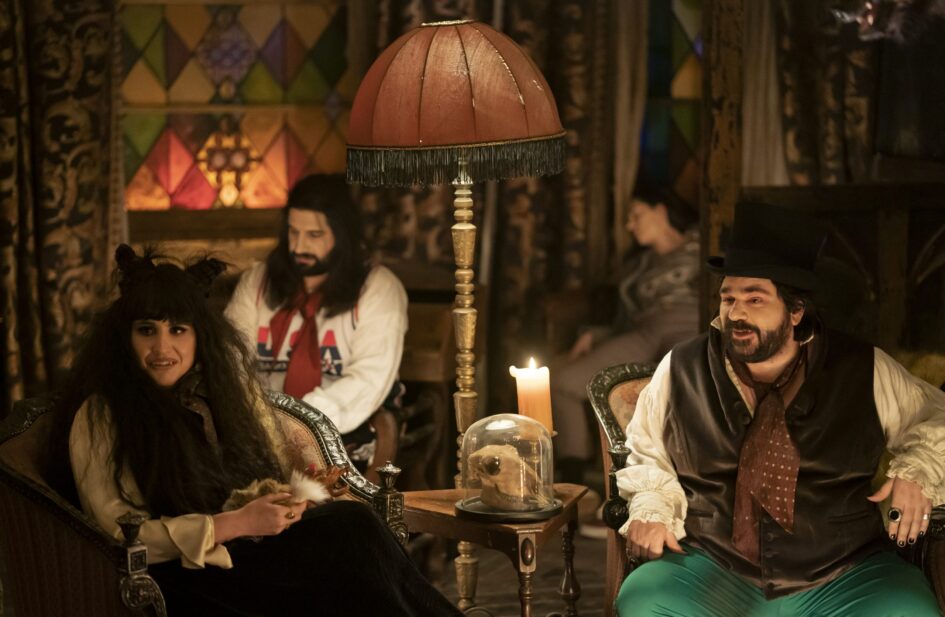 Per Matt
There’s certain rules that need to be followed when creating a horror-comedy series about a trio of vampires who live in Staten Island, New York. They can’t survive being caught in sunlight, or they’ll die. They can transform into bats. They don’t sparkle. And they must be invited into a building before entering. One of the ongoing jokes is that at their age — hundreds of years old — they’re terribly out of place in this modern-day world. The fish-out-of-water scenario continues to create a seemingly never-ending variety of jokes per episode.

Filmmakers Taika Waititi and Jemaine Clement were onto something really special with their release of What We Do in the Shadows back in 2014, although its box-office totals seem to prove otherwise. But it was the small-screen adaptation of their film that cranked out the ridiculousness, ramped up the laughs and inevitably crafted a better product for the FX Network, while molding an already-existing world. They should be equally praised for their creativity, as well as their bravery for breaking many of those same rules. It should come as no surprise that the show’s second season was the best one, so far.

Shadows’ dysfunctional vampires of Season 2 still take advantage of their human familiar. Guillermo’s basically their butler, maid, driver, protector, errand boy, delivery boy and anything else that’s needed, all wrapped into one assistant. He performs all of those duties and more with only the promise of being turned into a vampire one day… and after 10 years, he’s about fed up with it all. So, it’s not even surprising that he’s bailed on his teachers not once, but twice this season. And if things don’t change quickly, the next time will be the last.

By the end of Season 1 (Guillermo’s Family Tree Casts Dark Shadows), Guillermo learned his family tree sprouted from Abraham Van Helsing, the vaunted vampire hunter, creating a potential kink in his immortality plans. He struggled to hide his family secret in the season premiere (Shadows Unveils Even More Dark Secrets for Season 2), but he dealt with the situation as best he could.

Summing up the season, Zombies and Necromancers were introduced. A haunted story involving a ghost horse and possessed doll was followed by the trio confusing the Super Bowl party with meeting the actual Superb Owl. The main characters learned about cursed spam, with great power comes great energy vampires, a former familiar returns almost as quickly as he disappears, hilarious musical performances are counterbalanced with witches seeking the semen of immortals. Jim the Vampire vs. Simon the Devious prove to be strong adversaries and the Vampiric Council finally makes a grand return, with plans of executing our heroes a real possibility.

Craig Robinson’s Claude, as the leader of the Mosquito Collectors of the Tri-State Area, was a genius idea, and Black Peter, the witch’s familiar who’s also a talking goat, was a great throwback reference to The Witch. There was no Baron Afanas this year as the Big Bad, but Jim the Vampire proved a worthy adversary (Mark Hamill Visits the Dark Side of Shadows). Colin Robinson’s promotion may have been the best overall episode of the season, but Hamill entering the ‘verse was forceful, to say the least. Taika didn’t have a lot of time to direct many episodes this season, as he was furiously working on Jojo Rabbit (and subsequently stumping during the awards season, eventually winning an Oscar for the film), as well as keeping busy with voice acting (in the latest season of Rick and Morty). Jemaine made a grand entrance in the season finale, reprising his big-screen role (this time without Taika) after Embracing the Final Chapter of Legion, but the episode couldn’t top the pop-culture power of last year’s All-Star Vampire Episode.

Season 1 introduced us to a group of hilarious werewolf rivals, but where did they go? They never returned, although the second season did introduce us to a coven of witches, which was a pretty good extension of the show’s overall canon. I do want to see more of Benedict Wong’s Necromancer, and soon!

The very good news for fans of this show is that FX has renewed it for a third season, so there’s that. Maybe there will be time to work in an appearance by Beanie Feldstein’s disappearing teenage vamp next year, as she was also missing in Season 2. Hopefully, everyone involved will be able to figure out a production schedule that will bring more of the dark humor to the series, which is its best element.

Let’s just hope Waititi can make a bigger contribution, but the recent announcement may prove difficult for his future Shadows plans (Taika Takes a Turn Visiting the Star Wars Universe)…