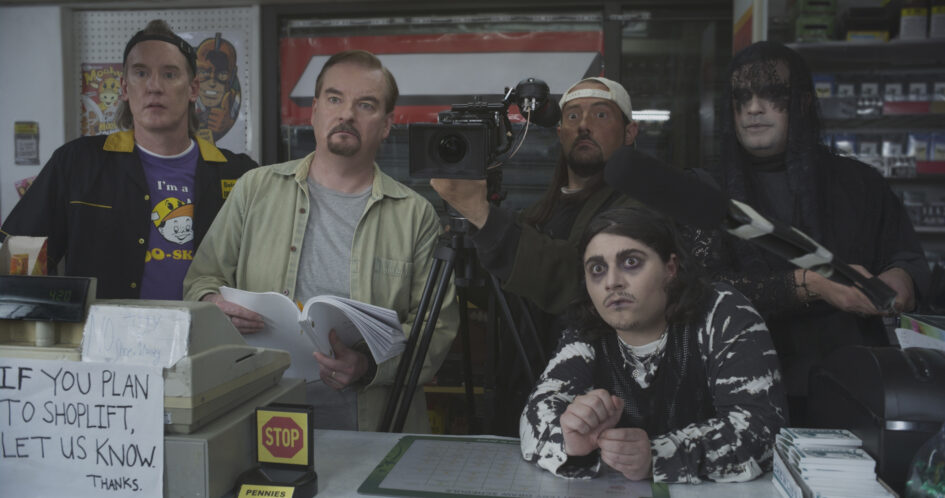 Per Matt
Snoochie Boochies! The View Askewniverse is back, and this time, they wanna make a movie…

In order to fully review Kevin Smith’s latest, Clerks III, I’ve got to explain my backstory with his films.

The first time I happened to watch Clerks was at a dollar theater near Knoxville’s East Towne Mall. I remember it vividly, as I’d moved out of the house to go to college and my eyes were opened at the quality of low-budget filmmaking on display. I was already a cinema aficionado, but this one was very different. As I proceeded to break down everything personally witnessed with my dorm friends on the ride back to campus, I became an immediate fan of Kevin Smith.

Back in the day, it felt like the filmmaker was on a roll. And he was, originally releasing 11 movies within a 10-year span, not to mention the animated Clerks spinoff. Smith almost always has the collective pop-culture pulse of a generation wrapped around his little finger, which is then packed into his tightly written scripts. The way his characters blast a barrage of oneliners and commentary never gets old, as the laughs hit hard and fast — well, maybe not with Jersey Girl.

And then Kevin Smith kinda disappeared.

Sure, he owns a successful comic book store (Jay and Silent Bob’s Secret Stash) and created a reality TV show based on it (Comic Book Men), to go along with his successful Smodcast podcasts and superhero comics scripts (Marvel’s Daredevil and Spider-Man stories; DC’s Batman, The Brave and the Bold and Green Arrow, and Dynamite’s Green Hornet), but his recent big-screen tales haven’t been super successful.

And now that the Quick Stop Groceries crew is back, Smith doesn’t miss a beat.

Best friends Randal (played by Jeff Anderson) and Dante (Brian O’Halloran) are still griping about their lives and still loving Star Wars, but now, they own the convenience store. One day, after suffering (and surviving) a massive heart attack, Randal decides to film a movie, based entirely within the store, filled with all the shenanigans from these character’s lives, because he’s “fully fluent in the language of cinema.” Its title? IN Convenience! Get it?

“It’s either a Lord of the Rings thing or a Jesus thing.”

Naturally, Jay (Jason Mewes) and Silent Bob (Kevin Smith) are brought in as DPs — heh, heh. And a bunch of familiar faces audition for roles, which are some of the funniest moments within the whole film. I don’t wanna give much more of the movie away, but just know that Smith’s always wanted to have his Empire Strikes Back moment with the series… and he finally received it. You’ve been warned!

“When I’m at my lowest, I always pray to Crom…” 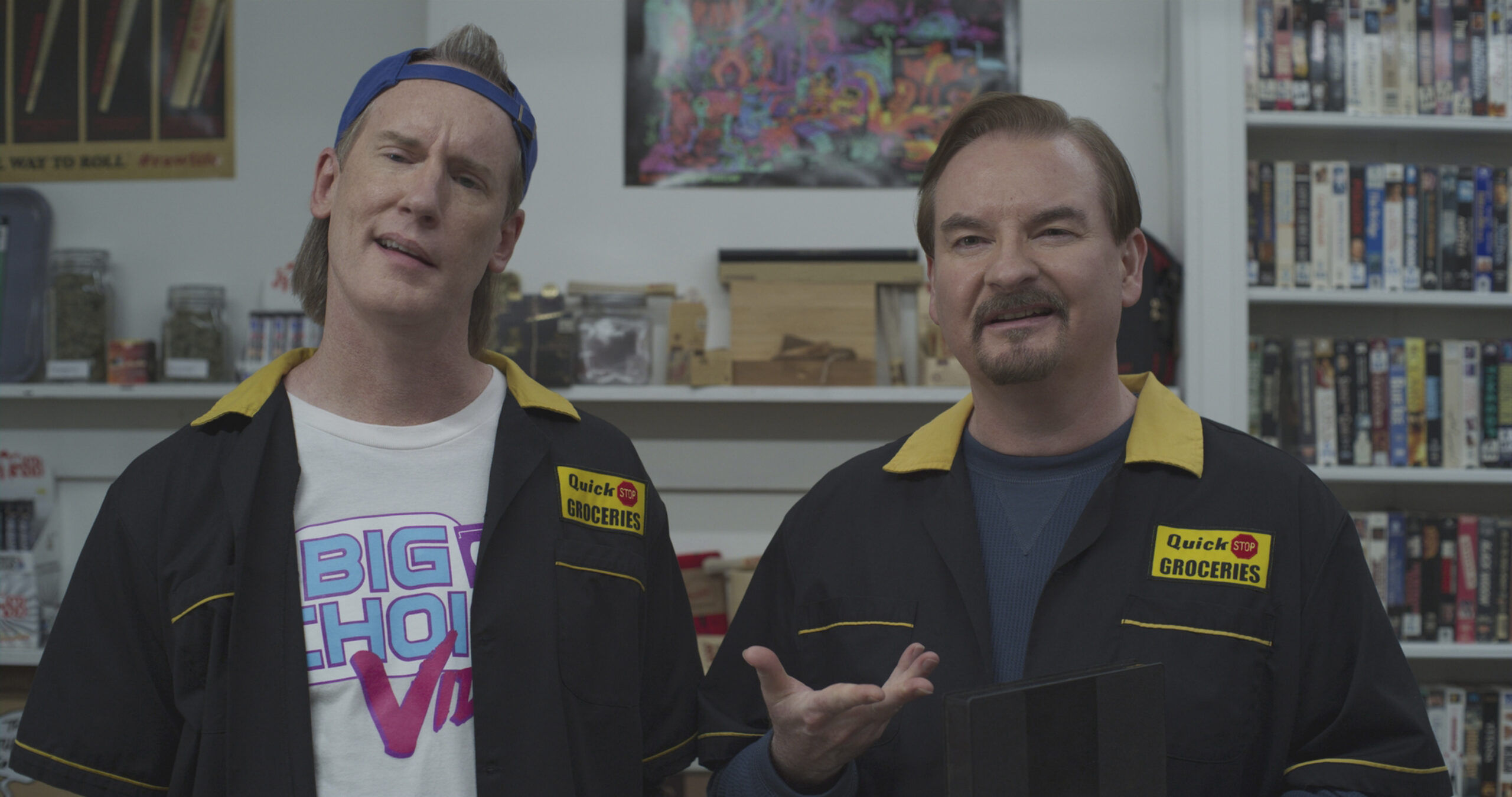 I guess I’ve been a bad fanboy and didn’t even realize it, having missed the past few VA films that have come and gone. In fact, 1994 was so long ago, I spent a considerable amount of time recapping the franchise’s wikis before watching this one. Keep in mind that VA films are specifically intended for fans. While there’s many references to past events and fan service here, there’s enough oneliners to keep the franchise newbies occupied.

Smith’s an unconventional filmmaker making an unconventional film and he has successfully created an entire franchise of cult classics. I’m thankful many of the original characters return here, even if only for quick cameos. Clerks III offers a somewhat sentimental side to these superficial characters who we’ve come to know and love after all these years. Each of the Clerks films is goofy in different ways and all of them make me laugh out loud, so many times.

“I saw the whole movie of my life flash before my eyes. And you know what? It sucked.”

One of the best parts of the View Askewniverse is laughing at the meta jokes with fellow fans. Clerks III will be distributed exclusively in partnership with Lionsgate and Fathom Events in movie theaters starting September 13th through September 18th. Originally intended to be a two-day premiere, due to heightened demand the dates have been extended.

Don’t miss this limited opportunity to see the film with like-minded fans in 700 movie theaters nationwide!

All showings begin at 7:00 pm local time and will include an exclusive behind-the-scenes look with Kevin Smith and the cast of the film. More info can be found at: Clerks III webpage. Tickets can be purchased online at www.FathomEvents.com or at participating theater box offices.

Even if you don’t get the Death Star reference, there’s a great chance that you’ll enjoy Clerks III. See it while you can in theaters. It’s a great experience!