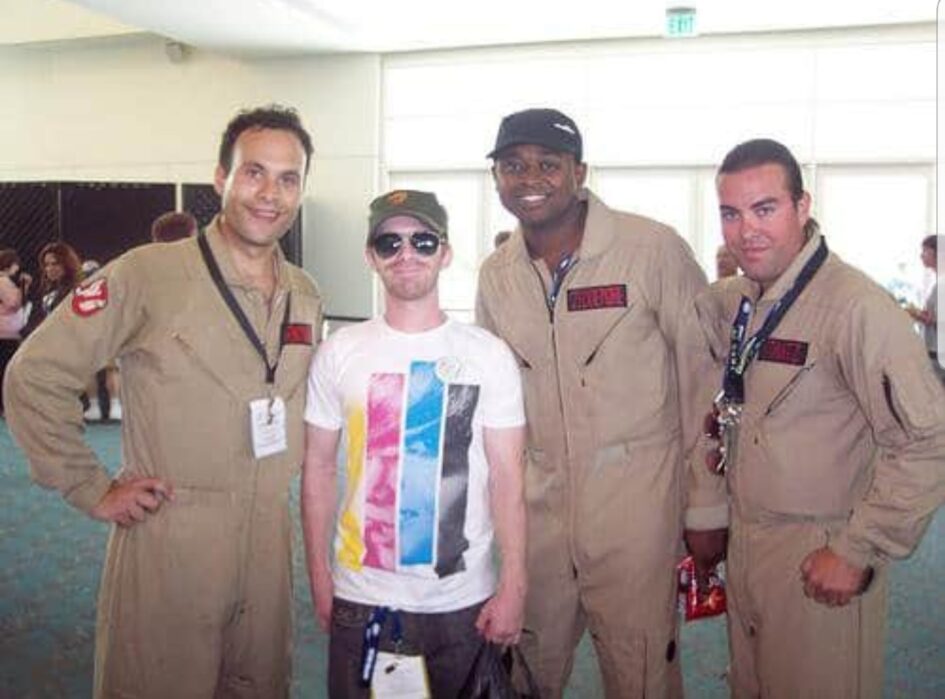 Who ya gonna call? Way back in 2016, while working a promotional job at the official Ghostbusters video game booth at San Diego Comic-Con, Matt (far left) and friends ran into Seth Green. Thanks for the pic, Seth!

Per Matt
Saturday morning cartoons. Just the simple concept of three network television channels airing four or five straight hours of animated TV shows (sometimes longer!) every weekend can be an alien concept for millennials to comprehend. Back in the day, there weren’t hundreds of specialized channels streaming a variety of genres, cranking out content 24-7. While syndicated cartoons did air on weekday afternoons, Saturday mornings were animation gold mines for Children of the ’80s.

In terms of genre animation, a lot has changed in 31 years, let alone the past couple of months. A pandemic will have that kind of affect on you. Sure, I get incredibly nostalgic whenever I look back at my formative years and my favorite decade, but I’m not the only one. Robot Chicken creators Seth Green and Matthew Senreich also seem to share their affinity toward the greatest decade. Their love for action figures, superheroes, cartoons, comic books, video games and just about every sort of pop-culture reference within the entertainment zeitgeist is clearly apparent. And it’s also the main reason why I’m hooked on watching the show.

Airing on Cartoon Network’s Adult Swim programming block that’s aimed toward an older demographic, Robot Chicken airs around 20 episodes per season and no one is safe when it comes to its satire. With stop-motion animated segments that can last only a few seconds, the show definitely requires your full attention or else you’ll totally miss the fast-paced jokes.

In the beginning, my favorite characters to appear were staples of my formative years: The Transformers, GI Joe and He-Man and the Masters of the Universe. Slowly but surely, celebrities were eventually targeted and those skits were absolutely the bee’s knees. Some were even voiced by the actors, themselves. As the years went on, the show evolved to include original characters, such as Composite Santa, Little Drummer Boy, Humping Robot, The Mad Scientist, The Nerd and Bitch Pudding (probably the best of them all). Pudding is an over-the-top, controversial “bad guy” character molded as if originating in the Strawberry Shortcake Universe. She’s hilarious in all of her outrageousness, which is probably why she’s so popular.

Often overshadowed by Rick and Morty‘s popularity within the Adult Swim brand, Robot Chicken has carved out a niche subgenre that others cannot easily replicate. It’s a nostalgic throwback to retro and modern-day topics that Generation X will enjoy the most. It’s also a show that I have taken for granted from time to time, much like The Simpsons. Because it airs practically every night of the week, I don’t go out of my way to record it, since I tune in every night before falling asleep. I do enjoy the show. I’ve especially enjoyed the Star Wars specials, as well as The Walking Dead and DC Comics shows and all of the holiday hits.

It’s a great milestone for the show to reach 200 episodes within 10 seasons. I hope it reaches many more. And if history has taught us anything, it’s that the perfect joke is La La Land.