Cosplayer of the Month: Soni Aralynn

Soni Aralynn is our Cosplayer of the Month. At the Lexington Comic & Toy Convention, Soni displayed her love for the Power Rangers, gave her approval for plot-oriented anime and showed appreciation for comic-book-based movies.

How did you get started with cosplay?
– “I went to a convention in 2003, it was Otakon. My friend let me borrow a costume, it was from a Korean MMO called War of Genesis. The character’s name was Beramode. I was pretty much thrown into the situation. It was amazing. People knew who I was cosplaying, which shocked me, because it’s a Korean videogame. Everybody was dressed as their favorite character. Everybody was being nice to each other. It was like a little family. Back then, being a geek wasn’t so cool. Being able to go somewhere where no one is judging you, it was perfect. I was hooked right away.”

What was your very first costume?
– “I think it was Saiyaman, from Dragonball Z. I made Saiyaman for school, for Halloween. I rolled up in there with the bandana, with the glasses and I had the poses down… and no one got it but my anime friends.”

How many costumes have you created since then?
– “Oh, my gosh. I’ve never counted and I really need to. Maybe about 50 costumes, but I don’t own them all, anymore. Some of them got lost in transit. It’s been over 10 years and I just lose them. I don’t know where they go, sometimes (laughs).” 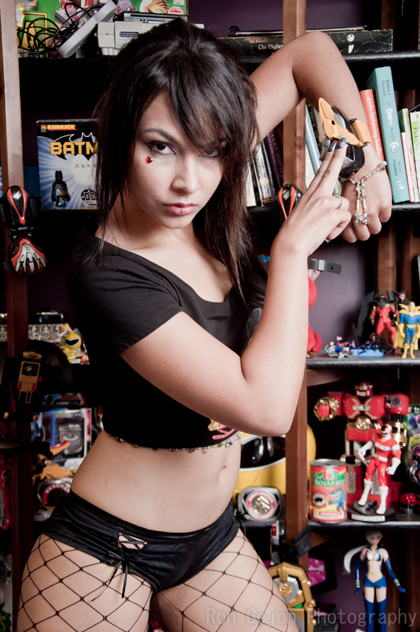 Where are you based?
– “Philadelphia.”

What are some of the costumes you’re most recognized for?
– “It depends; different people like different things. Back then, it was Jade from Mortal Kombat. The Green Ranger, now. Definitely.”

Are you noticing a rise in popularity of the Power Rangers?
– “Oh, my gosh. Yes. Saban repurchased the franchise, because it was dead for a while. Disney made the last season in 2009 and they were like, ‘We’re done with Power Rangers.’ A couple of years later, Saban came in and bought it back. It was so smart. Now it’s like a multi-million-dollar franchise again.” 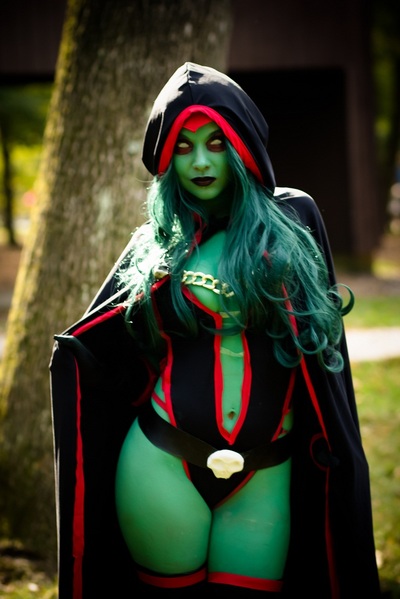 What kind of advice would you give to beginner cosplayers?
– “Even if you’re not good at sewing, it’s a different feeling to make your own costumes. Part of cosplaying is making things. So many people are starting to buy costumes. I think they’re missing the magic of creating something and having that sense of accomplishment. Maybe people should start off slowly, by making smaller costumes. Just have fun with it. Don’t make a costume just because you think people are going to recognize you for it. You’re going the wrong way, if you do that. Just do what you love and fun will come with it.”

What are you currently geeking out to?
– “Kill la Kill.”

What are some of your favorite anime?
– “Macross, Sailor Moon, Ghost in the Shell, Tenchi Muyo!… the whole Toonami block on Cartoon Network, with the exception of The Big O. That was not a good anime. It was weird. Attack on Titan is a new one I watch. Kill la Kill is hilarious. I still watch anime, but my tastes have changed. Back then I could watch silly stuff, but now I like the more serious, plot-oriented anime.”

Are you a gamer?
– “Yes, but lately, since this cosplay thing has blown up so much, I haven’t been playing that much. I’m a big Halo, Bioshock and Galaga fan. I have a Super Famicon-Nintendo hybrid. I have an XBOX 360. I’m not a Playstation person. I had a Playstation and Playstation 2, but I never got 3. I never liked the system. I’m hearing a lot of stuff about Titanfall. It looks like Halo to me, so I think I want to play it.”

What comics are you currently collecting?
– “New Warriors, Arana… anything with Spider-Woman. I like the older stuff, too. I really need to get Blackest Night. I’m trying to find that for a good price, which is impossible.”

If you had to choose, which is better: The DC Comics Universe or the Marvel Cinematic Universe?
– “That is a good question. I think I’m leaning more toward Marvel, right now. I’m not one of those people who are like, ‘Team Marvel! Team DC!’ Right now, Marvel has some really good stories coming out. New 52 has been confusing me. Every time I get into something, they cut it off. It’s hard to follow.”

How do you feel about comic-book movies changing their canon?
– “I’m easy with that kind of stuff, because I know Hollywood will always change something up, when it comes to the stuff that we like. I feel like that’s fine. So many people get angry about it. I loved the Thor movies. I liked The Avengers and the first two Iron Man movies. I mean, I liked Man of Steel. Some people didn’t like it, but I liked it. I’ve watched it 100 times… let me stop trying to downplay it (laughs).”

What conventions will you be attending next?
– “I’m going to Megacon for fun — you’ll probably see me with the comic dealers, trying to complete my collection — and then I’m going to Emerald City Comicon as a guest. Later on this year, I’m a guest at Alamo City Comic Con in San Antonio.”