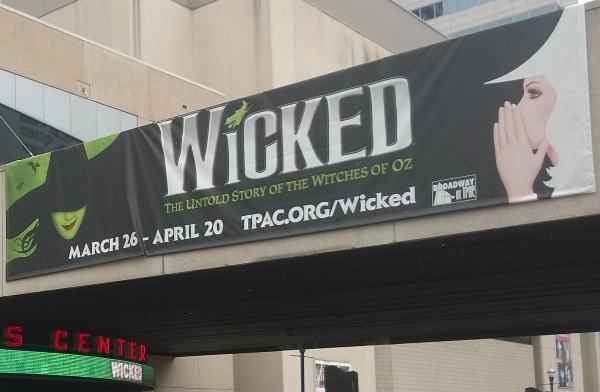 Per Matt
Opening today and running until April 20, Wicked returns to the Tennessee Performing Arts Center for a four-week performance. This marks the very first Nashville appearance for the First National Tour, even though the show will be making is third overall appearance in the Music City. which

With the touring crew quickly unloading their 14 semi-trailers and while they were quickly assembling the multiple sets nearby, I spoke with Company Manager Steve Quinn and Stage Manager Rolando Linares, both of whom have been working with the touring production for the past nine years. Both gentlemen preview the show’s return to Nashville and give a little bit of behind-the-scenes information, as well.

In your opinion, why are people are drawn to Wicked?
– “That’s the hardest question to answer. There’s so many different things that people are drawn to. Probably the major thing that seems to resonate with people is that we’re all a green girl, at some point. We’ve all grown at that point where we’ve been awkward, we don’t quite fit in or we’re just not a part of the group that we’re supposed to be a part of. I think the story of Elphaba is one of those that we can all relate to. Whether we can’t get the right boy or girl in our life or we’re just not the right fit, we have to figure out how to find that inner goodness… just to accept ourselves as who we are. I think that’s what our show celebrates. She realizes she’s green and she makes no qualms about it. She does what she feels is the right thing. I’ve heard a lot of people can relate to the green girl, but a lot of people can relate to the pink girl, too. Even they have their green moments, too.”

“Whether or not you’re familiar with The Wizard of Oz, there’s a lot of comedy in it, which I think a lot of people don’t realize, if they’ve never seen it before. It’s about friendship, it’s about relationships. It’s a love story, basically, at the core of the musical.”

This will be the second time I’ve seen Wicked. Will I notice anything new?
– “Certainly, there’s different performers. The interesting thing about seeing the show on repeated visits, when you see the show for the first time, you’re caught up in the story. I always say you’re focused on the green girl and the pink girl. If you come to it a second time, because you know the story, you can let the entire musical kind of wash over you. You’ll start to notice more of the costumes and the ensemble. All the costumes are different for the ensemble. There’s always something to see in the show. Even with me, nine years later, there’s still things I discover, that I had never noticed before. That’s the cleverness and intelligence of our design team.”

Wicked, the musical, is based on a novel. Have you heard of any stage productions based on the sequel books?
– “Not that I’m aware of. Gregory Maguire wrote four books in the series. A couple of years ago, he was writing Out of Oz, and he told me, ‘It’s time to put that chapter to bed.’ I can’t answer for Mr. Schwartz, whether he feels like you can musicalize them. It’s hard to have lightning strike twice. I know other Broadway shows have tried with sequels and they’ve never really quite panned out. I’m not familiar with Gregory’s other novels. I know their premises but don’t know if they lend themselves to musicalization, but who knows.”

Phantom of the Opera and Wicked are two of my favorite Broadway shows and both deal with genre elements. Do you see this as a trend or is it something else?
– “The thing that parallels both of them is the Phantom is kind of misunderstood and is a little disfigured. That doesn’t mean he’s not a nice person, inside, and isn’t capable of loving. Phantom has the love triangle between Christine, Raoul and the Phantom. We have the love triangle between Glinda, Elphaba and Fiyero. You can certainly draw parallels between the two shows. One is done in a very operatic style and ours is done in a very pop and contemporary style. There’s a triad of people vying for each other’s affections and I think that’s, ultimately, what really works.”

When I saw Wicked in Los Angeles, David Garrison (Married with Children) was the Wizard and totally surprised me.
– “Mr. Garrison started on our tour and then did the L.A. production and the Broadway company. You probably saw Megan Hilty, too. She started at the New York Company, but we get a lot of people to come play with us on tour, which is a lot of fun.”

There’ve been many great actors who’ve come from your traveling production, over the years. Who are some of the previous featured performers?
– “We’ve had Richard Kline, who was Larry of Three’s Company, who was amazing. We had John Davidson, from That’s Incredible and Hollywood Squares. His first shows were on Broadway. It was nice to have him for a while. The fact that Idina Menzel has become a household name in the last month, people are anxious to hear the songs that she sang, in our show.”

Tell me a little about the manpower to get the sets created and all the actors in the right places.
– “Just to get the show in and out of the theater, there are 14 semi trucks that carry all of our costumes, lights, sets and scenery all over the country. In about a day or two, the guys get it all in. It’s an entirely different show backstage, but it’s just as choreographed and just as frenetic. Everyone, who we travel with, is professional. Everyone knows exactly what they’re doing. It’s the best crew that I’ve ever worked with.”

I’m sure it varies, but what would you say is the average number of costume changes per performer?
– “It totally depends on the person. Some people are constantly changing clothes, especially the ensemble members. Some are changing 10 to 15 times during the show, into different outfits. Sometimes they don’t even have time to run backstage to change. They run right off the stage, change right there and run back on.”

What can we look forward to on opening night in Nashville?
– “The cast we have is really amazing. Everyone’s top-notch. They work really well, together. The orchestra, I’m sure, will be great. I mean, you’re known for your music, right? It should be a beautiful show. And if you’ve seen it before, there’s always a chance to see other people interpret the roles. If you haven’t seen it before, what are you waiting for? It’ll be a great show and it’s got a great message, too. It’s not just a spectacle.”

What’s your favorite moment of the show?
– “I don’t have a specific moment in the show. I like to be in the lobby, after the show, seeing kids who are learning not to judge a book by its cover. That kind of stuff keeps me checked in again, when I’ve been doing this for a long time.” 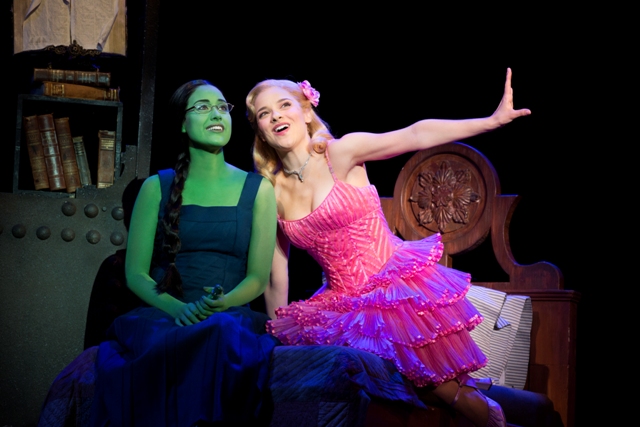