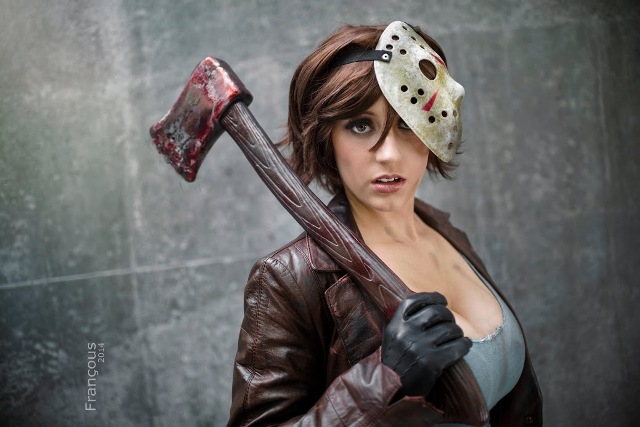 Per Matt
She works in the video game industry by day and transfers her fandom into incredible cosplay creations by night. Abby Dark Star is our Cosplayer of the Month!

I managed to track down Abby at Dragon Con, after she had just wrapped a panel, discussing the details of crafting an elaborate new costume. Find out more about her in our interview.

Please tell me the origins behind your name, Abby Dark Star.
– “Back in the day, when there was ICQ, chat boards and Yahoo groups, I was Lady Dark Star and when I started going to conventions, people began knowing my first name. So, I just merged the two, the old and the new: Abby Dark Star.”

How did you originally get introduced to cosplay?
– “I have been doing cosplay for 10 or so years. It seems longer. I was a theater major from middle school and high school, all the way through college, raised mostly by my Dad, who was a stay-at-home Dad. We watched Doctor Who, Star Wars and Star Trek. We did everything together. Those things met cohesively when I went to my first convention and I saw people in costume. The very next year, I was in costume and ready to go. Down the rabbit hole I went…”

Were you wearing a costume at that time?
– “That was without a costume, but then on the second day, I went as Anita Blake.”

Was that your first costume?
– “It was Anita Blake. It was horrible. It was an iron-on t-shirt with a jacket. Nobody knew I was cosplaying at all. The second costume I did was a Poison Ivy costume that I completely created myself. It began snowballing from there. I’ve lost count how many costumes I’ve made.”

What costumes are you most known for wearing?
– “Poison Ivy, Thor Bunny from The Avenger Bunnies, Satele Shan, oddly enough, I’m known for a lot of body-painted costumes and I did a female Master Chief — Jane-117.” 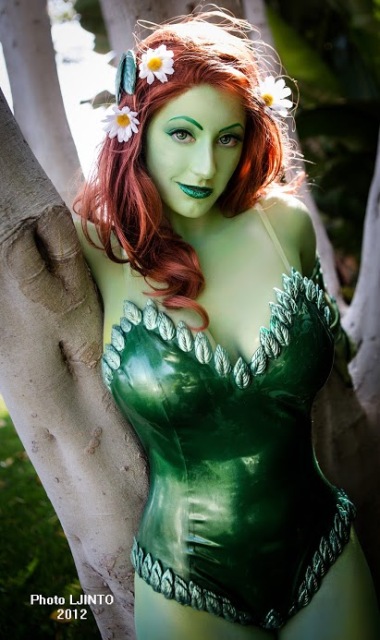 What are some of your cosplay inspirations?
– “I really take a lot of inspiration from artists, themselves. Jim Lee, Frank Cho, Mike Silvestri, Mark Brooks… these artists who’ve been around for so long and draw women so beautifully, but also so strong. They’re not afraid to be sexy, as well as strong, and I really admire that aesthetic. I really think that women can be both. I like a lot of classical art and period pieces. If it has a good pair of boots, I’m probably going to do the costume. I like a challenge and bringing things that aren’t a reality, into reality.”

Do you make all your cosplay creations?
– “I try to. My husband and I are a team. We make everything together. I do more of the soft parts and he does the sculpting, but then again, we support the cosplay community. Why reinvent the wheel? If there is someone who has done an amazing mask, why would I spend $400 on clay, silicone, urethane in order to kind of make a version of my own, when they’re doing a good job and it’s their business. So, we try to make as much as possible and if we can’t, we try to support the community as much as possible, in order to help make it grow.”

What cosplay projects are you currently working on?
– “We are working on the Red Sonja Project. About a year or so ago, at San Diego Comic-Con, I got inspired by the Red Sonja Sideshow statue. It’s very intense, a lot of leather and wool. She’s just so strong and so beautiful. I wanted to make the costume, but I didn’t want to just make it. I wanted that statue to step out, into reality. So, we’re working with Tandy Leather to figure out what leathers to purchase, but we are taking the costume, from the ground up and building it: Wools for the cape, materials to sculpt the necklaces and the arm bands. We actually had custom aluminum cut, in order to make the chainmail. We’re actually going to be working with a custom wig company to develop the wig, because her hair is multitudes of color, depending on the angle. It’s going to be quite the project.”

What kind of advice would you give to beginner cosplayers?
– “Take your time. Don’t freak out. Start with a first costume that you really, really, really love, because there’s going to be times where you want to throw it out of a window and cry. If you don’t love it, you won’t want to keep going and you’ll get discouraged. Really love it.”

Do you ever moderate panels at conventions?
– “Yeah. We normally do a couple of panels. One is called Craft Your Fandom, which covers the project planning of costuming. How a person can get involved, how can they cosplay, what can they do, how do they start, budgeting, storyboarding, research… everything. We cover all that.”

“The other one is called Sexuality in Cosplay, where we talk about themes of men, women, transgenders and the gay and lesbian community, how they are fitting into our community and how we can help support our fellow geeks and make this a place of acceptance, rather than a place of division.”

What are you currently geeking out to?
– “There’s a list. I’m on a big Archer kick, right now. We just attended the Archer group, last night, which was amazing. We were in the room recording Dubsmashes. Because I work in the gaming industry, I’ve been geeking out with Assassins Creed a lot. That’s been the main heart-and-soul focus, lately.” 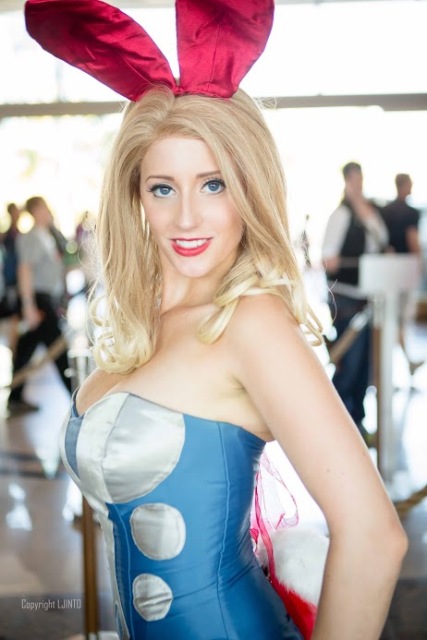 What’s your role in the gaming industry?
– “I’m a digital marketing person for Ubisoft. I’m the one who’s putting out the messages about the games and trying to help people get interested in them.”

Obviously you’re a gamer. What are some of your favorites?
– “When I game, I relax, so I like to play WoW, Skyrim, the old-school Oblivion and Little Big Planet. I love playing Assasin’s Creed. Halo is one of my favorite games. Tetris is my ultimate unwind game, which I can play for hours and hours. I’m also a table-top gamer, so I like to play Magic: The Gathering and a little bit of Pathfinder.”

What are some of your favorite comics?
– “Lately, I’ve been reading a lot of indie comics, like Saga, Chew I just picked up. I’m loving Rat Queens. That book is so hilarious. I fell off the DC-Marvel wagon when they started The New 52 with DC. I couldn’t get into it, even though I was really happy about the Birds of Prey series. For Marvel, after the Skrull Civil War a couple of years ago, I couldn’t get back into the universe, although Black Widow has been amazing. I’ve been reading a lot of Red Sonja, obviously, because I’m doing the costume.”

Which do you enjoy more, the DC Cinematic Universe or the Marvel Cinematic Universe?
– “The Marvel Cinematic Universe. They have fun. There’s enough in there for the hard-core fans, but they also can translate it to the new fans, making them want to get into the comic books. I mean, I never really read Guardians of the Galaxy, but after seeing the movie, I got the omnibus, so I could go back and read it all. Marvel has a better time of grabbing their fans, holding onto them and pulling them in.”

Are you an anime fan?
– “I am. Kill la Kill is one of my absolute favorites. I love Senketsu! I like the classics, like Sailor Moon, Star Blazers, Samurai Champloo, Super Sonico, which I wore a costume from last night, Freezing is really, really good and Gurren Lagann, of course. I’ve actually really been enjoying Knights of Sidonia, which is a Netflix original anime. A lot of the artwork was done by the animators who animated the dogfights on BSG, so they’re really, really cool. There’s a lot of mechs. I love mechs.”