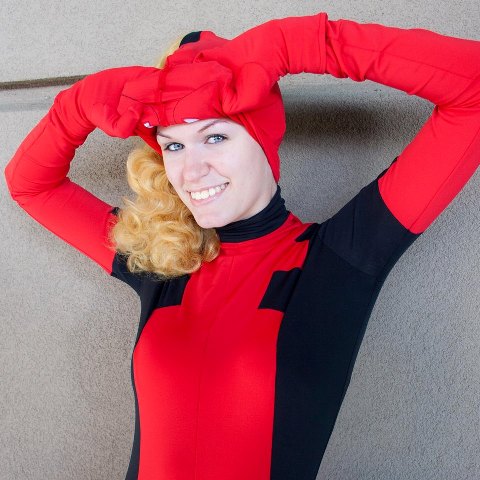 Per Matt
Who, exactly, are the D20 Girls?

The D20 Girls Project is a non-profit organization that promotes a positive image of female geeks throughout different communities. Recently, at Sukoshi Con in Bowling Green, KY, I visited with Cheshire, who is an active member of the D20 Girls and an avid gamer. In our interview, she discusses competing in tournaments, offers a theory why Fallout 4 will never get made and reveals where she’ll head during the Zombie Apocalypse!

Is this your first Sukoshi Con to attend?
– “This is actually my second Sukoshi Con. I’ve been going to conventions for about five years, now. This is the first time they’ve had it in Bowling Green. Pokecon, in Louisville, was the first one. That was also the first time I was a guest at a convention.”

How many different groups of D20 Girls are there?
– “The D20 Girls are state based. I’m with the Kentucky D20 Girls. Division 20 is kind of like our sister group and they’re national.”

What kind of conventions have the D20 Girls attended in the past?
– “Personally, I’ve done Pokecon, Kentokyo Con and I went to GMX, since the Tennessee D20 Girls weren’t there. We had an opportunity to set up a table there, but we didn’t. Since we’re the Kentucky branch, we can only go to cons in Kentucky. I’ve only been with this group for a year and a half, now. This is my third convention with them. We’ll do any type of convention: comic book, anime, anything like that. We have a full list of things we like to do. You can join the D20 Girls as long as you have a specific fandom.” 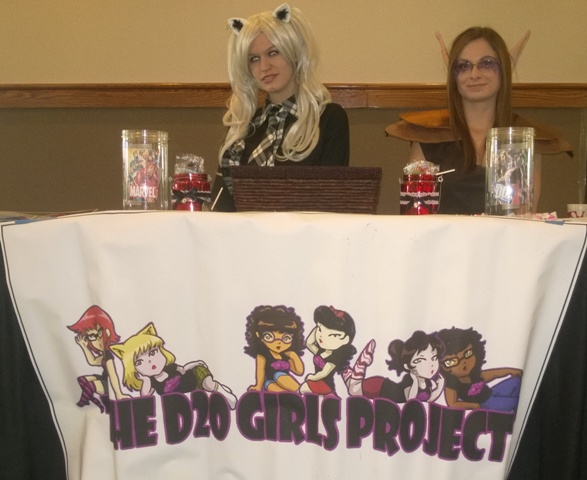 Do you have meet-up groups?
– “Yes. We had meet-ups a couple of months ago, where all we did was watch Dr. Who. We have Marvel movie nights; we have DC movie nights. When a new movie’s coming out, we’ll watch the movie together.”

Does your group ever have meet-ups with the general public?
– “The Local Gaming Store is doing the table-top room (at Sukoshi Con) and since I live nearby, every now and then, The D20 Girls will host an open card-game night at the Local Gaming Store.”

Have the D20 Girls arranged online video game sessions that people can join?
– “Sometimes we hang out in convention gaming rooms. Personally, I play Cards Against Humanity with whoever’s willing to sit down and play. It’s my favorite game. I’m also really good at DDR, so I’ll play that a lot. I’m really good with Halo, so I’ll do Halo tournaments, representing the D20 Girls.”

What characters do you cosplay?
– “I like to play Cheshire when I’m working the D20 table, I have my Lady Deadpool outfit that I worked really hard on, I have a Tifa Lockhart from Avent Children, Aries from Fairy Tale, I’m working on Sawa from Amnesia, I’ve got a Glaceon outfit, a Vault 0 Fallout suit and Pip-Boy and an Evil Red Riding Hood.” 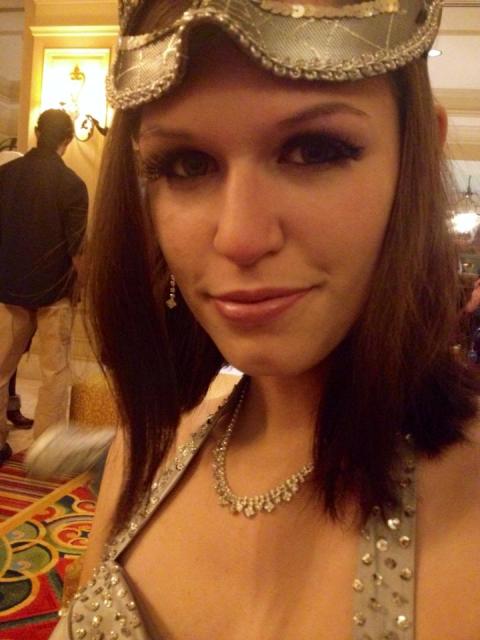 What’s your favorite type of video game?
– “I really like RPGs and first-person shooters.”

What are you currently geeking out to?
– “Fallout. Right now, I’m playing New Vegas. I’ve not finished the DLC, so I’ve been cramming in DLC time.”

What’s your favorite video game?
– “My favorite game is Fallout. I actually have two panels about Fallout, today, and a full Fallout cosplay.”

Do you think Fallout 4 will be released anytime soon?
– “I have a theory as to why we don’t have it, yet. Vault 77 was just a huge joke in the gaming community because each vault was a different social experiment. In this one, all that was allowed in was one man and a crate full of puppets. We just thought that was so funny, we kept bugging Bethesda about making merchandise for it. So, they made us a Vault 77 hoodie that came with a puppet. Bethesda is going to hate us for that. This was supposed to go unnoticed and we brought it to attention. We’re not going to get Fallout 4 because Bethesda hates us now. (She laughs)”

What do you like the most about Fallout?
– “I’m a history major. Up until 1945, the history of Fall Out is the exact same as American history and then it branches out into this Apocalypse thing. I’ve always loved the Apocalypse.” 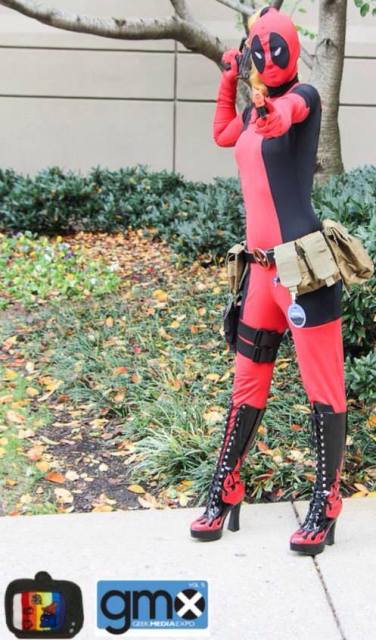 What will you do when the Zombie Apocalypse arrives?
– “I’m good to go, because I’m an Air Force brat. Basically, we have an armory in our house. We live on a shooting range. I’ve got stockpiles of MREs and everything. I do not have a bug-out kit, though. I’ve been looking at getting one of those, just because it would be fun to have. My sister and I have a drawn-out map, for what to do, when the Zombie Apocalypse hits.”

Where will you go?
– “We will be staying at my house. But we’re also going to try to go to an old elementary school nearby, that’s abandoned. It would be cool to go there and have some more space.”

Who’s your favorite character on The Walking Dead?
– “I really like Glenn, but I kind of like T-Dog a lot, too. He’s really cool. Michonne is awesome.”

What kind of advice would you give to beginner cosplayers?
– “The thing I always tell people who have never been to a convention before: There’s absolutely nothing to be afraid of. It doesn’t matter if you’ve got this huge, elaborate costume or if you’re just wearing a t-shirt and jeans. You’re going to make friends. People are going to want to hug you. People are going to want to take pictures with you. That was the thing no one warned me about, at my first convention. My sister picked out my outfit for me. I didn’t know who I was cosplaying and this girl runs up and hugs me, says she loves me, then walks away. I’m like, ‘What just happened?'”

“Everybody here is a really big family and we’re all supportive of each other, even if we’ve never met before.”

Is there anything else you’d like to add?
– “Cosplay is the best way to make friends. Even though you’re from different states, if you travel in the same kind of circuit, you’re going to see each other again. It’s really cool to be at a convention and to run into people you’ve met before. It’s a lot of fun.”