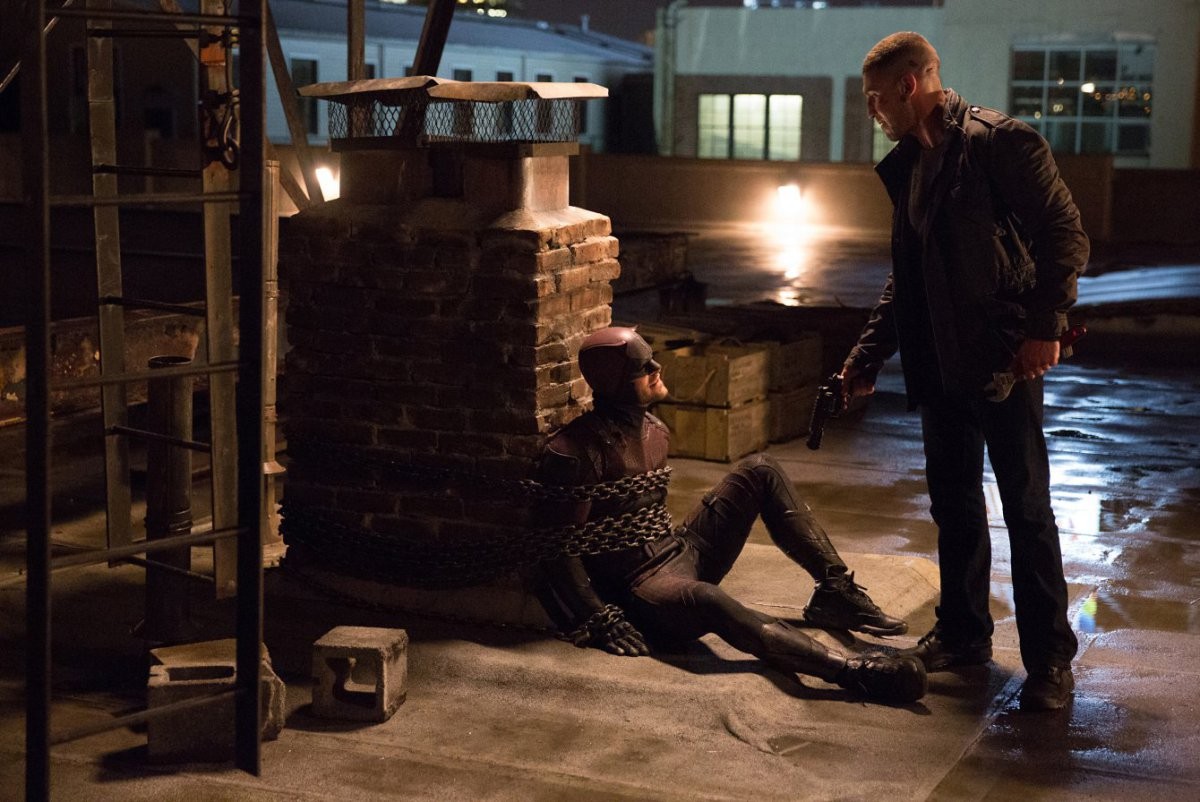 In the last article I posted, I closed by mentioning that Jon Bernthal could give the greatest portrayal of The Punisher anyone has ever seen. I was right.

The amount of screen time given to Bernthal in Netflix’s acclaimed Daredevil series only enriches Frank Castle’s story, in a way that features haven’t been able to do. Not only does the TV show create a polished Punisher, but Jon also maintains a dynamic representation of everything apparent in the character. He is sympathetic in one scene and ruthless in the next. All of the movies have him as either one or the other. To understand Frank Castle, viewers must understand what motivates him. He isn’t bloodthirsty for the sake of violence. He is vengeful and willing to cross the ethical lines most won’t, in order to ultimately better the world; not to mention he is methodical and trained to bring the war inside of him to New York’s lowest criminals. This reason is what makes him a great antihero to Daredevil’s more righteous form of justice.

The role of justice, itself, is a huge theme for the second season of Daredevil. Matt Murdock seems to juggle a lot of morally conflicting ideologies in his day-to-day life. One day he may suit up and beat the hell out of gangsters and thugs, the next he’ll be representing the worst of them at his law firm with partners Foggy Nelson and Karen Page. Aside from his career and vigilantism, being a devout Catholic also creates a lot of his principles. In short, Matt seeks justice in every form, be it political or religious, until neither is sufficient for him. Daredevil embodies the buffer — the checks and balances of the world around him. Once The Punisher enters the mix as judge, jury and, of course, executioner, everything Daredevil believes in is shaken up.

In one encounter with Frank Castle, Daredevil finds himself chained to a brick structure atop one of Hell’s Kitchen’s rooftops. In a heated verbal back and forth, the two hash out the reasons why their ideologies are superior to the other’s. When asked if he ever doubts himself, doubts whether killing criminals is just, Frank takes no time to respond, “Not even for a second.” He continues, “I think you’re wrong… I think there’s no good in the filth that I put down, that’s what I think. I think this world, it needs men that are willing to make the hard call… I do the one thing you can’t. You hit ‘em and they get back up. I hit ‘em and they stay down.”

Returning to the scene, Frank gives Daredevil the chance to make the hard call. Pulled straight from 2001’s Punisher #3, Frank duct tapes a gun to Matt’s hand with an ultimatum: Murdock can either save a man’s life by killing Frank or let Frank kill him, involuntarily letting the man die.

The Punisher isn’t the only new addition to the Netflix series. Elektra Nachios is introduced a few episodes into the season with her own agenda to complicate Matt’s life. With a nightly itinerary, Elektra acquires the aide of Matt in investigating some shady business going on with her father’s company and the Yakuza. Their investigation eventually reveals that the targets are not actually Yakuza, but members of a highly trained gang of ninjas known as The Hand. Throughout Elektra’s storyline, she’s depicted as a pompous and spoiled rich girl who won’t take no for an answer. Despite her character’s arrogance, she has a heartwarming chemistry with Matt that is unique and thrilling. Being appropriately skilled like Murdock also makes for exhilarating fight sequences against common foes.

Season 2, overall, has a lot more moving parts than the first series. Each supporting character is given more to do and even some familiar faces from Season 1 make their way back into the plot. Multiple storylines veer apart and come back together while some stand alone. The whole feel of the second season resembles a volume of comics that were brought to life. One of the more off-putting aspects of Season 2 is the amount of suspension of disbelief viewers must endure, in order to enjoy the story. From the way the judicial system works, to the perceived understanding of Matt’s powers, inconsistencies will pop up from time to time. The other pestering drawback to Season 2 is the amount of questions that are left unanswered. Surely Season 3 will return to these plot points, but while some shows would do this sparingly, Daredevil seems to have a fair amount of lingering issues.

Season 2 has undeniably stepped up the saga of Daredevil. There are more awesome fight sequences, higher stakes and an evolving burden for everyone involved in Matt Murdock’s world. While everything in Hell’s Kitchen seems to be under Daredevil’s control, the threat of truly life-changing events seem inevitable, come next spring. Then there is the ever-constant movement toward The Defenders series that will connect all of Marvel’s Netflix heroes together.

Netflix is on a roll, and years down the road, original shows like Daredevil may be glossed over, since Netflix is in the business of making amazing television.