Death of a Salesman by Nashville Repertory Theatre 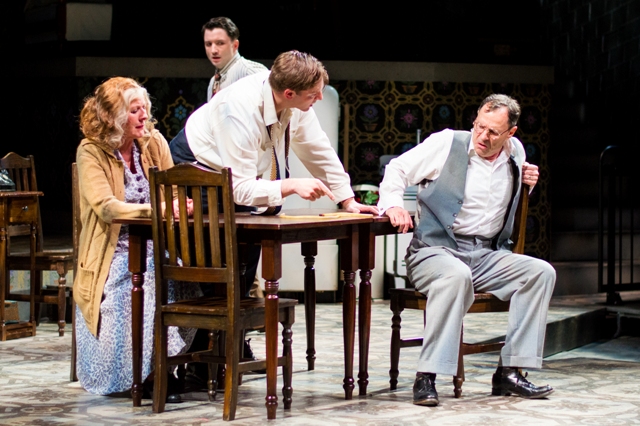 Per Matt
Dramatic, painful, tragic, failure, unstable, wisecracking, dismissive and difficult. Individually, each of these words represents different story elements, but together, they help create Death of a Salesman.

Based on the 1949 Arthur Miller play that has won multiple awards throughout the years, Death of a Salesman is currently appearing in the Andrew Johnson Theater of the Tennessee Performing Arts Center through March 28th.

Each member of the Loman family years for a different version of the American Dream, while simultaneously enduring the same result. Willy is the patriarch of the bunch, as well as an exhausted salesman who’s having a difficult time dealing with reality. Biff is the older son who has lost his youthful confidence and doesn’t understand why he constantly battles with his father. Happy is the womanizing younger son of the family who’s generally ignored by the others. And Linda is the matriarch whose steadfast support holds the rest of the family together.

Was it guilt that killed the salesman or was he already dead inside? Attempting to compartmentalize the storyline while trying to describe it is virtually impossible. There is a lot of family drama going on, with each member of the Loman family striving to become someone they are not. There are many extremes present and accounted for, especially guilt, suffering and yearning to live a better life. Each of these elements, along with many others, practically leads each of them to their doom.

There is a drawn-out sadness in the play that never quite seems to end anywhere but with a tragedy. It’s a shame that none of the main characters are allowed to live happily ever after.

The struggle is real, for each of them. Willy’s state of mind is fading, suffering with hallucinations and flashbacks on a day-to-day basis. Biff just wants to settle down, but doesn’t realize what keeps preventing him from doing so. Happy constantly attempts to keep the others in a positive frame of mind, but is incredibly unsuccessful. But it is Linda who seems to be the most level-headed and supportive of them all — a person everyone should have in their lives — whose role is terribly underused. If only she could have been given the opportunity to straighten each one of them out…

The audience suffers along with Chip Arnold’s Willy, Eric D. Pasto-Crosby’s Biff, Matt Garner’s Happy and Rona Carter’s Linda and for some, like me, the characters hit a little too close to home. Unfortunately, I relived many painful moments of my youth during the performance. Even though I related to each of the Loman’s personalities, I felt like I was on the stage with them all, experiencing their pain as my own. And at different times during the performance, the burden was just too much to bear. That’s some great acting, for sure.

While the idea of a traveling salesman seems incredibly antiquated in this day and age, the Nashville Repertory Theatre does a fine job of taking the audience back to the days before Amazon and eBay. Expect an incredibly emotional evening while visiting TPAC, to say the very least.