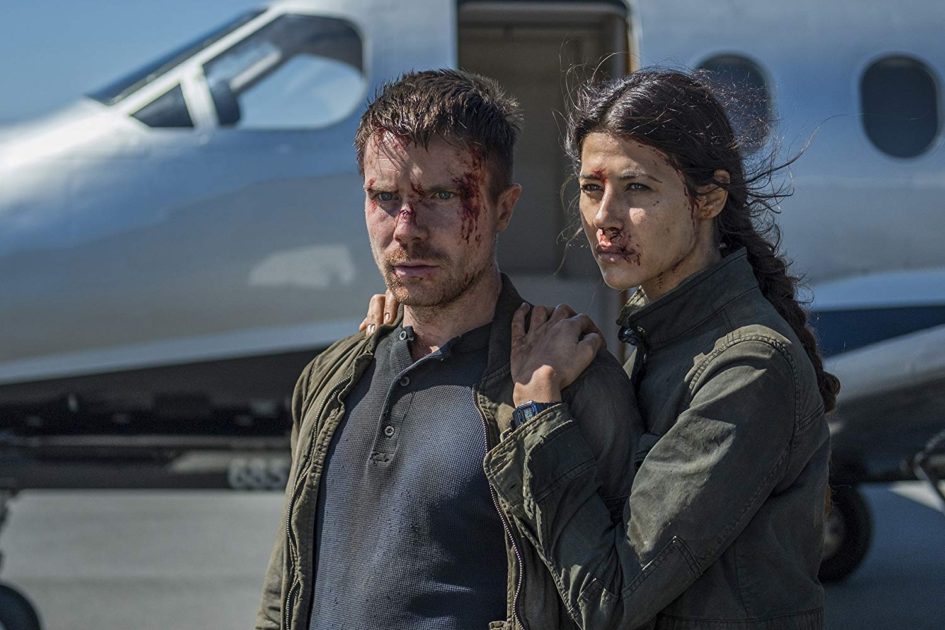 Joe Dempsie and Karima McAdams always seem to get into trouble while seeking the truth in Deep State Season 2. Photo Courtesy: EPIX.

Who are the real people who run the country? Not the ones who give never-ending press conferences and social media posts… it’s the government agents working overseas, acting with our country’s best interests at stake. It’s the government contractors who control the military spending bills and the senators who often feel like pawns in the whole game. As a series, Deep State can be complicated to describe to someone who’s new to the show, but Season 2 can accurately be summed up with dialogue from “A Dead Man’s Machine,” the season finale: “Everybody flips in the end.”

Cash and chaos, the war on terror… it’s all the same. Such is the name of the game for Deep State, the powerful sociopolitical thriller that airs on EPIX. There’s back-stabbings, double crosses and plenty of global politics. Independent contractors have infiltrated the CIA, making billions of dollars via wartime activities, acting on the government’s behalf. CIA agents are working different angles, funneling arms to terrorists and creating problems the U.S. military must clean up. Friends turn into enemies, enemies become friends and everyone else becomes frenemies as the power players’ allegiances seem to be constantly changing throughout the eight-episode season.

Continuing from Season 1 (Deep State Takes a Deep Look at the Politics of Intelligence), Harry Clarke and Leyla Toumi are no longer an item, but recent events have forced a rocky reunion, which in turn has them back on the lam, running for their lives. Season 2 is full of time jumps, as it’s both a sequel to the previous season AND a prequel, detailing how Clarke (Joe Dempsie) and Toumi (Karima McAdams) initially met. Through flashbacks and flash forwards, the game of political cat and mouse never ends, as the pair attempts to follow the money in order to get to the truth, leading up to so many cliffhangers!

As a series, Deep State showcases gritty realism that’s rough to watch, at times. These two agents know how to take a punch or two, as looking battered, bruised and bloodied isn’t a bad thing for either one while they get out of the frying pan and into the fire. The ticking-clock concept is always a good one, as time is constantly running out and our main characters are always seemingly one step in front of their enemies. The explosive season finale finally wrapped the storyline up nicely for our heroes, leaving a final loose thread for a possible third season dangling in front of the viewer as the credits roll. Season 2 was more difficult to get into, as it’s emotionally easier to get sucked into a new TV show when a character has direct family members getting threatened (as in Season 1), but basically dealing with revenge while unraveling a complex conspiracy took more patience and willingness to explore with all-new characters.

Speaking of new characters, Nathan Miller (played by Walton Goggins) has a complex duality, balancing private and professional lives, all while portraying both a sympathetic good guy AND a bad guy. While I didn’t really care for the character of Senator Meaghan Sullivan, who attempts to uncover the layers of governmental lies (although she does move the present-day story forward), I did enjoy the spunkiness of her aide, played by Kae Alexander — I can’t wait to see her featured on the big screen sometime soon!

“There is no Deep State… just a bunch of old, white guys, clinging to power, doing everything they can to protect their interests before they become extinct.”

There’s fewer time jumps as the season progresses, plenty of paranoia, as well as some father issues, referencing the past season. And by the time Pip Torrens finally makes an entrance as one of the show’s top power players, he steals every scene he’s in. I only wish he could have been featured even more. If there’s another season, here’s to hoping he receives a featured role. And the adage that once the government gets its hooks into you, you can never really get out…

“Haven’t you heard? Truth isn’t truth anymore. You can pick any version of it you want.”

Showcasing premium programming, EPIX features the modern-noir series Perpetual Grace, LTD, the crime-comedy series Get Shorty and the excellent docuseries, PUNK. If you don’t receive the EPIX station in your cable or satellite package, you can use the EPIX NOW app for Apple and Android devices to watch the channel’s programs. It’s $5.99/month, but users can get a free seven-day trial. So, there’s no excuse in missing out!