Far From Home Takes Spider-Man on an Emotional Journey 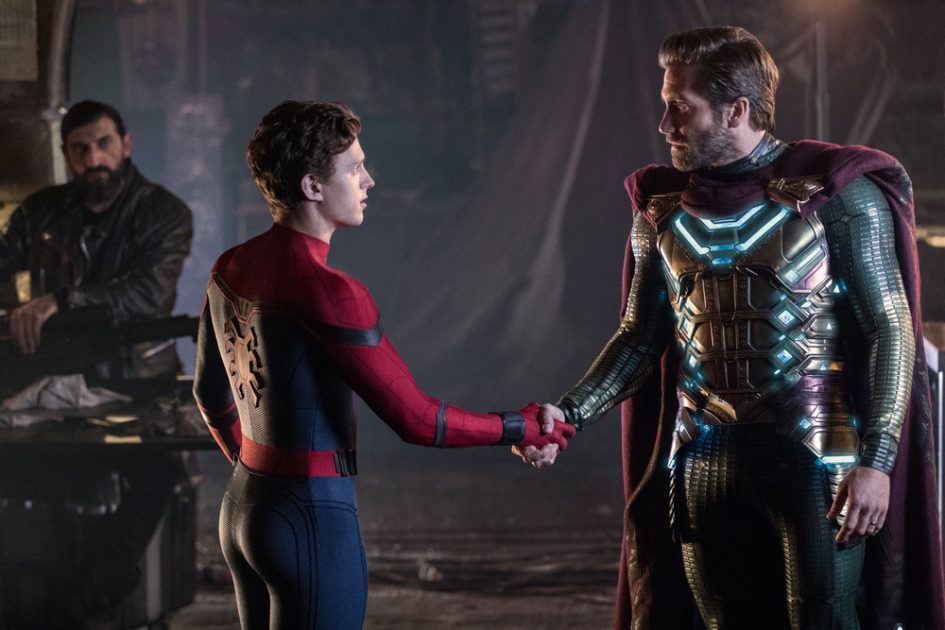 Per Matt
When do superheroes actually get to take time out of their busy lives in order to decompress and leave the crimefighting to others, if only for a little while? Peter Parker attempts to take a vacation, live his life as a teenager and deal with the loss of a family friend, but Nick Fury infiltrates the best-laid plans of mice and men, sending them awry in Spider-Man: Far From Home.

This, the second Marvel Studios-Sony Pictures collaboration, is a starkly different movie than its predecessor, Homecoming. As a sequel, Far From Home takes Peter (Tom Holland) on two journeys. On a European field trip with his classmates, Parker hopes to jumpstart his personal life, as his friends (and enemies) have all returned from the “blip,” but it may be too soon, as he’s still mourning the loss of Tony Stark, whose death is constantly on his mind. In the meantime, the mysterious Quentin Beck arrives, needing assistance, highlighting the attention of Fury and Maria Hill. What’s a webslinger gotta do to relax?

While the trailers for the film look to finally introduce the Marvel Cinematic Universe to the multiverse, something else takes place entirely. This Spidey is different, still a little mopey (but not full Spider-Man 3 emo), the entire movie deals with loss in different ways. Peter’s temporarily lost his spider-sense (referred to here as his “Peter tingle”), and more than ever, Parker must rely on others for help in dealing with his recent Earth-shattering dilemma. Mourning is a powerful emotion and the loss of Parker’s mentor has him temporarily unsure which direction to turn. The entire movie feels like a dedicated love letter to Tony Stark, from showcasing his chauffeur/assistant Happy Hogan (played effortlessly by Jon Favreau) to endlessly discussing how Peter was hand selected as Stark’s pseudo apprentice, Far From Home wraps up Phase 3, and the end credits definitely move the MCU light years ahead of what was previously considered knowledge of the galaxy.

Speaking of Shattered Dimensions, as a comic book character, Mysterio has mainly been portrayed as a low-level rogue, and until now, he hasn’t appeared on the big screen before. While Quentin Beck’s backstory doesn’t quite merit the character a supervillain, Mysterio has disrupted multiple universes long before Spidey went Into the Spider-Verse in Spider-Man: Shattered Dimensions. That video game gave Beck a better storyline, but Far From Home does give the character a pretty good one.

Spider-fans, beware! There’s not a lot of jokes by Peter Parker throughout the movie, but Aunt May seems to have the best one-liners (among others) at the beginning of the movie. It’s weird seeing Peter without his signature zings, but the character (and the audience) seemingly gets through it all, nonetheless. It just feels different and not quite as fun, when compared to all the other Spider films.

J.B. Smoove has some great ongoing witchcraft cracks, but my only complaint lies with the movie’s advertisements. The #DontSpoiltheEndgame campaign was mostly a success, with the exception of the Far From Home trailers. As a MCU fan who didn’t get to movie theaters within the first two weeks of its release, an endless barrage of Sony’s commercials provided the ONLY spoilers for Avengers: Endgame that I had seen in eight weeks. To say that I was very disappointed to be spoiled from a rival studio is an understatement.

Spider-Man: Far From Home is a movie that fans of the Marvel Cinematic Universe will most likely enjoy very much. I just wish its trailers hadn’t spoiled my Endgame.